One Sunday in March this year I had the misfortune to endure the train trip from Hell.  I'm 50 years old.  I have spinal canal stenosis in my cervical and lumber regions of my spine, an arthritic right hip, Asthma, Angina and Im also in the early stages of possible Emphysema.  I am currently on the NHS waiting list for hip replacement surgery at The Kent and Sussex Hospital in Tunbridge Wells, and MRI scans at Haywards Heath Hospital to see if they can carry out surgery to relieve pressure on my spinal cord.  Im pretty much in constant pain as I'm sure you can imagine.

I had been to my native Black Country hometown of Tipton for an old schoolmates 50th birthday party and had caught the 08.59 train from Tipton to Birmingham New Street Station.  I was hoping to catch the 10.00 train from there to London Euston.

As the train approached the platform at New Street, along with my fellow passengers I was "shepherded" down the platform away from the first class carriages, by some grouchy jobsworth sort of person with the Catherine Tate Laurens character "I AINT BOVVERED" sort of attitude. 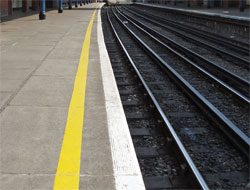 Given that I was using my walking stick and carrying what was for me a heavy bag on my shoulder, I made my way, limping along the platform to the rear of the train.  When I got there, it appeared that all the seats in the carriage were taken, so I started to limp back towards the middle of the train to see if I could spot a seat there, or to pay the 15 to upgrade to First Class (reduced by a third as I have a Disabled Person's Railcard).  The guard blew his whistle at that moment and the train doors closed as I was trying to get on. The train pulled out of the station and I was left just standing there!

To say I was angered is a slight understatement!  I expressed my disgust with the stroppy "girl" only to be told "There were seats right at the rear of the train..."  I eventually got home to Tunbridge Wells some 6 hours after I left Tipton.

Have any other regular train users noticed that you cannot spend five minutes alone on a platform without somebody asking you a complicated question regarding their journey?. People will say to you " oh, have i just missed my train? ". How on earth, can you give an answer to such a question, unless you have psychic omniscience?. One thing I have learned is to never, ever, stand next to a map or timetable, 99% of people will assume you have been specifically posted their as an expert to answer any and all queries.
24/08/13 sideWALK
-4

Foolish enough to be your cust

"and were not a bunch of fools, were accually doing our job properly, if anything, the passengers are the fools!"

I am more than fed up with talktalk-nothing but nothing would get me to recommend this company to anyone. I cannot wait for my contract to end so that I can get out of this company.
Never have Ibeen so frustrated with a company before. I have written letters beause e-mail addresses 'do not work' - they are red herrings. I have not had the courtesey of a reply or even an acknowledgement. My next move will be to contact Oftel-talk talk is a waste of space!!!
12/08/10 Grrrrrrrrrrr..
-1

The bus station at Peterlee is a disgrace; it was opened in 2001 as part of a multi-million pound redevelopment of the town centre and since then it has seen nothing but abuse with windows smashed and the doors vandalised; a few years ago a bus was even hijacked and driven into the doors.

Every time I go into the station there is always a pane of glass smashed somewhere; I then think of Durham bus station and how clean it is in comparison to Peterlee bus station.

To top that, today I saw a young lad smoking inside the station and nothing was done about it; why have laws if they are not enforced?
26/04/10 Dommy
8

No 'Him' we train drivers don't drink cans of larger it's the passengers that do that.

I've now become a train driver just to prove you wrong (OK maybe not....I did it for the money of course (not!)) and get to see ignorant passengers first hand as I pull into the platform and note all the ignorant pax huddled in one area and not spread out.

Stand up out of my drivers seat and spy through the whole observing how empty the front coach is and just about being able to see the next coach and how packed it is.

Ahhh this job is full of free comedy moments.

Oh yes and the free train travel too.

and just to point out that drivers still don't need to spell to actually drive the train as they rarely have to make notes since it's all printed up and ready. OK so we have to spell for incident reports, fault reports, etc but it's not that hard to spell these days...at least I can spell better than some of the illiterate 'Tweeples' on Twitter.
12/03/10 train guard now train driver
-2

My experiences as a 60+ passenger at New Street have always been very positive. I am fit and do not need help but I have seen other passengers who did need help making a connection treated very well by both train and station staff. New Street shouldn't have the bad reputation it has. But it does need modernizing.
26/11/09 New Street's OK
-5

Firstly, I'm not being rude here - just being honest, so apologies if this does sound rude.

You really should have made yourself known to station / platform staff so they know you are boarding the train and not just walking down the platform. The on-board guard who was dispatching the train cannot tell if you've just left from the train or are going to board it or are just walking along the platform (perhaps from a train on the other side of the platform). In-fact, you should have phoned up at-least 24hrs in advance so that special assistance could be arranged for you, which would have meant you not only made it to your train but you could have posibly had a reserved seat on-board the train too.

If you phone up the train company directly and mention that you'd like some passenger assistance and they can arrange it for you (ensure you phone up at least 24hrs before hand!) and as such something like this wouldn't happen. Then all you do is turn up, mention who you are / mention you phoned up in advance and they should know about you already and so can ensure you get on-board the train!

get on 1st then sit

Why didn't you get on the train and walk along the carrage until you found a place that you would like to sit, you would then not have missed the train.

I know Birmingham new street can be an awful station and staff can be less than helpful but you have to help yourself also, and to me you did not do so on this occaision.

It could have been much worse than it was. But you really cannot delay a train just so you can find a place to sit!

The train compay has the monopoly on delaying trains, do you realise just how much planning has to go into coming up with excuses like leaves on the line or the next train is canceled due to whatever reason sounds good, sometimes they don't even give a reason now!

I went by train not so long ago, one journey was canceled for no given reason (although the train had just pulled into the platform) I had to get another connection at birmingham when I saw customer service at the station I told them what had happened guess what the idiot said? "Oh yes we know about the train cancelation, would you like to go somewhere else!" Honestly that is what the train station staff said to me! I complained and got a full refund as I was over two hours late getting to my final destination. I used my vouchers to book another journey somewhere else a few months later guess what the first train was canceled!
20/04/09 get on 1st then sit
-10

You're right of course, train drivers don't need to be able to spell. The ability to guzzle cans of lager and stare nonchalantly at bemused passengers is the only prerequisite for that job.
11/03/09 Him
-4

train guard, I do hope you are joking! Mind you I very rarely travel by train; now I will make sure I never do. I care too much for my life!
11/03/09 grumpyoldwoman
-5

In response to 'Him'
since when did driving a train require you to spell?
some people need to think before they say things. Every one makes mistakes, your just too pathetic to realise that.
11/03/09 train guard
-1

It's completely clear the griper is mentally challenged along with being physically so. Turn up late without a seat reservation and expect to sleep on the platform. Why should you get any special treatment when the train is about to leave? You would cause it to have late running. It's not so long ago that you would be collecting pennies for your journey on the pavement outside the station entrance. Move on there or expect to be brought in for vagrancy. Get in the 3rd class cattle truck and hold your breathe as we run through the tunnels.
08/03/09 Fairness
3

and were not a bunch of fools, were accually doing our job properly, if anything, the passengers are the fools!
08/03/09 train conductor
-1

I am a very customer focused conductor, so I do care alot for anyone who uses my trains. In my opinion, if you have a disabulity, you should make it known to rail staff, as they can then help you. if it came down to it, I would have let him sit in first class for free.
and also, people have to remember, the railway works in a certain way. after the whistle is blown, the doors will close... so make sure your on the train, or be prepaird to wait for the next one!
08/03/09 train conductor
0