I have for many years used a mobility scooter.  A nice solid slow 4 wheeler limited to 4mph and designed for pavement use.

My problem is that I use it on trains from time to time, and the different train operating companies have different rules, which mean that I can go to some places but not to others, even some where Dr.Beeching did not close the lines.

An example of this is that Arriva Trains Wales will (and often do) carry my mobility scooter anywhere on their system.  Great Western Trains (formerly First Great Western) refuse to carry my mobility scooter anywhere on any of their trains.  This means that I can travel from Cardiff to Newport or Swansea but only by some of the trains and I need to know which company provides which train. 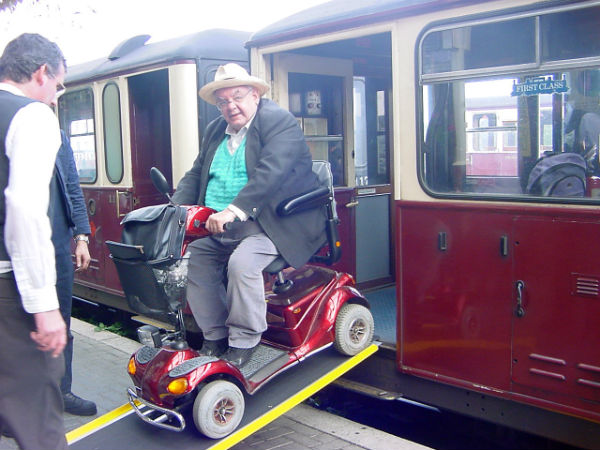 The epitome of this madness is that the route from Cardiff to Southampton used to be part of the Welsh franchise, but was moved to the Great Western one by an administrative act.  That meant the top bosses were different but the staff on the trains, the staff on the stations, and the actual trains were identical, but overnight I was no longer allowed to travel on that route.  When I asked why, the answer was that they had "done a risk assessment" but a motor scooter such as mine was "too dangerous".  If I got rid of it and bought a three wheeler version it would magically become safe again.

When I sought advice from a disabled organisation they asked me not to make a fuss abut it or there was a danger that the train companies would get together and agree a common code which would, inevitably, be the least service any of them offered, and nobody in the country would be allowed to use a mobility scooter on any train.

I think I am a reasonable man and do not scream "discrimination" at some of the things I cannt do.  However, on this topic, I have a photograph of me and my scooter being unloaded from the Ffestiniog Railway, one of the smallest railways in the country.

there is movement to ban all mobility scooters. can't come soon enough. they are dangerous take up way to much space and hinder the the accessibility of wheelchair users. they cost more. have a bigger turning circle are heavier. some are over the wait limit for the ramps. some are to wide for them

i have been unable to get a trains as a person parked there mobility scooter in the wheelchair space and walked off down the train.

its easer to use a powerchair than a mobility scooter. just unfortunately scooters are marketed more.
a powerchair can go in shops. buses taxis.

scooters are for pavement and roads only, not shops or public transport.

no one has ever gone from a powerchair to a scooter.

lots have gone from scooters to powerchairs . saves you money. opens up more freedom.
07/11 jess
3

My problems are over -Transport for Wales have now BANNED 4 wheel mobility scooters. Actually they haven't done EXACTLY that - they have just imposed a turning circle maximum which NO four wheel mobility scooter legal for sale now in the UK can meet. By four wheeler I mean one in each corner, not the effectively three wheeler with two front wheels very close togerther at the front, which are just as liable to tipping as any three wheeler.
31/12/18 Charmbrights
4

In London, the DLR has 'step free' access from platform to train, I find it bizarre that the "new" CrossRail (aka Elizabeth Line) trains require ramps.
17/01/18 Timelord
1

In reply to Barrack Room Lawyer:

Write to your MP with your complaint. Get a question asked of the Minster of Transport
https://www.writetothem.com/

The Disability Discrimation Act should protect your rights
http://bit.ly/1QDIsqq

I have to say that your machine does sound a bit too big
http://bit.ly/1QDHTx2