Fireworks are a menace.  Full stop.  Loud, irritating and worthless in every respect.  Have fireworks become the new ego extension for the lower classes?  'Look how big mine is' and 'See how loud that was'...

I fully understand that children, like their sheep equivalents, like to gawk blankly at a sky full of colour, but animals do not.

Out in force with your bangers and rockets...

I also understand that throughout the winter months of November and December, the 'slower' of you will be out in force with your bangers and rockets and my small terrified dog will once again be subjected to 8 weeks of terror and discomfort.  Too scared to go outside to relieve herself, she will simply sit, and shake, and shake some more while the children go 'whoopee' at their low paid fathers pitiful attempts to impress his dysfunctional family in their council paid-for shell suits. 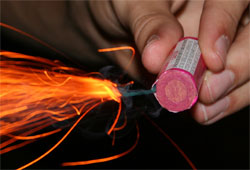 Of course, the worst offenders are the 'Summer Fireworks' that local pubs and outdoor parties think are a great incentive to bring the family into their plastic paradise.

Why, at 10.45pm do I have to sit with Sky News on full blast so that my dog doesn't have a heart attack?  Why?  So that Wayne and Sharon can take little Chelsea Beckham to see the fireworks, propped up by a can of Special Brew and let off in some disgusting franchised pub 'garden/rear car park/vandals playground/little Chelsea's place of conception'.

Go to an event, see them done properly and presented with lasers and music, fine, but not next door to me.  I'd be in favour of them being made illegal, or at the very least banned most of the year!

I wish there was an MP brave enough to tackle what has now become a national epidemic. They are now going off almost every night from October till January, and then again throughout the summer months, I for one am absolutely sick of the things. Some clowns were even letting them off on Christmas Day? They start at 6pm on New Years Eve and its a 6 hour barrage till 1am. It's all perfectly legal and there is nothing that anyone can either do about it, or complain to anyone about.
They quite obviously have no idea what they are 'celebrating', or why. They just like the cheap power and thrill that they get from lighting them. Local councils should be made to provide sound proof refuge's for those that cannot stand the noise.
29/12/16 Mainman
1

Totally agree. They should not sell any fireworks to the general public. They should only be seen at arranged events and only on bonfire night. They are a complete waste of money. I too have 2 dogs that become shivering wrecks for whole evenings and also cant hear my tv cos of the extremely loud bangs nowadays. People also seem tobe getting later at night letting them off with thise indoirs having to endure ridiculously loud bangs up to and past 11pm! Some of us would like to go to sleep instead of listening to a re enactment of the blitz!!!. For gods sake ban fireworks!!!
05/11/16 joraddy
1

Quite agree about time someone in goverment grew a pair of balls and made fireworks organised events only I bet you can guarantee the dicks that are letting them of have never bought a poppy in their life,its nov 8th 2015 still letting off fireworks most probably purchased with benefits paid by us
08/11/15 crippen
5

It's almost here, the 5th Nov, all those people playing with explosives. And I might add, their right under UK law to do so. But soon we will hear of the terrible injuries to those poor unfortunate souls that played with ordanance. There will of course be the few that got injured by no fault of their own, but the vast majority of cases will be caused by stupidity and low intelligence. But nobody cares, why should they, it's tradition and a great money maker for firework manufactures and Government taxes. Have fun everybody.
05/11/15 Next
4

I cannot agree with you more, it's Halloween today and already the anti social, inconsiderate scum have started. It will continue all the way through to New year. I have 4 dogs in total, 2 rescues which have already been badly abused by a human sub class. What else can we expect from a government who see no wrong in tearing foxes to pieces, another petition on banning fireworks will see no success I'm sure.
I've never understood eugenics up until now.
31/10/15 Chelle Pepper
1

Rockets! my favorites - Designed by spacemen, made in a gunpowder zone, automated ingredients and then let-off by a clown! What a way to do a display!
Half the firework fans can only hazard a guess at how 'airplanes' used to end up on the table! You would be right not to pay for today's rubbish it's just not dangerous enough now.
Seems Cherry-bombs M-80s are irrelevant, just so long a fuse as the firework looks fashionable, the bang doesn't matter! A bit like having crap Ronan-camdles, but hey at least we've got third-degree burms to prove it!
The expression "Damp squid" was invented decades ago, but here we are still making the fashion mistakes.
02/11/14 collar
1

New years eve is over for another year but still the morons are letting their fireworks off. Another night of my dog being terrified. But who cares? This will go on until the end of the month on this estate where these rockets are landing on cars and property and then start again in October ready for November 5. Just can't wait to move where selfish neighbours don't exist!
02/01/14 jay
-2

Absolutely agree with everything you've written. We've now had five nights of loud bangs. This time of year my elderly parents also have a miserable time of it with their distressed dog. If people have to have fireworks please keep it to November the 5th or better still visit an organised display. Have a thought for your neighbours!
09/11/13 Fred
7

When I was a child more years ago than I care to see, it used to be that even people who bought their own fireworks KEPT THEM UNTIL the 5th of November. In the same way that you don't have weeks of opening your Christmas presents before or after Dec 25th, so did people used to exercise patience in keeping the big night FOR the big night. I remember being so excited about that, even though my dad already had the box of fireworks purchased and in the garden shed.

These days, it's weeks of feeling like I'm living in a war zone. Every night there are loud blasts and my cat is fed up. You used to have to only need to make provision for frightened animals on that one night. Now, it's open season for one month. It's a bad time for animals and it also robs the event of Guy Fawkes night of anything special. Whatever happened to keeping it special by keeping it to only ONE night? People are emotionally incontinent these days, and want more and want it all the time.
03/11/13 Fed Up
3

you all need to stop being miserable and stuck up and get on with it if they want to waste money on fireworks and they are following the rules&laws ie in in their garden and before 11pm then let them.
02/11/13 krotas
-11

Chavhater, how do you decide who is a chav and who is not a chav ? Do you have detailed and precise information about other individuals whom you can justify feeling the emotion of hatred toewards ?
06/08/13 anthropologist
-6

See a big firework, there's a chav somewhere nearby. Benefits going up in smoke.
06/08/13 ChavHater
-2

Totally agree that firework sales to the public should be stopped for two main reasons.
Firstly, the Tesco morons referred to below have no respect for other people and let the fireworks off at anti-social hours.
Secondly, we are supposed to be an environmentally conscious nation - where does releasing tonnes of sulphurous smoke into the atmosphere figure in that?
Restrict their use to public displays.
04/01/13 Ping Pong
-7

Cruelty to pigeons, there's no excuse for this