I was sitting at a bus stop earlier today minding my own business and feeling pretty tired having walked a few miles to get into the town centre in the first place.  I was staring at my feet, basically half asleep when one of the pigeons hanging around the square decided to wander up to me and peck away at some crumbs that were right next to my feet.  I was quite surprised by this because pigeons, although quite tame, don't usually get that close to people.  They're used to kids that don't know any better running around after them on a Saturday morning trying to catch them and presumably pick them up.  This little fellow was determined to get his crumbs though and he was literally millimetres away from my feet.

A lot of people don't like pigeons because of the mess they make and the fact that they're swarming all over the town centre.  Well they are a fact of life and happen to be there because of the way we live, or rather because of the way some of us live.  For example the slob that can't be bothered to put a takeaway carton in the bin, the kids dropping their sweets, the office worker casually pulling the tomato out of her sandwich and just dropping it at her feet and the old man eating a sausage roll with pastry falling like confetti all around him; these people inadvertently provide pigeons with a source of food.  Animals and birds tend to hang around where food is easy to come by.  They're essentially hard-wired for this, as are we to a certain extent.  Okay, so some people dislike these creatures that are there basically at our invitation, but what gives them the right to be cruel to them? 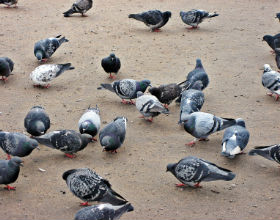 ... aiming a foot squarely at the pigeon's head

I must have spent a good five minutes observing my pigeon and to be honest, I was deriving a small amount of pleasure from this.  Having had quite a tough month so far, watching this little fellow go about his business was quite entertaining and helped distract me from my troubles.  It was around then that a girl sat down on the bench next to me and I noticed that she was eating a baguette (presumably purchased at Greggs Bakery which was very close by.  I expected a few stray crumbs to hit the ground and our celebrity pigeon to investigate and sure enough that's exactly what happened.

What I didn't expect however, was someone to chase him for having the audacity to peck at a few bits of bread.  The girl's boyfriend had been standing nearby unseen by myself, and at first I thought he had walked close by so that he could poke his head out and see if a bus was coming.  It was only when he did it a second time, this time aiming a foot squarely at the pigeon's head, did I realise the true nature of his intent.  Fortunately though, our chap being much smarter simply danced out of reach before the toe could connect leaving it's owner looking rather foolish.  Presumably this exhibition of was meant to make him look hard and impress the girl, which apparently it didn't because she muttered something distinctly uncomplimentary at him.

Why do people behave like this towards animals and birds?  I don't have a special kinship with pigeons myself, but this particular one wasn't doing anyone any harm.  Judging by the look of this guy (yes, I know..  book..  cover etc.), this wasn't the first time he had set out to hurt a lesser creature.  There he was with his shiny tracky bottoms, designer trainers and shaved head, big grin from ear to ear as if he'd just been given a new toy.  Not a nice person, but kind of typical of a certain section of society.  Anyway, they left on their bus and shortly after mine turned up.  As I got on board and sat down, it suddenly occurred to me that I'm a bit like the pigeon myself at the moment, scratching around trying to earn a living but being thwarted at every opportunity by some higher force.  A very sobering thought...

Petra, I suppose if it is acceptable with Halal then it has a chance of getting through. Personally I don't eat meat. Not for political reasons or anything else really though. I simply don't like it very much. I understand that animals are part of the food chain for many people and that's their choice, but we should try to treat them with some dignity in the process. Animal cruelty does appall me. In some respects I find it more appalling than human cruelty. At least a human can fight back but defenseless animals don't stand a chance. The recent incident in Thailand where 3000 cats were killed shocked me to the core. I'd like to get the driver of the dumper truck and make him watch while his family suffered the same fate.
05/02/15 samson
2

There are pre-slaughter stunning methods that are acceptable to most Muslim authorities; about 80% of halal slaughterhouses already stun in some way so there is no genuine religious reason why the others cannot be made, by law, to follow suit.

Laws were recently passed in Poland and Denmark to ban slaughter without pre-stunning, though our government has no intention of doing the same at the moment.

Public opinion may change their minds.

Sign the petition if you would like to register your disapproval of this practice. If you have no problem with it, then don’t sign it.
04/02/15 Petra
1

So if my understanding is right, that would outlaw Halal slaughter methods?

If so then I can already tell you what the outcome of this petition will be and it comes under the category of 'Epic Fail'.

There is absolutely no way anyone will agree to anything that could be perceived as anti muslim these days.
04/02/15 samson
1

There is a government petition about ending slaughter of food animals without pre-stunning. I personally think it does not go far enough in its wording but it's a start.

If any of you would like to sign it, and perhaps ask friends and family to do the same , here is the link.

It would be helpful if Kenny could hyperlink it. Thanks

They are such harmless, friendly little creatures, I hate to point out 'Marmalade', but I think the budgie is probably best kept for the enthusiasts who have lots of patience and thousands of hours experience. You're the guy with a hand full of bredcrumbs or whatever for little critters' consuption. A big foot strikes, you loose a few friends. If the nest gets whacked, they loose their whole family and the family home too they supply us with companionship, the feathers go up in the air.

Don't get me wrong, I understand where you're coming from, but I prefer Pigeons. You'll get the animal you deserve once we know what sort of 'nest' you live in. Then is time to choose your companion carefully.
14/09/14 collar
0

Luckily the pigeon avoided that spiteful grown-up child's foot. Animals, hardwired to search for food, hardwired to never trust a human either, it's ingrained into them that humans can be horrible. Can anyone remember the name of that film where Forrest Whitaker was some modern day samurai and kept pigeons on his roof?
28/03/14 pet
0

Collar, perhaps you might enjoy a Budgie? You can feed them cuttlefish and seeds and they make quite good companions.
27/03/14 marmalade
0

See if you can find some pretty brown and white pigeons, and spread some food-bread around you're feet, which is less than £2 - not sure about the crusts, but look at the colour - however, once you have fed the Little creatures, you're ruined for anything else.

There's also the white doves and pigeons, very friendly London and East coast birds at about the feeding sites - best to cover you're head, as you might need the hat to stop them pecking!
27/03/14 collar
0

"... or sit on your shoulder just as a parrot might"

and pooh all over your £150 cashmire jersey.

They are charming little fellows aren't they? If one has a piece of bread or even some old toast, they will come right up to you and when they get used to your face and voice they will sit on your hand and let you stroke their feathers or sit on your shoulder, just as a parrot might.
19/12/13 Franks
3

A large percentage of the people in our prisons living among us are vermin and yet we don't dispute their right to eat. Hell the taxpayers feed half of them! Personally I think the pigeons are the least of our vermin problems.
18/12/13 Alexa
-2

Inconsiderate people in a public library

Fireworks banned most of the year or made illegal