I'm sick to death of being ripped off rogue tradesmen.  For example, I had a new kitchen fitted recently and it took them three months to finish the job.  They turned up after 10am each day (if at all) and knocked off work each day before 3pm.  As if this wasn't bad enough they wanted paying up front for the full amount before they even delivered the kitchen!

There are a lot of rogue tradesmen about...

On another occasion a tiler was working in my bathroom and decided to take a stroll around the rest of the house.  As it happens my cleaning lady was in the spare room and he turned up in front of her frightening the hell out of her!  When challenged as to why he was just wandering around he couldn't give me good reason. 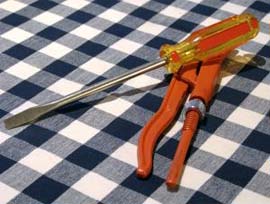 He also let himself into my house one morning and I found him standing in my kitchen when I came downstairs.  I screamed, at which point he packed up his stuff and was never seen again!

One guy wanted to charge me £1,400 to change some radiators and wanted 50% up front luckily I didn't pay him because he didn't turn up anyway.  My advice to people is don't trust anyone - even if they look nice, drive nice car etc.

There are a lot of rogue tradesmen about who will take your money and either extend the job so long you chuck them out or they don't turn up at all and run off with your hard earned money.

i really feel for you, i recently got a tradesman Scott Evans (in enfield) recommended to me by a friend, he turned up late and wanted money for the materials before he could start the job. i paid in less the half of the total cost and since then have been chasing to get it back. i doubt i would see the money again. worst thing is there is little i can do about it.
28/04/14 victim
0

I've done a bit of research on the met police beastie and apparently some victims are able to boot up in safe mode and then run something to get rid of it or use the wipe & restore method. It seems to vary from one case to another.

If you can't boot up in safe mode then you need professional help!
18/07/12 grumpyoldwoman
3

If you mean Fred E's explanation, yes I understood it. I can also understand your explanation for curing a leaky radiator. I would hope all mechanics would too. I did a short computer course back when they were as big as a house, got A levels in applied maths and physics and have helped the GOM mend a great many cars!

Does the met police trojan prevent you from booting up in safe mode?
17/07/12 grumpyoldwoman
-1

Going out to pick up the child bride now gow then of to the dominoes. Please ignore any of my posts after 12.00. Mr J smith will be influencing me haha.
17/07/12 boblet
-1

Yes GOW but did you understand the explanation? because I didn't, it was just a string of words. If you asked me what to do with a leeking car radiator I could say. Remove it from the car. pressure test it. then solder the leeks that you find. It would be factual but total rubbish to most people, including mechanics. I am not making a very good job of explaining myself am I? Suffice to say I fix things because most tradesmen I have come across cannot. that leaves the bullcrappers. I have an even lower opinion of them.
17/07/12 boblet
-5

boblet, we posted at the same time. If you get the met police trojan does it stop you from booting up in safe mode then?
17/07/12 grumpyoldwoman
2

Going back to cars; if you suddenly realise that you can't find all the gears you may well correctly surmise that your gearbox needs replacing. That doesn't necessarily mean that you can do the job yourself.

I never said that I would have the confidence to carry out Fred E's method, but I knew what he meant because it had been explained to me.

The point is SG, when the metro police trogan grabs your puter, your screen goes blank, other than fake instructions to scam money which I suspect people do otherwise why plant the trogan. It may have been on your puter for weeks. You can have as many singing & dancing discs as you like. you can also hit f8 till the cows come home. You cannot get into the register or BIOS.
17/07/12 boblet
0

boblet, you asked my opinion on something and I gave you an answer. It wasn't bu££sh!t or a "vanity" answer, it was just a quick summary of what might be the best answer to the problem (in my opinion).

Saying "I don't know" was not an option as I had a very possible solution because our computer had to be cleaned out last year and our friend explained what he had done.
17/07/12 grumpyoldwoman
2

It is not my aim to be right or wrong g.o.w. honest. I just think that a person who is in the crap with reference to their recalcitrant car or puter is best served by the responce "I do not know" rather than a bullscrap vanity answer. That is why I referred to the RTDC of an I.C.E. in your car. I know what it is, I was trying to elicit a vanity answer. Does that make me a troll? I also know what the f8 key does, although continuous tapping then safe mode with command prompts would be my choice.
Carpe Diem
17/07/12 boblet
2

I down our computers every few months and then blow a previously saved "image" back on to the hardrive, I use multiboot systems, Linux, Windows etc. so an image saves a lot of messing around.

Boblet,
1/ As I said I didn't do it myself, a friend did.
2/ Computers are all different; the method for reloading the operating system (Windows) may vary.
3/ Boot up in safe mode I looked up for you. (How you expect me to remember which button I pressed when I did it once a couple of years ago I don't know.) You switch it on and immediately press F8. This brings up the "Windows advanced options menu"; a list of options on a plain black screen. You select "safe mode" which stops anything from running automatically. Did you not get a manual with your computer?
4/ The friend who sorted ours out had the disc himself so I don't know where he got it. The other stuff was from the discs that came with it; they needed to be re-installed as well.
5/ The effect of viruses varies; having never had this particular one how would I know? I'd need to see a computer with it on! If I couldn't get rid of it myself I'd be on the phone to our friend. I only offered a suggestion, Fred E's method is drastic but works. However it might not always be necessary; depends on the virus and the computer.
17/07/12 grumpyoldwoman
-2