A fool and their money are soon parted, isn't that how the saying goes?  These days that seems to truer than ever before.  My gripe is particularly aimed at the way people hand over their hard earned cash to businesses that think they can charge whatever they like for their goods and services.

These businesses get away with this because people let them get away with it.  They pay whatever they are asked without ever stopping to ask themselves "Is this too much?".  In my experience it is those individuals that have the excess cash who are less likely to complain and I suppose you could argue if they can afford it, why should they complain?  But it's those of us who don't earn as much that pay the price.  We of course choose to go somewhere else wherever we can, however, that's not always possible and with a group of friends you'll often have a mixture of fat purses and skinny wallets.  Whilst I have no objection to those who want to pay more doing so I do despair at those who cannot meekly handing over their money without a word of protest. 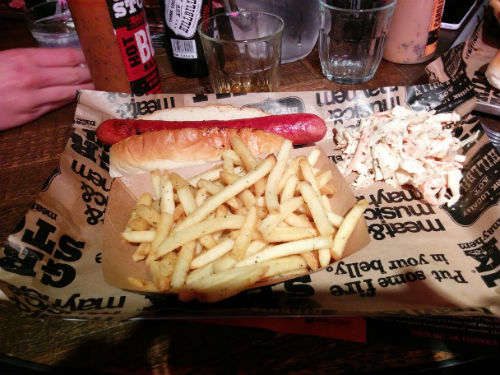 This gripe was written on the back of a "dining" experience recently at a place called Grillstock in Leicester.  I wasn't particularly impressed with the place (or their leaky toilets).  I chose the cheapest meal on the menu a hot dog with fries and coleslaw for £6.50 and had a beer priced at £3.80.  That's a 330ml bottle by the way, not a pint and if it had been it would have worked out at around £5.75!

As is so often the case these days with restaurants trying to be fancy the food didn't come on a plate.  It was on a grubby looking tray with a piece of greaseproof paper, which saves on washing up I suppose!  The chips were OK, a reasonable amount no problem there either and the coleslaw was OK although probably out of a tub.  It didn't have that homemade taste.  The hot dog was pretty underwhelming and as a package I don't think it was was particularly good value for money.  How much would I have preferred to pay?  Definitely less than a fiver.

So in summary, a meal and a small drink for £10.30.  Probably not as bad as some places, but definitely not as good as chains such as J D Wetherspoon who can do a jumbo chilli dog with plenty of fries and onion rings plus a pint of real ale for £7.09!  But what is three quid I hear you say?  Well I'd say it's three quid that would be far better in my pocket than in some business more than happy to put the squeeze on its customers.  My main point in all of this is don't be afraid to take your business elsewhere.  Speak up and let it be known if you think you deserve a better deal.  All it takes for unscrupulous businesses to thrive is for good people to shut up and say nothing!

By: Victor (the food god) Meldrew

I want real butter, not margarine.

Baguette, that means pay double for your sandwich. In France the baguettes are subsidised. Not Here!

Imperial War Museum London Saturday afternoon out with the kids. Snacks in the Cafe. Self Service. An industrial amenity designed for Deltas. Awful and grossly overpriced.

Slice of a very, very thin pre-fabricated non-descript pizza warmed up on a hotplate, topping made of mediocre materials = £4.95. Area of slice 120 sq cms. [A standard pizza for one would be of size around 800 sq cms].

Small Slice of industrially made cake = £3.95 [they get around 8 slices out of one cake].

This is how an afternoon out is spoiled. Place should be shut down.

GOW, I once heard a rumor that an out of work cook blagged his way into one of these so called upper crust restaurants and was so angry at the sight of the snob customers that he added his own special ingredients to the food. After seeing first hand what went on aboard ship when someone complained, I don't doubt this story.
31/01/16 Next
1

I'm not in the habit of watching cookery programmes, but I do usually watch Rick Stein. He has a word for such food, it starts with "b" and ends with "ocks"!
31/01/16 grumpyoldwoman
4

I can't stand those places that try to jolly up what seems to be an ordinary British home cooked meal with pretentions of being gastronomic. You know the kind of thing: fish and chips - only it's not a big piece of fish crispy battered with a mountain of chips next to it on an oval plate with home made tartar and vinegar or ketchup on the table etc. Instead it is about five thick cut still skinned fries buried and turned soggy under a small piece fish of a dubious type - described as sea caught cod - or some other rubbish, covered with equally adjectivally overblown batter (to make it sound more delicious 'real ale battered etc.) and some crushed garden peas in a small pot beside it - not proper starchy mushys - all priced at a premium because it looks pretty on some platter and the dish sounds really special on the menu to draw you in (dupe, would be more appropriate description). In effect they are just stingy portions on enormous plates and the food tastes awful, and are overpriced leaving an even nastier taste when you see how much it cost. I blame these telly chefs like Jamie Oliver for all of this pretentious nonsense. Pasta dishes are worse, huge plates with a small squiggle of spaghetti and some fancy sounding basil and tomato sauce enveloping it and buried under parmesan to make it taste of something. Normally, you need to get a kebab on the way home.
29/01/16 Grumpy xx
3

I've come across many so-called errors in my food bills. I cannot say whether they are deliberate or not, but I have suspicions some are, and if those involved are caught they can claim it was a mistake when it was a deliberate attempt to defraud.

Not just in pubs and restaurants but supermarkets etc as sometimes I have been overcharged where the advertised offer/sale price hasn't been honoured at the check-out.

Check your bills as best as you can and query anything unusual.
26/01/16 JohnRJ
1

RG, try going on holiday to Turkey. Most of the restaurants do sensible food at sensible prices. Yes there's lots of Turkish food on the menu, but they seem quite good at English favourites too! Even the Turkish food is fairly simple, and some gorgeous casseroles.

Seriously though, I do know what you mean. I do find it frustrating when going out for a meal; you look at the menu and think "well, that would be ok if they hadn't put that in it, or put that sauce on it" and so on. Mind you, Marston's pubs are quite good; especially if you go when they've got 2 for 1 on main courses.
03/01/16 grumpyoldwoman
1

Where can one go nowadays to have a square meal for a reasonable price? Cottage pie, steak and kidney, fish [cod or haddock] and chips [made with quality potatoes], rhubarb crumble pie and rice pudding. Where are the restaurants for the workers. Do pubs nowadays do home made meals for the masses? Or has the BBC promoted luxury, upper middle class chef style cooking taken over all the places one can buy nosh? Master chefs make a quality midday meal with two courses, two veggies, and sufficient protein to sustain us for the day for £5. We don't want modernist presentation style meals. We want to be fed.

We don't want 12.5% added to our bills automatically for so-called Service Charges.

We want tap water when asked for. Free!

We want menus which state the full price for a meal on the board outside restaurants.

We want weights for fish and meats declared up front on the menus.

We want the restaurant to serve ordinary people, not the bourgeoisie!