Is it just me?  How long do they think local people will stand by and watch as the food aid and relief supplies are piled up so near but so far?  Haiti is being touted as the poorest country in the western world, yet still they starve.

We still don't know how many Haitians are affected...

The disastrous earthquake rocked Haiti a week ago and we still don't know how many Haitians are affected as they are concentrating on Port-Au-Prince.  However the outlying towns were also affected so the real picture will probably only be visible much later.  As far as the actual relief is concerned the Americans have arrived and taken over, but it's looking like Katrina all over again but to my mind remarkably worse.

Meanwhile the media and all that goes with it have turned up to show us the devastation that the people of Haiti have been put through with this natural occurrence.  However, they cannot start to distribute the water, the food aid and medication that the people need quickly enough.  WHY is this the case?  When that tsunami struck a few years ago I don't recall this much confusion and chaos? 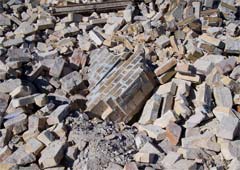 Let us not forget that we now have the DEC (Disasters Emergency Committee) and what their purpose is just eludes me completely; they're sitting their with their fancy planning, grand titles and so on, yet on the ground it seems that very little is being achieved and every day there is something new to report.

If they need more help why don't they speak to the local leaders? At this rate there will be more disaster as the locals turn on the foreigners and then each other.  Perhaps they should recall the lyrics from Bob Marley's "Dem belly full but dem hungry, a hungry mob is a angry mob"

Dont be silly, it costs money to help people and the charities are always reluctant to part with any of it, wages to pay you know.
27/09/10 pinch
-2

Living conditions in these countries mean that storing anything is impractical. Most people scratch an existence from day to day and drinking water is amongst the rarest of commodities for some of them. The concept of having even enough for each day, let alone storage for the future, is competely alien. Then there is the question of storage containers and space.

Underlying this problem is that the authorities and governments in those countries are incompetent, corrupt, and unconcerned, relying on handouts from the West time after time, and you can see the problem. They are unable and uninterested in helping themselves, and always will be while there are richer countries around to provide handouts, which is why 'aid' is a bad idea.
03/08/10 MikeP
-10

It's amazing how nature slaps humanity in the face now and then just to remind us who's boss.

As for clean drinking water. Rolls of cellophane and ice cream tubs are all that are required!
03/08/10 AOD
-39

The floods were too powerful and too sudden. Great "walls of water" washed away homes and businesses. People were lucky to escape with their lives. Bottles of water would have just been washed away too.
02/08/10 Sally
-9

Why is it only Western countries that are flocking to help Haiti? I don't see China or India helping much even though they spend a lot on nuclear weapons and space programmes
13/04/10 Nick Griff
-5

I suggested that every country in an earthquake zone should get their people to fill up a load of empty plastic pop bottles with water, and store it close by,

In a few days time some people of Chile will have to drink dirty water, as there won't be any clean supplies, the lack of drinking water there will be on the news, a simple solution.
28/02/10 Gainsborough lad.
4

First Haiti, and now Chili, the Hadron collider has just been started up, coincidence?
27/02/10 Jupiter 2.
5

I agree with what "Fairy" says, there is too much red tape, I was watching CNN about a week after it happened and a reporter asked the American military commander who was in charge at the airport if he knew that hunderds of people camped outside the airport had no food and no water and he said he was not aware of that ! so what chance did anyone else have. The Americans seemed to be more interested in poseing about in their Hummers. A reporter filmed an Israeli field hospital treating people and doing surgery and he said the Americans have not got one field hospital up and running! yet the Israelis came from the other side of the world and have their hospital up and running, he said he was ashamed to be American ! But its not just them, its other organizations too. While they count their boxes and make stupid excuses people are dying !!
13/02/10 Comentor
-9

There is no excuse for how long it is taking for the aid to reach these people. You have individuals and small groups out there getting the job done with a lot less than what the U.N. , various militaries and large aid groups have at their disposal! When they go to disperse this food they claim that the people start getting rowdy or whatever and so then take off without handing out the supplies. What a load of crap! As long as these aid workers are not in danger-and they're not because they stay on the vehicles-just throw the supplies out already! It's a chance they have to take! They claim to be afraid the people will injure each other or whatever but what is the alternative? The people will just sit there and die or turn on each other anyway-there's nothing to lose!

They can drop these people food! They can if they want to-there's no excuse why they can't! If they can drop bombs on innocent people in war, they can drop these people some food! Why are people so blind to what is going on over there! They have DONATED food and supplies sitting there and making people sign for it-tying everything up in red tape! There is no time for that foolishness-time is of the essence. Stop taking inventory and get that stuff out there! The media is already starting to lose focus on this and so many of us have short attention spans-we're missing what is going on over there. We need to put pressure on our governments, the media, these aid groups, etc. to let them know that we are watching and what they ae doing-or not doing-is totally unacceptable! Haiti needs help NOW!!!
10/02/10 Fairy
2

MikeP is always whining on about " trolls ". It seems to be incomprehensible to him that other people can hold opinions different to his own. Perhaps he suffers from super-sensitivity?
29/01/10 Mr Hicks
-1

communitarian : I don't know why you dignify the ridiculous comments that some of these idiots write by replying to them. They are simply trolls and looking for a reaction.
28/01/10 MikeP
1

I am an Aid worker and felt the absolute need to respond to some of the ignorance.
To at300 - many don't choose to live in an earthquake zone - they are born there often in extreme poverty and no other country will permit them to immigrate as they have no education etc.. poverty often dictates a persons whole life and choices. Stop being ignorant to how the poor have nothing, can often become nothing and certainly cant just pick up and move to a non earthquake zone like we can.
To comentor - There is no such policy in this world as you suggest - that the bigger countries want to stop the poorer countries being reliant and hence them being "slow" to respond. Especially when such a disaster of this magnitude hits.
To just stay calm and carry on - these people do not have different digestive systems to us! They are human beings just like YOU. The only thing that will alter their digestive system over time is extreme hunger/malnutrition that has gone on for weeks - not days, as has been the case in Haiti. They would certainly not "eat themselves to death" as you say!! Again complete ignorance.
To dobbo 996 - well done - the main reason aid is not getting through is that there is no formal government functional system, no infrastructure - roads being main one and airports damaged.
28/01/10 communitarian
0

The answer is simple. The infrastructure in Haiti, which is poor and made poorer by the earthquake, has slowed things down to a crawl.
25/01/10 dobbo996
-5