For quite a while I've been unemployed and unable to get a job.  I've had to save the pennies and restrict my spending to essentials.  This has meant shopping for some items at charity shops.  I've bought a shirt or two and some jeans and jackets over the past few years.  In the middle of tough economic times I'm sure I'm not the only one who heads for the charity shops.

However, in the last few months I've noticed that some shops (Mind and Oxfam for example) are pricing up things to ridiculous levels.  Considering a lot of things that charity shops sell are donated free, why do they insist on hiking up the prices to unreasonable levels?

Last week I saw a shirt I wanted but it was priced at £7.75.  It was a Marks and Spencer shirt and it was clearly not new.  Compare this with going into Sainsburys where they have two brand new men's shirts and a tie in a pack for £10 or £12!  Which would you go for? 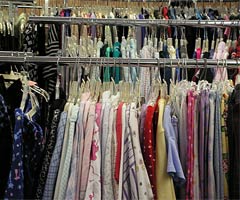 To me, some of the large UK charities are getting just a little bit greedy.  I know they serve a purpose but when they first appeared you could get a good deal.  Now it seems the main ones are out to rip you off.

I now look in the small independent charity shops that are less well known but usually have fair prices for second hand goods.

Still, I may eventually get a job, that is if I can beat the other 250 applicants to it!

If you want to donate books offer them on sharing sites for free or take them into coffee shops and pubs which have shelves where you can leave books. If you donate them for free then those people who would like to read or take those books should get them for free as well.
29/06/17 Lemsip
0

I do agree as I shop in charity shops even though I am working because when i was on jsa I couldnt justify paying £10 for one shirt when I go go to charity shops and get 3 for that price I still have that mentally.To me a shirt is a shirt regardless iof price.
Anywho I do also find some charity shops are very costly with books and clothes I worked for slavation army core which has a charity shops and we sold any item of clothing for £1-2 regardless of make etc. I went to salvation army charity shop as part of a chain and they had prices from £3-8 :O.
I know charity shops now run as business's and need to get money to pay bill etc but most people who work there for free and so only the managers wages are the issue so ton down prices I do think oxfam is the worst offender for this
20/10/14 Mr H
1

Charity shops should really change their names to The Oxfam Junk Shop or British Heart Foundation Charity Junk Shop etc. They should also slip the word profitable business in there somewhere. A suitable slogan for these should be " As long as we make a buck we couldn't give a f..k" .
30/01/14 Dickinsons no deals
16

Agreed. Women just cannot stop buying handbags, shoes and clothes - no matter how many they've already got in their wardrobes.
30/01/14 Nick
-9

It would be good if Victoria Beckham donated all her Hermes exotic leather handbags to charity so that we could all have a chance to get our teeth into a piece of real bargain lol.
29/01/14 Emma
-13

I agree that charity shops have become greedy.
Lately I have been in quite a few and the prices are high in some.
I've also noticed that there is quite a bit of junk on sale.
A few years ago you used to be able to get a bargain, but not anymore.
If you are going in looking to find things of value then you will very rarely see anything now unless you are lucky.
Anything of value never makes it to the shelves which I think is very unfair. Everyone should be able to have an equal chance of buying anything that is donated.
I was in a shop the other day when I overheard the manager saying that they had some ring in that looked valuable. She said that they got on to local jewellers who looked at it for them. I said to the woman is the ring for sale now in the shop and she said no as it was sold to that jeweller.
I then said that it wasn't very fair as it was donated and everyone who comes in the shop should be able to have a chance to buy the ring.
Instead this jeweller has no doubt made a profit.
I am not against him making a profit, but it was donated and we should be all given the same chance of profit or purchase.
In another shop in the past I heard the workers talking about how a valuable book got missed and someone came in the shop and bought it and made quite a profit.
Good on them as they bought a donated item fair and square.
29/01/14 Lucy
9

@Peewee
Childish as expected. Thankfully you spared us your usual drivel.
18/01/14 Charlie
6

I told you I would get into our head, you will just keep going because you can't help it. You will think of me as you did last night when you went to bed annoyed and also when you awoke this morning, hence why you came on here so early in the day. Lol you did the text book insult I have seen on a lot of sites where less intelligent people as yourself fire out when annoyed and incorrect. The old grammar insult is one of the oldest and most amusing. Please don't as most people get learned knowledge mixed up with actual intelligence. Knowledge is what is learned and retained, like learning a scrip for a play. Intelligence is when you can solve problems you haven't seen before, not learned from a book or teacher. Spell and grammar checker I guess you use sometimes, and I really think you need to check yours. Good luck with trying to get me out of your head and with the Asperger test. I will check back now in a week as I can do so to see what guff you write next. You however will keep checking as proved this morning with your very early post. Keep me in your thoughts, I know you will. Don't forget figures can be manipulated you silly billy.
I look forward to reading your next post right after this one as I know you will not be able to help yourself. My next post will be next Saturday should I need to reply.
So keep me in your head until then and keep checking, and I also look forward to you posting in another name soon too, can't wait.
11/01/14 Charlie
5

I volunteered for two years at oxfam at a shop and in head office, hence the figures. I'd rather quote from my knowledge than just make stuff up, you see.

I'll get checked if you promise to see someone about adult education classes. Seems you could do with learning some grammar, spelling, punctuation and verbal reasoning.

No problem, happy to be of help.
You probably can't help it, probably not your fault that you seem to spout out facts and figures that you have read all the time when someone challenges what you have read. Spouting out facts and figures you have read, obsessive actions, mmmm seems like you have adult Asperger syndrome. I would get tested if I was you, I would check against some of the other symptoms of Asperger you seem to have too, see your doctor and book with a specialist soon. Good luck @peewee, and that comes from my heart, it really does.
11/01/14 Charlie
6

Lol no you missed the point because of your average brain.
I did this action just to prove on a small scale that figures can be massaged as with reports for accounts.
11/01/14 Charlie
6