In June last year I did a skydive to raise money for a charity.  I particularly wanted to raise money for Macmillan Cancer Relief but unfortunately they do not support extreme sports, their insurance doesn't cover that.  So I decided to do it off my own back.

I phoned up my local parachute centre at Weston on the Green to request information on the courses they do.  I decided I would do the solo skydive as it was more daring than a tandem.  I also decided that I was going to pay for it myself, as it was something I had always wanted to do anyway.  That way at least all of the money I raised would go to my chosen charity.

Don't fool people into thinking that their kind sponsorships are going to charity. 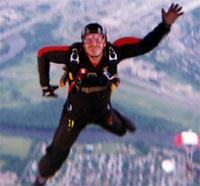 As I was walking out of my local sports centre the other day, I noticed a poster about doing a charity skydive for Mencap.  I thought that I'd love to do it again but go one better and do an Advanced Free Fall course.  And even better, I could raise money for a charity whilst doing it, so I had a look at their website.

However, I was horrified to discover that you need to raise a minimum of £530 and which only around £140 will actually go to the charity because they take the cost of the course and booking fee out of the money raised.  I have to say that I didn't actually find this information on their website.  I just did a search under Google for charity skydive's to find out.

I think that this is terrible, as people have sponsored you thinking that their money is actually going to charity when most of it actually isn't but is going towards the individual have a few minutes of thrills.

If you really want to do a skydive and want to raise money for charity, pay for it yourself.  Don't fool people into thinking that their kind sponsorships are going to charity.

Well When I done one last year I paid for it out of my funds. Yes, the prices are terribly high, but no more so than for a charming holiday abroad. What I object to is the fact that you have to be able to get double for the charity, in effect and you raise aweness with you're work on the QT. I believe that the actual flight of the aeroplane is not very good nowadays - but unfortunately as my legs are deteriorating and my body was dropping, it looked like I will have to buy a prosthetic limb... asssuming I can get one of course.
09/03/14 collar
-1

I understand everyone's views on here. I want to do a charity tandem skydive to raise money for charity. I will add as much as I can to pay for the jump but my funds are limited. The main reason I want to do a jump is because of the other thing I don't have a lot of- time. I can't spend a couple of hours each day training for an endurance event or organising a charity event as I have 3 small children. I will be able to get family to look after my kids for a few hours on one day. I will spend a lot of time gathering sponsorship with my kids in tow and help to raise much more than the 'minimum'.
09/03/14 Busy
-1

I was thinking about a charity skydive for autism. glad I read this. now I know I have to do a lot more research...
thanks for the info.
but you know what. it kinda makes me sick that "charities" take more of the money donated for themselves and all of these hidden fees, rather than giving it to the people they're supposed to. where's BBCs panorama when you need them?
27/06/11 Yazz
0

If you inform people that a proportion of their hard earned cash is funding your jump and they are happy with it,fine.The problem is when people are not informed and are misled into thinking that all of their money is going to the cause.I think morally you should pay for your skydive,like everything else in life,if u can't afford it,don't do it!!!do a 5k instead!
24/03/11 Appo
-4

I totally agree. I will be doing a sky dive for Lung cancer and will be paying for the sky dive myself so any money raised will go straight to the charity!!!
25/02/11 Sah123
-12

When I hear about a charity parachute jump I always think the annoying person who pesters you to sponsor them should be pushed out of the plane without the parachute.
22/10/10 old but still grumpy
-13

If you look through JustGiving there are many sponsored jumps but not many mention that the fee is deducted from the sponsorship money you are asked for.

Maybe it should be compulsory to show what deductions are being made?
22/10/10 Sarah
2

I think the idea is that YOU pay for the jump, the sponsors donate money for you to do it. Otherwise, the sponsors are, in effect, subsidising your hobby? One of my mates is a qualified parachute instructor, in fact he is often the "one who knows what he is doing" on tandem drops and the normally charity jumper pays the costs, then raises the cash for the good cause from sponsors

I quite like visiting the opera, so should I ask sponsors to stump up enough cash for me to go regularly?
10/10/10 Timelord
-3

As a widow on a very low income I have no funds available to donate... so I work in a charuty shop and derive great pleasure from it,( should it be unpleasant to make charitable) I'd like to do more.... a sky dive???? Hmmm hate heights, risks, etc....but if I can raise just a little bit of money for a good cause and benefit in my sense of worth does that make the cash for charity of any kess value.? Sad to say charity has to be commercial ... and sponsoring me to learn to crochet won't earn any revenue for a charity.
PS.
MY children will cover the cost for my sky dive ( haven't told them the will is in a charities favour)
15/07/10 Kathleen
-11

Overall charities make a lot of money from skydiving, however just look at the cost of doing a parachute course direct, lots people fundrise well in excess of the minimum.

Wow, this has got some bad comments. I think you've a right to whinge about the very poor charity deal your local dropzone has put together though, surely its not still running that scheme?

When I did my Charity Skydive I had to raise the amount to pay for the jump through sponsorship, and I openly told people that a portion of their money would go towards paying for the jump, with any excess sponsorship going towards the charity. This was made clear to me by my local dropzone, Skydive North West (Cark). On top of this I also had to raise an amount equal to the cost of the jump both from any excess sponsorship and any other charitable donations I received, part of which involved me performing a street collection in manchester city centre.

But despite some of the other comments, lets face it that there are many cheaper things you could do to raise money for charity. If you are serious about charity, I think skydiving is a bit of a bum deal. To be honest I did my first jump for charity as a student just to get out of paying for it myself.. Does a sponsored skydive attract more sponsorship than free or cheaper sponsored events? I don't know about that, maybe it depends on the personn. I'm considering doing the 3 peak challenge this year, I think people would give me far more cash for that as it involves a lot of effort, and a much higher percentage of the funds will go to charity.

Skydiving certainly attracts people into charitable sponsorships who otherwise wouldn't bother, so perhaps thats where its power lies as a positive thing for charities in general.
21/01/10 Frugal
-6

How would you know whether people have told their sponsors that this is how the payment works or not? Some people may want to raise a significant amount of money such as £140 for charity but may not have the money to pay the rest of the jump so as long as they do not lie to their sponsors I dont think you have any right to judge people who want to help but may not have the funds that you do.
15/11/09 a
-14

Ok, so I understand your point of view about not ALL the money is going towards the charity. But lets think about it... Yes people want to donate, but people also want to enjoy themselves. My view is that i'd rather see more people raising money for a charity by doing somthing they will enjoy, than people not enjoying doing somthing and therefore not doing it at all.
You mention in the article above that ONLY £140 goes to the charity... I think your missing the point... £140 is going to your chosen charity!!! Thats £140 more going than if you didnt do anything.
Some people (especially in todays ecomonic climate) cant just afford to do pay for a sky dive. So why not kill 2 birds with 1 stone and raise money.

Get a grip and stop moaning about people raising money for Charity. I wander if Help 4 Heroes will get annoyed with me for raising £140 for them when I do my skydive? I would guess not.
29/09/09 Daniel
-8

I have heard a representitive of a hospital suggest that over a year the costs to the NHS of "charity" sky dives, mainly minor injuries, far exceeds any money raised. This is why some charities discourage such activities.

I wonder how much of the cost is insurance, as your normal "life cover" almost certainly does not cover such activities.
25/08/09 Timelord
-12

I'd rather sponsor someone who wants to do a skydive etc not to do it, so they would be sacrificing something instead of getting others to pay for them to enjoy themselves. Have you ever wondered why people don't ask for sponsorship for them to do something useful (like doing some work for the charity they support)? Could it be because they wouldn't get any enjoyment out of that? I prefer to donate direct to any charity and get annoyed by all the requests for these 'charity sponsorship' donations.
06/07/09 usedtobegrumpy
5

People who take credit for your achievements

Should you give up your motorcycle for kids?