I have a Dell Latitude D600 laptop and recently it began to smoke (no, not twenty a day... an electrical problem!).  So I duly decided to replace the motherboard and found a suitable candidate on eBay.  Well all good things come from eBay don't they?  I was lucky enough to spot a Dell D600 laptop for spares or repair, no screen, no hard drive or memory, just a motherboard and the plastics.  Well buying things in this way can be quite risky, but at 0.99p purchase price and 15 delivery I thought I'd scored a bargain (as long as it works that is).

Well there's the thing.  The Dell D600 laptop base I' bought worked okay, but unfortunately was protected by a Bios password.  For those who don't know, unlike desktop computers you can't reset a laptop bios by removing the CMOS battery as the password is held on an eprom.  So no quick fix.  A brief chat to Dell tech support quoting my service tag enlightened me to the fact that I'd need to prove ownership before they could help me reset the master password; name, address or even a postcode would have been sufficient.  The seller of course could not provide me with any of this information and in fact his English was so poor email communication was quite torturous.

As it happens, I discovered various tools on the Internet that may be used regenerate bios passwords in the event that they are forgotten.  Unfortunately, however, my Dell D600 has a service tag that ends in the dreaded 595B which is more or less the kiss of death as far as getting into the bios myself is concerned.  I haven't yet tried the Dell Service Tools (DST) which supposedly allow the service tag to be erased/changed (presumably to use one for which I have a password - See Google).  From various forums I have visited though, I gather that they don't always work and it's questionable as to whether or not it will help me get passed the dreaded white screen with "this computer system is protected by a password authentication system".

What options are open to me now then?  I've read, again on various forums, that the Dell laptops with a 595B service tag can have the Bios passwords reset via a small procedure involving a paper clip.  It involves stripping the laptop down to the motherboard and locating the eprom then shorting out a couple of pins for a short while.  A risky procedure I hasten to add and one I will only take as a last resort. 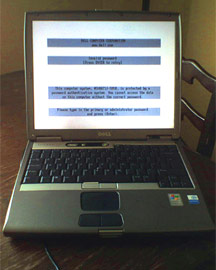 So what's the focus of this gripe?  I guess it's Dell really and the way the whole service tag/ownership thing works.  I can understand the reasoning behind it but the system is so inflexible it truly beggars belief.  Stolen laptops are an issue, but at the same time there is a lot of buying and selling that goes on quite legitimately, and in some cases details of original ownership may not be transferred.

Not everyone is diligent enough to ensure that Dell is kept up to date with names and addresses and the person buying the laptop may not know they need to tell Dell they've bought a laptop from you and give them your name and address.

Of course when they then sell that same laptop a few years down the line and don't have your details the next person definitely not have any proof of ownership.  The whole thing kind of reminds me of vehicle logbooks and the DVLA, but it doesn't work well for laptops because people don't see them in that way.

What's the solution?  Well there isn't one at the moment, at least not for me.  I've bought myself a nice little doorstop.  The guy offered to refund me (at least I think that's what he meant), but it would cost to send it back so probably not worthwhile.  The moral of this story is: Don't buy a Dell laptop (I could just leave it at that) on eBay without first checking that the person has proof of ownership or that the laptop is working and doesn't require a password.  Incidentally, once you've got your laptop you can apparently transfer ownership online.  However, as I mentioned before, it just takes one person in the chain to forget to do that and the connection to the service tag and Dell support is forever broken.

you can get rid off all your technical issues and also a master solution to unlock your bios.
Simply visit here, https://www.delltechsupportnumbers.com/
14/08/18 james watt
-1

Hi, I have the same problem with password, but I have 24LC04 circuit. I checked from datasheet signal pins are identical. Can you send paperclip method to my email timope@gmail.com ? I tried according this: http://geekphreek.com/dell-d600-password-removal/ but it didn't work for me.
07/12/14 timope
0

Folks, if you're having trouble with the 595B service tag models leave a message with you're email address, be clever so the spammers don't harvest it! I'll email the pictorial guide paper clip method to you free of charge.
29/04/12 Article Author
-15

Actually, the paper clip method works fine. It was on this site a while back but was taken down, but only after a friend of mine fixed 5 laptops with it. Perhaps email the site owner and he or she can repost the photographic guide on how to do this.
24/07/11 Liam
15

Folks, just to point out that I fixed this quickly using the paperclip method. Even though it was really easy, unfortunately can't post how or why here as it's considered hacking and cracking. I wrote a wonderful appendium to this page but it had to be taken down... sorry, but I daresay if you look on the wayback machine for this page you might see the guide.
09/06/11 Article Author
7

Are you sure you're gripe is reasonable? Your mobo failed and YOU could have had Dell fix it, I'm presuming it's no longer under warranty and the repair would have been expensive so YOU opted to go cheap and take a solution YOU admit is fraught with risks, up to and including buying stolen equipment. YOU admit this but blame DELL because they are trying to protect their customers in a way that's inconveniencing you based upon the decisions that YOU've made. Dell's protection efforts would need to be inflexible to be of any value, what good would they be if they're so flexible as to reset passwords on potentially stolen, stripped, and re-sold laptops? The second point is that you don't have to be the original owner of the computer to transfer ownership because Dell knows that people and companies sell equipment without telling Dell. Just put "unknown" in the name fields of the current owner and your information in the new owner section. I don't work for Dell so I'm a little sketchy on the details but I believe that Dell will attempt to contact the registered owner, verify they don't have it anymore, and then transfer it to you even if you are several owners removed from the registered owner. Given that they may wait a reasonable amount of time for a response from the registered owner, the process may take some time. I believe that they will eventually transfer it if they can't contact the registered owner, but I'm not sure. I've only done this a few times, I don't know all the ways the process can fail or how it can be fixed. You mentioned that the tool to change the service tag in BIOS doesn't always work, like everything else, BIOS will go thru updates over time that may require a newer tool to work.
13/05/11 Duane
-68

Can you please send me pics of the location of the I need to short for the dell d620 Please. I can not fine a chip that has 24C02 on my motherboard.Can you please give me details and great picture of this please.
30/04/10 King-Tech
0

Defective trumpet bought on eBay from a power seller