I found the site of a power seller's music store on eBay which had excellent feedback, or at least it did at the time of writing.  I was interested, so I asked some experienced eBayer's to check them out and they gave me the thumbs up to go ahead and order with them.

To cut a very long story short, they sent me two Trumpets at different times with the blue lacquer coat inside the valve chambers.  They also claimed the keys were mother of pearl, which they were not!  My gripe is really with eBay though I think, and what I am trying to let the public know is that eBay does not properly policing it's stores in my opinion. eBay claims to be a just a neutral broker, yet it collects fee's from a "power seller" who is sending out defective merchandise, mostly to beginning music students and their parents who don't know any better! 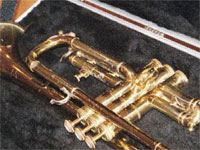 This is a hopeless situation to begin with and one that needs to be addressed.  I have of course informed eBay that this is happening and I have the trumpet in question, plus the relevant email exchanges, which clearly provide proof.  eBay however are standing firm in their decision not get involved.  Absolutely ridiculous.

I consider eBay a co-conspirator with the store in question as they now know exactly what is happening and continue to collect revenue off the sales.  The money issue on the Trumpet isn't a big deal, but eBay allowing this to stil go on is in my opinion.

I also baught a camera from Clearance Bargains, a branch of Argos on ebay.
I only used it three times successfully and on the fourth occasion it just showed a blanc screen,
not being a big camera user it was mostly stored away in my wordrobe for months on end, I only baught it to record my newborn fifth grandchilds visit from scotland, so by the time I got it out on the fourth occasion, it was just outside of the twelve month warranty they give, however as I had so little use from it I told them I wished to claim a repair/refund or replacement under the sale of goods act 1979 as it clearly was a manufacturers component defect and should have lasted longer than it did, ( the camcorder had not suffered any dammage in use) , so they asked me to return it for examination. This I did very securely packed and protected.
They returned it to me smashed and said that it had arrived in that condition, the box showed signs of compresion, the screen was smashed, there was dammage to the caseing behind the cd door as though someone had tried to open it with a screwdriver, ( what rubish it was in perfect condition when I posted it to them) and why would they signe for a dammaged parcel.
When I got it back there were no signs of impact to the outer surfaces of it, just the dammage they discribed, well it sertainly isn't a manufacturing defect now, is it Clearance Bargains?.
Iv'e learnt my lesson, I will never again purchase from power sellers on ebay.

thanks for letting me bend your ears, I feel a little better for shareing this and hope it serves as a warning to others.
01/08/09 Budgie
3

Meg Whitman ex CEO of Ebay wants to run for California Governor.
She won't get my vote!
10/03/09 Brian
3

In all this always pay through Paypal and use a Credit Card.
If the goods are defective raise a Dispute with Paypal, this Freezes the sellers Account. Raise the Complaint with your Credit Card Company [Even a PAYG] credit Card.

I bought a new camera from Power Seller clearancebargains-uk, clearance outlet for Argos, now with 82,000 feedback. The camera went wrong and I returned it under their 12 month returns policy. That's the last I saw of my camera, letters sent by recorded delivery or standard post are ignored, emails are unanswered, the 'contact' telephone number just rings. At first I thought Ebay cared but complain enough times and you get back to the beginning of their standard 'trust and safety is our priority' emails. I'm afraid if buyers loose faith in Ebay and it's Power Sellers, that will be the end of Ebay. The lesson, rely upon the manufacturers warranty and don't buy anything on Ebay unless you are prepared to lose your money.
27/09/08 Nudger
-10

It seems that so many buyers are not satisfied with ebay's customer services.
25/09/08 Google
-2

Once I sent negative feedback to a Power Seller which was swamped by good feedback from others. Their policy was apparently to sell 100s of items a week and if 1 in 100, say, caused them problems from customers they could completely ignore these and still achieve 99% positive feedback. As they sold so many items my negative comments would soon be
pages and pages backwards from the latest feedback.

I think the following extract from the terms of the promotion of 7/8/08 sums up ebay's
attitude to customer complaints:
quote:
"General terms
The decision of eBay regarding any aspect of this promotion is final and no correspondence will be entered into."
end quote

I refer to the 'no correspondence will be entered into' part.

I realise that on this occassion they are referring to their special promotion, but I have found that the 'no correspondence will be entered into' also applies in other circumstances, eg if you query their invoices and ask them why they are sending invoices for amounts which have already been paid days before.

On another occassion I had a dispute with them about an amount they took from a credit card for commission. I tried to contact them but just received automated replies and invoives.

Once I sent them a cheque for commission which was around £200 and asked for a receipt or acknowledgement in the letter but received nothing.

I think they do not realise the value of customer service. For every pound they receive from their sellers, they will allocate some pence to running costs such as salaries to run the site, some on profits, some on advertising etc etc but I would be interested to know how many pence is allocated to replying to customer emails. I would be surprised if it was more than one penny.
05/08/08 Stephen
-7

I don't know what you friend did to "check out" the music company, but it obviously wasn't sufficient. eBay has community forums but, as I don't visit them, I can't say if they allow specific complaints being aired about specific sellers; my guess is they don't because that would be bad publicity. eBay is a strange animal...most companies that act as middlemen for a group of sellers (such as Amazon.com, ABEBooks.com...both companies I deal with as I sell used books online) are ALL about protecting their CUSTOMERS. eBay seems to be all about protecting their sellers.
22/07/08 TickyT
-1

As an occasional buyer and a seller on eBay...but nowhere near being a Power Seller...I have to say that the best rule of thumb is "caveat emptor." With eBay's new rules of sellers no longer being ALLOWED to leave negative feedback for buyers, the playing field has NOT been leveled. I no longer leave FB for customers until I get it from them and I usually leave well-tempered, moderate FB for sellers. In spite of all their rules, regulations, and rhetoric, was eBay EVER really interested in "policing" their site? The recent court ruling in their favor against Tiffany's clearly shows that eBay can't legally be held accountable for pretty much anything. And how CAN they police their site...even if they wanted to...really, when it is so very huge? I'm wary of buying from the really big companies and Power Sellers, preferring to buy from individuals or very small companies who usually DO care about their customers. If I were to buy something of great value, I would insist on not only on shipping insurance but also delivery confirmation. If the seller refused, I'd take my business elsewhere.
22/07/08 TickyT
36

I was overtaken by the ebay bug when I first got a computer but quickly realised that I only got good feedback when the seller got it from me.Any problems like inadequate packing or taking ages to send an item resulted in offensive emails or blocking future bids.I was also a bit scared that these sellers that were so rude had my address.I always paid promptly and that is the thanks I got.I am no longer a member of ebay.
30/01/08 jewels12
-9

I too purchased an instrument from KK Music Store off of Ebay. When I received the violin in the mail it looked great but it wouldn't play. I called the toll free number they talk about only to get the answering machine where I left a message but was never called back. I took it over to a friends dad who works for a big music company in Texas and he said that it was basically a piece of junk. I left bad feedback so in return they left me bad feedback and their reasoning was for giving them bad feedback and not calling them which I did. Don't deal with KK Music if your thinking about purchasing an instrument.
11/07/07 Patrick
0

I have had dealings with ebay and there power sellers and I would honestly say they are as bad as each other.The one common facter always remains is the honest shopper is going to be ripped of by one or the other.Trust me when I say ebay will become a thing of the past if they carry on in this way
20/01/07 geoff
0

Picture this: You are the buyer and you just won a bid on something on ebay. You fulfil your side of the transaction very quick by making sure that you pay within 5 days (or you will be reported to ebay…blah).
Have you ever noticed that the seller holds his comment about your side of the trade for ransom until you leave the seller a satisfactory comment?
09/12/06 eBye'er
1

If KK Music Store has ripped you off I suggest you make sure all negative feedback from them is responded to by you under: Buyers, Sellers & Left for others sections. Many Buyers don't respond to the negative feedback and then the Seller's lies go unchallenged.
09/11/06 Brian
9

KK Music Store is a rip off. Inferior product. Will not work with you. Avoid buying from them at all costs!
08/11/06 Tracy Bacile
-8

Heather, Others have had problems w/ the Saxes check out the feedback. If its somewhat playable keep it. If you send it back you are stuck with paying their over priced shipping, handling and probably a hefty restocking fee not to mention your time and cost to send it back. Also they could say you abused it & not refund any of your money. If you don't want to keep it try getting your credit card company involved. Good Luck
31/10/06 Brian
-8

Dislike braggarts, people who toot their own horn

Free P&P on eBay won't be good for sellers