Love or hate Christmas (and personally, I hate it) it is almost impossible to escape the deluge of festive food at this time of year.  The supermarket shelves are stuffed full of goodies and comfort food so that even if you don't do Christmas you can't help putting a few nice treats into your basket.

My personal favourite is mince pies.  Okay, I admit it, I'm a sucker for a mince pie and will generally never refuse one when offered and to me it's one of the few benefits of the season to be jolly.  Hmmm... That's a laugh - season to be jolly indeed.  There's nothing jolly about braving the shops at this time of year with aisles rammed full of idiots stuffing their baskets full of any old sparkly tat they can lay their hands on.  You get the message that I hate Christmas, right? 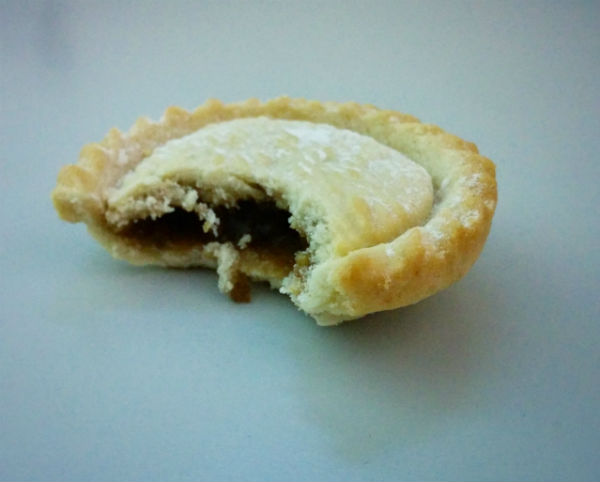 OK, back to the mince pies that I love.  I hate getting ripped off and it really p*sses me off when I buy a product that bears no resemblance to the picture that advertises it.  I'll refer back to the steak pie with large chunks of meat gripe!

Mince pies are a traditional rip-off in my opinion unless you get off your backside and make them yourself.  They're nothing but a dollop of pastry with the smallest amount of mincemeat filling you can possibly imagine.  The one in the photo for example was one that came with my work Christmas dinner. As it happens, it was a free dinner so you could say that I have no cause to complain. One of my colleagues the day before had one that was even poorer in terms of filling than the one in the picture.

It's like everything else to do with Christmas, it's just cheap crap churned out in the name of commercial greed. You've got to have mince pies, you've got to have crackers and turkey, and load up with more food and booze than is really good for you. It's what Christmas is about - apart from the spoiled materialistic little gits that we call children. Oh yes, that's what Christmas is about - them, but that's another gripe!

I just want some filling in my mince pies, is that too much to ask for? I don't think it's even the most expensive ingredient of the pie either. I think it was around £1.20 or something for a jar in Aldi and you could probably make a dozen decent mince pies with it.

Christmas office parties and work do - a nightmare