Well the ones that actually take place in the office definitely do, because for one thing you donâ€™t get a chance to escape the boring office environment.

But all Christmas work parties wherever they are held can feel like nothing more than an extension to a day at the office.  Thereâ€™s nothing worse than being sat at a table next to Bob the project manager, who doesnâ€™t exactly know how to let loose and have fun at the best of times. Heâ€™s the one person you DO NOT forward jokes on to. Instead of having fun, letting whatâ€™s left of his hair down and maybe getting a bit merry; he decides instead to bore you half to death with shop talk.  We could have just stayed at the office and had that; at least I would still be getting paid to listen to all that nonsense.

Talking of cash, if youâ€™re lucky the company might stump up for the Christmas meal, that at least goes some way to compensate for the fact that you have to spend an evening away from your friends and family to talk shop with Bob.  It can get expensive at this time of year, and sometimes there will be more than one of these events to go to.  I once worked for a charity and as youâ€™d expect the employees forked out for their own Christmas meal.  You should have seen the chaos that ensued when it was time to pay the bill. Still, at least they were a friendly bunch so it wasnâ€™t all that bad. 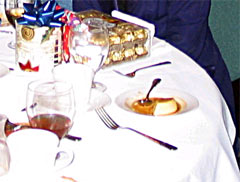 Another thing about the Christmas work do, if you go to a restaurant or other venue, theyâ€™re either held at some obscure place out in the middle of nowhere, or at some really expensive joint.  What on earth is that all about? Canâ€™t we just go for some centrally located venue that is both convenient and affordable for everyone in the department?  After all, weâ€™re not all on a big executive salary and some of us might just require a few sherbets to make it through the evening.

Iâ€™ve never really been to a â€˜wild office partyâ€™, the kind that you hear about in the gossip columns. To me the Christmas bash has always been a bit of a chore and one I could quite happily live without.  Itâ€™s not that Iâ€™m not sociable; itâ€™s just that I would generally choose a different crowd to hang out and spend my time with.  Time for me is very valuable.  There are a few exceptions and Iâ€™ve made some really good and lasting friends through work, these people I still regularly go out and socialize with.

The office Christmas party is to me, a very fake social engagement. But then again, as I said maybe I havenâ€™t been to the right â€˜office partyâ€™.

I won't go because I don't want to and it's none of anyone's business why I'm not going or how I'm spending my time off. If you're not paying me you don't get to tell me what to do.
20/03 Robin
0

If you're not socialising with your colleagues, either on an unofficial one to one basis, having a drink together after work on Fridays or the company has a social club, then what are you doing socialising with them on one night in December. You haven't bonded with each other so are forced to play charades. There's a tight line to tread. Do pretend to enjoy yourselves but don't enjoy yourselves too much. When out with friends in December having a drink I can spot the office parties and really feel for those people.
20/03/17 Lemsip
1

I don't go because they're boring and you're stuck with "disposable acquaintances" I.e you only know them because you work with them, as soon as you leave you drop them like a hot potato and never speak to them again. It's not worth my time being wasted to socialise with people I only know through circumstance. I'd rather stay in with my Mrs and a few beers and chill out
16/12/16 Rasher
0

I don't go to Christmas parties anymore. I did when I was younger and there was always some kind of fall out in the new year as a result of what went on at the party. It never directly involved me but there was always an undercurrent owing to the shenanigans resulting from the excessive consumption of alcohol. You often only need to be in close proximity to the incident to be considered 'involved'.
These days I politely decline owing to prior commitments and go out for a meal with the wife instead.
21/10/14 Samson (Delilah's too busy to post)
2

I started at a new job in august, i love my job but I tend to keep to myself and just get on with it. I have been invited to a meal out for x-mas but not going to go as everyone will chat and I will be left in silence I am a chatty person but I find it hard to chat with people I work with because nothing in common.
21/10/14 ??
1

Ive only been to one christmas gathering and it was simply getting pissed at a local pub. singing along to jukebox as well.
The management(its a large uk wide building company) laid on hot chicken and side dishes to eat with hands and all the booze we could drink at a local pub.
Some of us got coked up as well and crahed out at my mate's place just up the road and drank some more.
Good party all round.
The following year they went to Lingfield races but sadly i was no longer there.
14/06/13 ahforfoulkessake
1

I realise this is not a proper gripe but christmas was a most fertile time for me when I worked in factories. The married women became promiscuous, I dont know what it was but if you did not take a promiscuous married woman home in the Cortina on Cristmas Eve you did have a gripe so yes it is a gripe, I want a job in a factory.
05/01/11 boblet
2

Damn the PC brigade for ruining Christmas office parties and turning them into their own retarded,PC version of "fun".Bring out the halal meat,censor carols and outlaw tinsel{!}
23/12/10 DSG
-14

My office does not celebrate Xmas at all. We do not have bonuses or parties. Our employers are heathens. We work for Scrooge Inc.

If Xmas cards are sent, they are sent as commercial adverts to customers.
23/12/10 Downtrodden Employee
-12

I think it is important to have your partners invited. They should be included for putting up with all the putting up with the demands of work and its affect on a relationship. The fact that they never see each other during the day and most likely work long hours and/or weekends.
Yes, partners should be rewarded too by just being invited to the christmas dinner. They should be together on a table where they will get on with close work colleagues and away from all the b*tchy secretaries.
23/12/10 Take less from people
-15

reason for the season

Spending time away from your family is hard enough.But having so called christmas parties to please your co workers and boss is beyond belief.Are we ever going to grow up.Its a season to worship our lord,not to please others with gifts when are we ever going to understand that.Remember if you need a party go to a club.Otherwise work is work and play is play.
23/12/10 reason for the season
1

"That was fortunate, at least you had something in common."

"Depends what your workplace is like. Where I work, most people are nice and the fact that we all get together once a year is a laugh.

However, my previous jobs, I would avoid the Office party because the people I worked with were awful. So I could see no reason to spend my time with them after work in their awful company."

Besides I'd drink to much to make it intresting and end up giving my team leader a mouthful then get blasted for it afterwards. Everyones pretty excited over our works party but then again I do work with a load of brown nosed sheep so it's expected I suppose. Also this secret Santa doo daah? Pphhhffft count me out thanks! And stop coming to me for birthday collections for people I don't even know or like.
17/11/10 Got a life
-2

Funny how my company recently announced raking in six hundred thousand in profits since Easter but still expect us to pay £32 to attend the Christmas party?? We also have to pay an additional £21 if we want our partners to attend. Never been on a works do and never will as I have a life.
17/11/10 Got a life
3

Idiots on computer chairs, watch where you go!