Happy holidays?  What is all this politically correct nonsense about and has everybody gone mad?  I'm not a Christian and I don't believe in God, but I think it's absolutely ridiculous the lengths that some people go to in order not upset the minorities (or are they heading towards the majority now?).

cut out this politically correct nonsense and wish each other a Merry Christmas...

Obviously the phrase "Happy Holidays" instead of "Merry Christmas" is more popular in the US than it is in the UK at the moment, but it's only a matter of time before our traditions and values are eroded to the point that they are no longer recognisable.  If you want another example consider that fiasco of the Hot Cross Bun ban a few years ago! 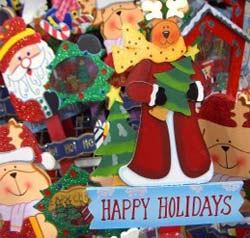 I'll be the first to admit that I find Christmas a bit much, so much so that I deliberately try to avoid the shops at this time of year.  I get fed up with the endless Christmas songs on the radio and the street that was once normal now looks like Blackpool promenade during the trades fortnight!  My gripe is more with the PC brigrade this time though.  I think that Christmas should remain as it is, it's for the kids after all and we shouldn't be pandering to the whims of those who object for religious reasons.

Whilst we are on the subject of Christmas and political correctness gone mad.  Who on earth is the idiot at Radio One who has suddenly decided that song by the Pogues, "Fairytale of New York" is offensive?  Are they having a laugh?  Faggots are also those meaty things that come in a rich gravy that you can buy in the supermarket.  It's just another example of this complete and utter madness!

Come on folks, cut out this politically correct nonsense and wish each other a Merry Christmas, not Happy Holidays!

Merry Christmas all (including you Kenny)!
24/12/12 grumpyoldwoman
0

Stop being stupid you lot! Chrismas is a non event. Just wish for it to be over as soon as poss so you can get back to work and earn more lovely money, money,money. Money and GREED is the new God.
23/12/10 darkman
-9

I didn't mean to justify ALL Muslims. I just know a few who think they have a right to dictate to us how we should live our lives and accept their faith as the one true religion!
15/11/10 DSG
-3

Council officers in made up jobs who have nothing better to do may get worked up about this but I have never met a Muslim who cares. All the Muslims I know wish me a Happy Christmas and my muslim neighbour gives me a Christmas card every year.

Normal people just get on with life and have more important things to worry about, such as whether or not they are going to have a job next year and can they afford to heat their homes AND eat.
14/11/10 Sally
31

Nowadays,the authorities pander to the needs of Muslims,in fear of "offending" them!
14/11/10 DSG
3

Fairytale of New York is offensive to anyone with a taste in music.
29/10/10 Fatgirl
0

Last night we had a visitation from the Hunchback of Notre Dame, Quasimodo himself. He managed to negotiate the chimney stack despite the bunch of pressies which he carried. Esmeralda made sure he was suitably dressed in red so as not to show up the soot. Unfortunately he forgot to pay for the parking of his sleigh outside, and received a PCN to add to the millions which he has already accumulated last night.
25/12/08 Crass Mass
-12

I really hate this Happy Holidays BS. Yet another prime example of garbage we have to endure that stems from across the pond. It's Merry Christmas you bunch of morons!
24/12/08 Sod off
-4

Sadly the birth of christas celebrated by christians irrespective of pagan beliefs has been hijacked byby the modern Idol of money and greed. most kids are just like they always were at heart with simple things until the turmoil of tennage hormones combines with themarketing world pursuasive in its object ive to have us believe we need what we do not
in business I saw enough of marketing and ad agencies to know thata good 75% of marketing is legalised lyingbut then no matter whether you have religion or not you can be tainted by the rubbish they come out with sadly those at the most impressionable age scream loudest if these false dreams are not pandared toot he old adage kiss keep it simple stupid could well be employedduring the festive season be it divali hannuka christmas or ancient pagan ritual live and let live happy whatever to you and a peaceful new year
11/12/08 NOGS
2

A reductive fallacy at work here, and a raw reification of the content of the Christian mythology. Gawd! If only we can all just set aside one day a year for some breath of existential TM, let's bury the hatchet in the hallowed name of Humanism.

Besides, why deny the little angels in our home the delight of a simple fantasy? Even I succumb to the it, and I'm not a totally nice and agreeable guy. If this be my bromide, I'm all for it. Merry Christmas nonetheless, Bud.
30/11/08 Sam, the Tiger
3

Nikki is right. The kindred spirit of the Season about to descend upon us is transcendental Grinches begone and let also the warm glow of the fireside warm our hearts and uplift our spirits. I love it, that warmth kindled by the bibbing of Celtic Crossing and Jinro. Kahlua, Tia Maria?

Christmas office parties and work do - a nightmare