So size isn't everything?  Well it is when it comes to pedestrians.  As a pedestrian, I've realised recently that I just don't count.  So many times I've been forced off the pavement and on to the road by people who insist on parking on the pavement.

Worse still are those who park there and then suddenly decided to drive off onto the road again without giving any signal at all.  Scary for the poor pedestrian who is trying to sidle past between the car and the wall.  Sometimes it's necessary to resort to limbo dancing to get under the wing mirrors and what do you do if the passenger decides to open their door onto the pavement without looking?

teenagers who block the entire pavement ...

Then there's the gangs of teenagers who block the entire pavement and force you into the road.  I stood my ground the other day and refused to be pushed off and I got a sarcastic 'Oh, was I in your way?' as I negotiated my way past them.  One their own this probably wouldn't happen, but when there's a big gang of them they think they're invincible.  Perhaps it's the way they were brought up (that's another gripe). 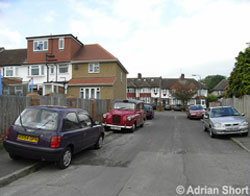 Then it's off to the supermarket where someone with a basket is invariably bullied by those with a trolley, the bigger the better for some, it seems.  They don't seem to even see you, just knock you out of the way as they barge down the aisle.  Again, it's all down to size and if they're bigger than you then you just don't matter.

I choose to walk to save money and it's good for the environment.  However, the way I'm constantly pushed and shoved around as though I were invisible is making me think twice.  I'm often tempted to buy one of those huge, petrol-guzzling four door Landrover monstrosities and then I can be the bully for a change!

"I'm often tempted to buy one of those huge, petrol-guzzling four door Landrover monstrosities and then I can be the bully for a change!" - That's what the drivers buy them for, to bully other road users. The majority wouldn't dream of real off-road driving, it would get their car muddy. The average 4WD is only used off-road in the sense that supermarket car-parks and pavements are off-road.
18/09/15 Freewheeler
-1

So what,you expect teenagers to move out of YOUR way,when you can simply go AROUND? Oh,and before you get on your high horse and demand that teenagers give you respect as if you were a king,I have one more thing to say. I'm 12 years old,and it makes me B****Y FURIOUS that you can just demand respect at the drop of a hat,and not give any back!
13/11/10 DSG
-19

Generalist -"I have no axe to grind" Yes, you do have an axe to grind. You are anti motorist and have that typical cyclist's narrow minded arrogance that assumes there is something wrong with someone who is happy to walk or use public transport.

You also forget the one statistic that cycling organisations forget to tell you. People who cycle everywhere instead of walking have an increased risk of osteoporosis! Your bones are getting weaker because cycling is not weight bearing.
13/09/10 anon
10

Paula pedestrian,
You'd probably be better-off as a cyclist. You'll still get bullied by motorists especially the 4x4s, vans and lorries but the risks of cycling are lower than that of being a pedestrian. You'll get to your destination quicker, but use less energy than walking. Typically the same person can ride two to three times as far as they can walk, but get there in a fraction of the time. Cycling is ~ ten times more likely to extend your life than shorten it. Should you decide to start cycling, I strongly recommend joining the local cycling group who will give you handy tips on road safety.

Also read Cyclecraft by John Franklin, it's the official 'manual' of Bikeability, the National Cycle Training Standard. Full of common-sense advice about road safety that isn't common, recommend it to any cyclists you know. I have no axe to grind, I'm just a fan of that book.

All the while those in cars are getting less healthy as they sit in their fume filled coffins.
13/09/10 Generalist
-9

get yer bloody car off the bloody pavement! i'm fed up of weaving between cars parked on the pavement because of some blooy-minded motorist!
15/06/10 jj
-14

Mr. Not So Ignorant

Go and complain to your council instead of just giping about it online
12/03/10 Mr. Not So Ignorant
-9

I really disagree with you, Jostled Teen. Firstly, the photo accompanying the gripe is a stock photo - where I live, the roads are really narrow and you can barely get two people on the pavement at once!

Next, I think a lot of people are just downright inconsiderate. This afternoon, for example, I was walking back with some shopping and my way was blocked by a 4 x 4 car, parked half on the pavement, half on the road, outside a fish and chip shop. The owner of the car was sat inside, eating her dinner. The problem was, she hadn't spotted a large litter bin in front of her car. This meant that pedestrians were hardly able to squeeze between the wall, the litter bin and the front of the car.

I saw a couple of people have a go, banging their Christmas shopping against the front of the car. Others had to plunge into a busy road to get round. Some waited patiently to cross to the other side. I did try and squeeze through but was worried that, as the engine was still running, the car might shoot forward and hit me.

As for teenagers, I'm really polite, I do ask nicely. But there is a certain kind of teenager that blocks the pavement just for fun, to show off to his mates. Don't you ever read the newspapers - people HAVE got knifed for challenging them.

So I disagree with all you wrote, basically.

Sometimes people just have to park on the pavement, for example in the picture chosen to accompany this post. If those cars had all parked fully on the road there would be no driving space. About the "gangs of teenagers", have you tried saying "Excuse me please" ? my guess is most people havent they just push by the teenagers and the mutter how ignorant they are because they didnt clear a path and bow before the person wanting to pass. Of course you dont need to say excuse me to teenagers do you? as you are bigger and older. As for people sporting a trolley bullying those with a basket, the same people bully others with a trolley it's just a supermarket sweep situation.
12/12/09 Jostled Teen
-11

Joke - I disagree that people only park on the pavement when they have to. It's more like, when it suits them. Just as long as THEY don't have to walk very far. Yes, sometimes you can squeeze between the car and the wall but not if you've got a pushchair. Sometimes, there's no room and you end up walking in the road. You shouldn't have to.

There are some gangs of teenagers that I wouldn't dare go through the middle of. Likely to get knifed. Good luck to you!
09/12/09 Paula pedestrian
-11

And if you are wheelchair bound grunt and be heard. Suffer not the indignation you might cause. Count yourself lucky that you are not riding in a Robin Reliant. Park on the pavement and get away with it. I am 5 foot 2 but far bigger in heart than any of these pinheads over 2 metres high.

Bigness is relative to the purpose in hand. A screw too big for the hole won't go in. Remember the bigger you are the more expensive your coffin is going to be. And people who live in big houses have higher heating bills and need to eat more food and generate larger volumes of waste matter.
08/12/09 Nothing Really Matters
-17

most people only park on the side walk when they have to... as in if I parked on the road there would be no room for another car to go around and I would bloke the road.

i dont see anything wrong with parking abit on the path, people want to park outside there house not a 5 min walk down the road so they might aswel park on the pavement.

i am a walker and a driver, its not that hard to edge around a car?! or go sideways for a second.

gangs of teenagers - yes they are annoying, but I dont move out the way for them - I just go through them

And on the subject of space - just got some money from the cash point, stepped back and went smack into a pushchair. The woman had stopped it right behind me as I was getting my cash. I nearly fell over it. Why not park it at the side? People have to move away from the cashpoint after they've finished. What are we supposed to do - beam ourselves up?
07/11/09 NickyB
3