Quite frankly local councils take the biscuit but apparently not the rubbish these days.  They just haven't got a clue and to be honest this fortnightly rubbish collection idea is just crazy.  I've just read an article in the news about a guy who now has a criminal record - for overfilling his wheelie bin by four inches believe it or not!

What on earth are they playing at?  Apparently Copeland Council sent an employee out there to take a photograph of the offending bin, then a couple of days later officers with stab vests turned up to read this poor guy his rights and issue him with an on the spot fine.

Is it just me, or has the whole world gone barking mad?  Surely local councils can find a better way to spend their bloated tax coffers than hunting down residents and making criminals out of them. 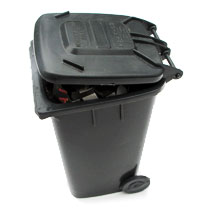 Apparently in Nottingham it's now a crime to leave your bin out on the street too long after the rubbish has been collected.  More fines, more council tax wasted.  If they collected the flipping rubbish every week instead of just once a fortnight then we wouldn't be in this mess in the first place!  Maybe that was the plan all along.  Let's save money by collecting less frequently, then we'll sting them with fines.  That'll stitch them up nicely thank you very much. Grrrrr...

Well Mr Corkhill of Whitehaven, Cumbria; here's a suggestion for you.  Why don't you fill up your bin to the prescribed level and put the remaining rubbish into a large wheel barrow.  Then once a fortnight take it up and dump it right on the doorstep of your local council offices.  Let's see then if the can place hand on heart and say that fortnightly collections are such a good idea.

I see you're point but I can highly recommend emptying any bin any day off the week in the UK these days watching the growing numbers of dustman operatives stressed out, angry, throwing the wheeled receptacles about, abusing each other. My wheeled receptacle takes a lot off garbage I wonder why It's at the side of the house when I leave it out, and under the window when I get home. I have been wagging my finger at them like mad( but they don't seem to notice). If I acted like some of the house inhabitants I see every day they would have me put off of their calling list. By the way, please use the service brooms to clean the sidewalks our drives etc.. the houses are definately our territories, Thankyou.
22/03/14 collar
0

What do you expect the council to do about this i have a next door neighbour who never takes his bins in their left on the pavement from one week to the next he has a four by four vehicle up on ramps and a large trailer witch has been their for over three months not insured not rood taxed and the council and the police do nothing all but if you put your bin out on the wrong day they ll fine you ? its a disgrace .
16/02/14 racehorses
0

As the saying goes and I think I read it here recently, if you put your bin out on the correct evening, you'll get it emptied properly. No disrespect meant to the author of this page but binmen aren't paid much and particularly council bin men. One could almost appreciate why they wouldn't really care if the wheelie bin was in the wrong place. I say - ALMOST, because under the circumstances its quite unforgivable
15/02/14 collar
0

I think fines for leaving bins out are a bit much but there are times when the wheelie bins can obstruct the pavement. I've noticed schoolkids getting off the bus, walking along the side of it and then having to squeeze between a wheelie bin left on the pavement and the side of the bus. Some of the kids carry large backpacks and could be injured if the bus moved off and crushed them.
15/02/14 On the other hand....
0

Put your rubbish on your own bin!

Right, that's it - I am about to have serious ructions with my neighbour over our wheelie bins. He never puts his out and we have a fortnightly collection here. That means that his rubbish is just rotting for up to a month. OK, maybe that's his problem but not when I can smell it from my garden. It also attracts rats and flies.

To be honest though, the thing that really annoys me is when he uses MY bin to dump his family's waste. There are 7 of them all together, at home all day and I notice that when I get back in the evening, the lid of my wheelie bin is sticking up. He can't be bothered to put his own bin out so when it gets full, he just uses mine!

This now means that I've got nowhere to put my rubbish and I will probably get fined by the council for having the lid sticking up. I can't stay at home all day, monitoring my wheelie bin, can I? I don't fancy talking to him about this because he's a massive slob. Any suggestions before I totally lose it?
16/09/13 Decent citizen
-5

@Coming to the boil, I hope you resolve your issues with your neighbour, but they sound totally obnoxious and unreachable with orthodox means. I wish I could give you a few dirty tricks to try on them, but I don't want to give out all my secrets on this site! good luck.
31/07/13 Joe from Splott
3

Coming to the boil

Actually, it might be time for a move, anyway. Possibly to Canton where I have some lovely friends or maybe up the Valleys - great for hiking.
31/07/13 Coming to the boil
3

Hi Joe, I work full time but go jogging in the evenings. Plus hiking/mountain climbing at weekends. Most of the time, I feel great. I just wish I had a better neighbour!
31/07/13 Coming to the boil.......
2

Wish I could - but they don't empty their own bins. Nowhere to put my stuff, the lid is sticking and it's still a week until they get collected.

I would like to take my neighbour's stuff out but it's unwrapped smelly nappies, dog poo and a bag of what appears to be car parts!!
30/07/13 Coming to the boil.....
6

Oh great - another load of stuff dumped in my bin. All things that should have been recycled. So, if the council checks, I will be the one that gets fined. Also, my lid is now up a couple of inches because of all the 'alien rubbish'. Another fine and a criminal record, if I'm not careful. Seriously thinking about moving, I deserve better neighbours than the ones I've got.
24/07/13 Coming to the boil ......
-4

Well, I decided to buy a new wheelie bin as the old one was really smelly with scratches down the side. I have since 'donated' my old one to my neighbour - I just pushed it over his side of the driver. Problem solved, or so I thought. But no.....he STILL won't put either his original or his 'new' bin out. Plus, he's just dumped a load of smelly, unwrapped stuff in mine. And today is around 27 degrees. I really don't think this is fair.
19/07/13 Coming to the boil.....
1

This is one thing that is guaranteed to cause friction between neighbours. Most of the time, I don't see my neighbours but would be annoyed if I thought someone was sneaking stuff in my bin. I don't want other people's smelly rubbish, thank you very much! And then just not bothering to empty their own bin....? OK, so it's probably never going to get hot enough in Britain for stuff to start to rot but even so!! I wouldn't advise talking to the prat - that will onlly end badly and let's face it, he's got all day to do some damage to your property. Only thing you could do is "hide" your own bin. But what a pain to have rubbish neighbours like that.
15/06/13 Yes I see
3