Yeah right, if only!  I would like to gripe about the media, and in particular the BBC.  They are supposed to be unbiased but the moderators on the "Have your say" forums seem to reject the many valid and non-offensive comments I post - presumably because the truth really hurts!

My guess is that these are part and parcel of the problems with the media in general.  The news that gets out is only what they want the public to hear, and they basically conceal everything else!  I have made some constructive comments which were true and probably quite valid (in my opinion), but because they were a bit too much for the BBC dimwits to accept - they simply rejected them.

Have Your Say is full of this kind of thing.  Someone can make a comment which has no substance to it and it gets published, but a more constructive one is rejected as if it is offensive. Why??  Some user-names reflect the rejection of their comments by the BBC on a regular basis, which basically means they are fed up of NOT having their say published. 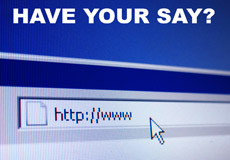 If people in control are not prepared to accept fair comment and reflect a true view from society, then more people need to stand up and get this suppression exposed.  Moderation is one thing, but censorship (cherry picking?) is quite another thing.  Obviously the BBC wouldn't want to highlight it's own failings and maybe the media in general wouldn't be too happy, but with sites like The Weekly Gripe and others, perhaps with the Internet we can break this glass ceiling of truth exposure enforced upon us by the media.

Why do these cowards hiding behind cyberspace not face up to the truth and actually allow people to "have their say".  I know how the Chinese feel now!

By: Have Your Say Critic

I am sick of Commentators and News Presenters on the BBC mainly, claiming that Johnson failed to deliver Brexit. The truth is that Johnson came back with a deal, which 'they' never thought could happen, opened the backstop, which 'they' never thought could happen and got agreement in principle on the deal. Only to be thwarted by Remainer MPs on the timing of the Brexit process.
It has got so bad that Remainer MPs have cottoned on. Corbyn even claimed it in his opening speech yesterday. And the BBC never challenge these MPs when they claim it also. STOP IT FGS !! I don't know why the BBC seems so keen on Labour when BBC employees will no doubt be targeted by Labour in a massive tax hike to finance all the projects they propose.
01/11/19 Grumpy Old Feller
2

why obey a supede law,have we got common sence or think for ourselfs, take fishing ,they dump good cod overboard because they out caurt in net and they have used up quote for cod, please tell me is this the law people should obey.next they will be talking about fih stocks how many people would be alive today if used for the starving in the world
13/09/19 pete
-3

I cant understand why the SNP in Scotland know want the people want,when more people voted LEAVE the eu than voted SNP
13/09/19 pete
3

I cant believe that over 75s are having to pay the licence fee again. If the BBC spent our money more wisely and paid less high salaries for less than high-end so called stars they would not need to be taking monies from the less well off. Out of all the tv channels, I watch the BBC the least, and I think its high time you paid your own way as do all other channels. Your programmes are, on the whole just not up to scratch considering the funds you have at your disposal.
30/11/18 asicit
2

I agree with your sentiment here but Voltaire did not say that. It was said by Evelyn Beatrice Hall in her biography of Voltaire

She coined the phrase "I disapprove of what you say, but I will defend to the death your right to say it" as a way to describe Voltaire's outlook.
29/09/14 Zanni
0

The BBC has become a defacto censor for the government.

To evidence it, try to place a HYS comment that the BBC does not agree with. It usually claims that a comment is "offensive" and removes it, when it doesn't want it posted.

Presumably, the BBC hasn't heard of the infamous quote:
"I do not agree with what you have to say, but I'll defend to the death your right to say it"
Voltaire

A,D Awhile back it became bad practice to allocate blame. Any course of action was deemed better than actually placing blame. I was once employed by a multi national that introduced a new fairer wage rate system for production staff.
It was designed to reward the most skillfull, & versatile workers. When my manager asked for a list of workers eligibility for the various new rates. He was aghast to see that a certain "William Maddox" would be the only one eligible for the highest rate. Being a recent arrival to the firm, I had used the criteria laid down by senior management to create the new "fairer" list.

How many skills did he have? was the main question. He had worked in all the production work shops, so he could claim all the skills.
He was a smart but useless, lazy, obstructive, individual, who had been passed from one workshop to another by weak managers.
Hence the laziest individual on the plant would be the highest paid. Fortunately for the firm a street wise manager noticed that William had a short break in service. The sentence "Whilst in continuous service" was added to the list. My manager breathed again. Did you get that job in politics Bill?
27/09/14 boblet
0

It tends to remove comments, first, especially if they not politically correct (as defined by the BBC, of course). Then, if there happens to be a successful appeal to the higher powers of the BBC, afterwards, the comment is reinstated.

However, the process that the BBC engages in to do this, ensures that the comment isn't reinstated for a long time. During that time, the comment moves down the chronological list of comments, resulting in an extremely low prominence, when it is finally shown.

The result is that hardly anyone will see it!

Still unrepresentative of those that give you life - the public and the licence fee payers!
27/09/14 Politically Incorrect And Proud
0

The BBC is a tool of government and censorship is rife.

I think that the BBC hit-the-buffers, really hard, when it had that confrontation thing with the government over Iraq and its Weapons of Mass Destruction claim(remember Alistair Campbell getting all worked-up on Channel4 News?)

Since that time, it has been evident that the BBC has become very timid of government and toes-the-line.

Personally, I think that the TV licence fee should be scrapped and the BBC disbanded, as it no longer commands the public trust and respect that it used to, in the past.

It is true that BBC moderation is ridiculous.

The censorship is rife.

They hide behind the usual garbage claim that a comment is offensive.

Of course, they aren't offensive. Its just that the BBC doesn't like them.

I hope that the TV licence fee gets abolished and, consequently, the BBC. Good riddance.
27/09/14 Johnny Rotten
0

Get rid of your television. Give yourself a mind cleanse. Awaken those inner feelings that have been lost through staring at that box for years on end. Freedom!
06/05/14 Phil
0

I agree totally. Any comments relating to multiculturalism are a big No No, - unless you're a frickin' Muslim telling us all how bad we are and how peaceful and tolerant Islam is...
I don't even bother to waste my time composing anything sensible on there any more, their have your say is about as democratic as our electoral system and I stopped voting in 1997...
15/09/12 Censored
-7

get rid of the BBC

The BBC is now nothing but a front for a state sponsored con of the people to accept a failed multiculturalist agenda and hype of themes like unpopular Gay Marriage. We need to shut them down and get rid of all the hangers on costing over £1 billion. BBC - Such a rip off organisation.
05/05/12 get rid of the BBC
-5