Who in their right mind would want to buy a TV licence to watch BBC1 online.  It's not exactly value for money these days is it and there are far too many repeats with only a few good programmes.  What is the TV licence fee these days anyway - must be around £15 a month?  I don't know obviously because I don't have one and I don't own a TV.  "Don't forget - to watch TV online as it is being broadcast, you still need a TV Licence."  That's the message displayed on the BBC1 home page.  Well don't worry about that folks, because just as I can't be bothered to buy a TV to watch The Beeb on a goggle box, I also can't be bothered to "tune in" online either.

You still need a TV licence to watch BBC1 online!

Now get this, according to TV licensing watching TV online streamed over the Internet is as good as watching a live broadcast, hence they DEMAND that you buy a TV licence just as you would have to to watch a television.  Well my gripe is quite simple.  It's NOT as good as watching a television and although it's definitely watchable, the image quality and frame rate are in no way comparable. 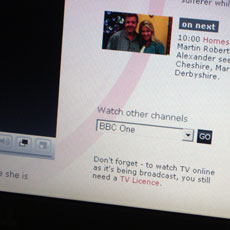 The broadcast is also significantly delayed enough in my opinion to not be classed as LIVE television. Add to this the fact that not all programmes are available for legal reasons and you've got a pretty much second rate service there so how can they justify the requirement of a TV licence to watch BBC1 online?  I think that's a bit cheeky.

I know most people have a TV licence (if you believe the statistics), but I just think that it's a bit petty of The Beeb to demand a TV licence be bought to view their online content.  What's the next step - a PC tax?  Besides, how can they possibly enforce this and how will they know that you're illegally watching television on your PC?  You don't need a TV tuner card for this and you can easily clear your browsing history.  I'm curious to know what people think about this.  Does anyone care?  Is this watching TV online the beginning of the end of the somewhat outdated television licence?

By: Not watching the BBC

well all tvs are delayed by at least a few seconds, for example a football match could be delayed by up to 10 seconds on ITV HD. therefore it's not a valid argument to say BBC online is not 'live' because of the delay. But technically this is a piece of law that is almost impossible to enforce. If you watch BBC online without a license, who's gonna know it? unless the tv licensing people come to your house and catch you right when you are watching it online.
10/07/13 Dave
-9

Perhaps one reason for the TV Licence it is a Government National Data Base and it gives the State extra enforcement powers of snooping?.

One fails to see why we should pay for the bloated BBC bureaucracy. Look at the recent scandal of the CEO being paid Â£500,000 and for what? During the 1950 and 1960's the BBC was perhaps giving a national service but those days are gone. We now have a vast amount of media systems to use almost to the point of saturation.

Their bloated news service is one of the worst; you see the same news all through the day...1pm/.6pm/10pm/ News night, not to mention the slot at about 8pm and their hourly broadcasts. Most, if not all of it, is just a rehash by different people.

Much of it just hype. Eg when their political commentator stands out side Downing Street. Does anyone actually come and say anything to them? He could be speaking from the top of Blackpool Tower. How much does this cost? All it does is give an impression of pseudo reality. If you turn down the sound and just watch the visual footage during the news, it usually tells you nothing. Pictures of buildings or
politicians who are getting in and out of cars. Admittedly, these are standard media techniques, but other channels don't charge.

So often the news is about trivia most of which has no bearing on our lives. They have a slot to fill and they have to fill with it something, and if there is no news they ask their own questions and make their own news. Look how many people the BBC had the Olympics and over 120 at a Glastonbury festival!

Or when David Cameron went to Canada and BBC team went. All they showed was Mr Cameron watching TV and diving into a pool. How much did it cost to send Nick Robinson there with a film team.? (The whole news system could be slimmed down and many of these overpaid people given the push.) Flights/hotel bills ect. Channel four does quite a good job of the news.

The BBC should be broken up and sold off as an outdated state monopoly. There is a book by Robin Aitken, an ex BBC employee.> "Can we trust you the BBC?" Then there is bias and other issues.
09/02/13 Graham the Rabbit
-11

Equipe52, operating under the name,
Team 365, 80 London Trading Estate,
Roding Road, Becton, London E6 6LS.
Equipe52, Ltd. Office address,
C/o. London Registrars, Plc.
4th floor,
Haines House,
21 John Street,
London WC1N 2BP
I understand the above companies are responsible for the delivery of the mail sent out by TV Licensing. I obtained the information from a letter sent out by an employee of TV Licensing and by checking information on the internet. I don’t have a television. It’s not worth the license fee, there is too much rubbish on whatever channel is selected. The objects still send me their love letters each month; I have refused to reply because of the vile and implied threats contained within them.
22/05/11 alvin
3

An umpteenth letter has arrived:-

As you have not responded to our letters yet, you have left us no alternative but to proceed with the final stages of our investigation.

Our Enforcement Officer has been scheduled to visit (POSTCODE) to find out if TV is being watched or recorded illegally. The Officer may visit your property any day of the week, morning or evening.

The information below explains the proceedure. You may refer to it during a visit from the Enforcement Officer.

I do love these letters and have been receiving them for years, they never include a prepaid envelope to reply or even a free phone number so I bin them. Besides there is no point in replying to tell them I don't have a TV as they may visit anyway to confirm the fact which seems to cancel the need to reply. YAAAAWN
05/02/11 mike3003
0

I will help spread the word Dazza. Thats whats wrong with our country, we need to have more say.
23/09/10 BigJohn
-13

I am up for doing something about it now. If the whole country will join forces then we can make a change. I mean would you miss bbc. I doubt it. We just all need a date when we all cancel our tv licence. Surley they cant take the whole country to court. Come on join forces.
23/09/10 Dazza1040
-14

What annoys me is that after moving into my flat two weeks ago and straight away buying a licence to watch colour TV so that I can watch BBC online and perhaps buy a television set I now receive a red-lined threatening letter from TVLicensing.co.uk telling me that (1) I do not have a licence (although they have confirmed that I have by email and on their website, (2) I have received many letters from them (this is the first), (3) that I have not replied to any of these letters. The flat has in fact been empty for many months, so there was no need for a licence. I bought a licence online before evening watching TV. Now they are threatening to come into my flat, i.e. my home/castle, to inspect it and to interview me "under caution", as though I am a common criminal. They then threaten to fine me £1,000.
OK, mister, just try it.
Make may day...
28/08/10 AngryLicenceHolder
-15

I concur with the above comments,Britans Biggest Con is totalitarian.Whats more i've just found out that,they're also exempt from the freedom of information act .which is outrageous as well! There should be large demonstrations every time some harrased person is prosecuted by this extort,but such happenings seem to be of low key.The bbc are truly legalistic thieves.
26/06/10 the subject
1

The BBC should send out coded data like Sky only watchable by people with a specific decoder,then you would not be able to watch it for free,which I doubt would worry many people of course the BBC would soon go broke which would also not be a problem as far as I'm concerned'.
15/06/10 arrawn
3

yup I don't pay t.v license and just watch catch up online. They should just pull there finger out and sell some advertising instead leeching off us
11/06/10 Nip
13

Julie, the other channels don't fund themselves, the advertisers do!
21/04/10 grumpyoldwoman
-11

We need to get the TV licence stopped for good. Why was freeview invented??? to view for free!!! It is only the BBC that get the licence fee, and quite frankly there are better channels to watch.
Why arnt the BBC funding them sleves the same as all the other channels.
Its daylight robbery and needs to be stopped!!
21/04/10 Julie
-1