The typical British holidaymaker in Spain, don't they make you just want to cringe?  The British (and to be fair German ones too) going to Spain and once there plunging into the "All Day BIG full English Breakfast", Pints of beer rather than the standard Spanish offering that is easier to drink and not asridiculous looking in a woman's fist!

They order their food and drink in loud precise English (lets leave the German's out of this), when they could just try a small simple bit of Spanish even if the waiter then answers in English.  He, at least would have been pleased that you tried. 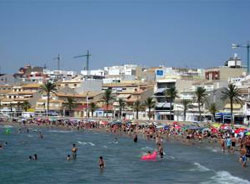 Once they've consumed their stodge you'll see them walking around the town half naked with blubber hanging out everywhere, I mean who wants to sit having a meal with that sight in front of you?  Wearing hats inside restaurants... why?  Huge fat people wearing sports clothing in garish colours - old men wearing cropped shorts (like Hobbits) and baseball caps, don't they know they look stupid?  The worst sin so far is seeing people (men) wearing desert combats when they are clearly so NOT serving soldiers they make me laugh.

All I can say is that the German's currently think the Russians are more boorish and uncouth than the British!  For heavens sake please act like a true Britain's and be classy, stylish and happy to absorb and learn about the culture and language of the country you are visiting.

Be classy and stylish on holiday why When i am on holiday i dress for the night and dress in shorts and t shirt for the day you must spend you time looking at every body that is passing by to see what they are wearing and if that is not bad you have to have ago at what they eat as well get a life.
03/08 Shutty
0

Yeah, the Brits are either the one's with their noses stuck in the air, thinking that everything's better back home, except for the waether, or are to be found lying in a pool of their own vomit singing God save the queen. Not much difference if you think bout it, is there?
30/06/14 Benson123
-1

Most British abroad are uneducated, plastered yobs who think etiquette is a cat food.
07/05/13 Jatwingian
-1

British tourists can be an embarrassment to their own nation and are some of the most ill mannered you're likely to come across. They do the exact same thing in their hometowns though! Binge drinking and lenient parenting are the main reasons why that happens. UK has always been a fairly
anarchic country so no surprise.
17/02/13 JayZee
6

I remember being on a beach in Greece once. All the Europeans, including the British, were speaking at a sensible level of volume. A group of Americans could be heard all over due to the fact that they were incapable of speech without shouting. Incredible! And, they were completely oblivious to the irritation of all the presumably mainly Europeans sharing the beach.

All nations can have their problem types, but it seems that the British is often much more noticeable as they depart in their thousands to escape the miserable, British summer weather. The Americans aren't so much noticeable because so few of them bother to explore the world outside their own borders. Bless them.
02/08/12 miserablemoaninggit
-4

JOHNGGGGGG, have you ever heard the saying "those who live in glass houses should never throw stones"?

Yes SOME British tourists behave very badly and you may find them amusing, but some of your countrymen aren't much better! Loud shirts, lots of polyester (sweaty), mostly obese, very loud and pushy. They also don't seem to read up beforehand about the places they visit, so end up asking the most stupid questions imaginable.

They go around from one place to another on coaches just to tick them off on a list. Get off the coach in Barcelona, quick shufti (look) at Sagrada Familia, back on the coach; that's Barcelona done.

The grumpyoldman and I don't go to Spain much; we've visited Barcelona and Palma (Majorca) for weekends; but often get taken for locals in any European city we visit as we dress and behave with a bit of decorum.

By the way, I'd love to visit California one day, but I can't guarantee you any entertainment from my bad behaviour!
02/08/12 grumpyoldwoman
-1

I recently went on vacation to Magaluf and thouroughly enjoyed my holiday as I spent almost all of the daytime sitting next to the pool watching the the British tourists make complete fools of themselves. Daily highlights included massive family arguments, vomiting across a table in the middle of dinner, falling drunkenly flat on their faces, a couple of punchups, the worst dress sense you could imagine, the constant complaining about absolutely everything insignificant and more ambulances, broken bones and cuts and bruises than on any medical TV series! To be honest you cannot beat the English tourist as a form of entertainment. So next time anyone complains about a certain town or city to avoid going to on holiday remember the British tourist is a great source of entertainment. JUST SIT BACK AND ENJOY THE SPECTACLE!
By the way the locals absolutely detest the English tourists and only put up with them for the money.
John G (Oceanside, California, USA)
01/08/12 JOHNGGGGGG
-2

Maad, in my opinion, Spaniards are no more or less attractive than the Brits. It seems to me that many Spaniards become short, round and fat as they get a little older, but then maybe I've been unlucky in those that I've come across.

I don't recognise your description of Brits in Spain, but then again I've only been to Spain once and certainly have no desire to travel there again.
08/07/12 miserablemoaningit
-10

In opinion of my Spanish friends Brits look like the ugliest and are the rudest European nation. No manners no respect to any other country but Britain. This probably apply to a vast majority of holidaymakers. Sad times...
08/07/12 Maad
3

Far to many moaning sods on here who should live and let live, if you don't like an area because a certain type of person goes there then simply don't go, there money is as good as yours deal with it :)
28/02/12 Gray
2

I went to Majorca in September and I went to this bar in Port d'Alcudia and this German family bring their kids and they are clearly tired, bored and want to go to bed when the adults were selfishly having a few drinks too many! To be honest, a bar isn't a place to take your family too. They probably didn't have a siesta either as they were so dog tired. Same in the restaraunts in many areas at 11pm or midnight local time, there are families with toddlers who are the last table to be served and the poor kids are being tormented by the fact that they have to be eating so late when it is way past their bedtime! If they are eating so late why aren't they having a siesta before then? That's what the Spanish do with their kids. I see Spanish kids up very late but they are full of energy and life because they have siestas. In fact they go to bed at 2 or 3am on a typical night but are not so tired because of sleeping during the day when it is hot actually. The nights are more tolerable to do stuff anyway.
01/01/12 Angry Autistic Female
3

Mimy, I'm still under 60, only by a few years though, but have had very little respect for the behaviour of a large proportion of British holidaymakers for as long as I can remember.

The grumpyoldman and I can relax perfectly well and still behave in an appropriate manner and be appropriately dressed for wherever we are. It's called "decorum", a thing which few people have these days.
30/08/11 grumpyoldwoman
2

Mimy - "I just know that no person below 60 would be so judgemental and speak such nonsense!"

That is nonsense in itself isn't it? Do you really think that no person under 60 is ever judgemental or speaks nonsense?
29/08/11 Carrot
6