I've just come back from a holiday in Mallorca and have found the behaviour of the Brits out there quite shocking.  We've all heard numerous stories about this and based on what I witnessed I'd say it is all completely true.  But the thing that bothered me most was the business with the sun loungers.

I vaguely remember a Carling advert many years ago which mocked the Germans and the fact that they were renowned for reserving sun loungers with beach towels.

Well I can testify to the fact that that advert is completely wrong and it is actually the other way round with the Brits being the ones who hog all the sun loungers.  You can tell by the beach towels which have Union Jacks or some football team such as Manchester United on them.  The photograph below was taken at around 7.45am just before breakfast at the hotel that I stayed at.  Whilst there were the odd Spanish and Italian family there, most of the guests were in fact British.  Very few of them didn't have towels on and there was hardly anyone around using them either. 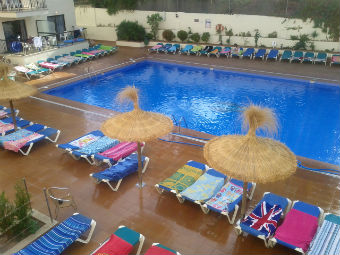 Presumably most of them had decided to "claim" their sun lounger for the day before heading off for something to eat.  They weren't even prepared to wait for the hotel staff to finish cleaning before unstacking and laying the loungers out, the poor guy had to clean around them with his hosepipe.

This happened every single day and only now and then would one become free in some shady spot that someone didn't want to be in and one of them I suspect was broken anyway.  Throughout the day they'd remain occupied, reserved with a beach towel whilst it's "owner" was sat by the bar having a drink or in the pool having a dip.  Personally, I think that this is quite selfish behaviour and I'm almost ashamed to be British.  I believe some hotels have a "No reservation before 9.00am" policy.  I'll definitely be considering them in future!

By: Ashamed to be British

A similar thing happens in libraries where students will plonk down a couple of textbooks by a computer terminal and then clear off to a lecture or have a couple of pints, returning to 'their computer' a few hours later when it suits them. Meanwhile, other people are waiting. I think there should be a policy which states that if the books are there for 30 minutes and nobody uses the computer terminal, then library staff have the right to remove them.. They can place the books on a table for their owners to collect when they return.
16/07/13 science student
-1

I bravely threw a dozen towels into the pool, before boarding my coach to the airport. Sadly of course I never got to see the fury of the (mostly) scouse morons who did the towel trick each morning.
23/06/13 BennyfromCrossroads
4

This is common in the U.S. But a lot of people will simply toss the towel aside and claim the chair for their own.
29/10/12 Gillian
-8

Where we holiday, the scousers stay in the cheap highrise 20 mins walk (that's a long walk if you're from Liverpool) from the beach, so I cannot blame them for the towels on the sun loungers, just the German, Dutch and Norwegian twats who stay in my beach front hotel!
20/10/12 EddieBooth
-8

Where we go we have to rent sunloungers at 3 euros per day each, plus sun shades at 2 euros per day. We are backrupted by the beach mafia.
05/10/12 Victim of Corruption
-4

Ashamed to be British

Holidays shoudn't be stressfull! It costs a lot of money these days to go away, life is hard and people need to be able to relax without queueing and fighting for everything. There ought to be enough sunloungers with parasols in the hotels to cater for the amount of people residing there. Simple! It's not rocket science! Hotels owners:Take note!!! But yes...the British are greedy, pushy, fussy arrogant and an embarassment whilst abroad. I am ashamed to be British and can understand why other nations dislike them!
04/10/12 Ashamed to be British
-6

Let's face it, the average Brit abroad is a scumbag. They haven't a clue how to behave in public in the own country never mind in a foreign one. Reserving sun loungers is typical of the selfish 'me me' mentality too prevalent these days. I agree that all the towels reserving loungers should be removed and dumped in a pile - either that or request the hotel post notices that it isn't permitted. These days you have to teach people how to behave and how not to be obnoxious, especially the British. Sad really. How times have changed over the decades.
14/09/12 Mr Rupert
-1

I agree with Peter below. I've lived in Liverpool all of my life and have never had to go far before encountering ignorant and idiotic people. My City is full of them and it's even worse to go abroad and to see that the rest of the UK population also has it's fair share of scum.
30/08/12 Arch Stanton
-1

Youthful Griper there is no need to throw a towel in the water. All you need to do is to collect all the towels at the start of breakfast time and leave them in a pile at one end of the sun deck.

We did that once on a cruise and there was little or no problem after that.
21/08/12 Charmbrights
-1

I must admit I was really dreading my holiday to Gran Canaria, believing it to be like Costa Packet in Spain: full of foul mouthed Brits showing off, getting drunk and ruining the peace for everyone else and having to contend with loud chart pop music everywhere. But I did not experience this at all. I suppose it helped booking a 5 star hotel, with balcony views from my room and with fresh Lobster and Prawns decoratively displayed each evening in the dining hall and a Jacuzzi and gym just a few doors away and two swimming pools to choose from - one typical lane pool, another a windy path pool. It was not exactly the kind of place you would normally find loudmouth chavs; instead, it was more the executive business types. It was so nice, I extended my stay by several days. This hotel was largely populated by Germans instead, which probably explains why I was greeted with Rye Bread, Ham, Salami and cheese for breakfast each morning and not Toast, bacon and eggs.
20/08/12 Grumpy xx
-8

A minor point of order, you will see Manchester United shirts in any news report from all around the world, so the prescence of MUFC towels is not really proof of 'Britishness'.

However, I agree on your wider point, my solution would be a returnable deposit on the loungers or even a rental fee, it's not unheard of, remember deckchairs on UK beaches. Even a 5 Euro a day charge (or 20 Euro deposit) would slow down the 'hoggers' and the loungers could only be available after 9:00am or breakfast is finished.
20/08/12 Timelord
-7

Surely it is for the hotels to crack down on this ... either say 'no towels' and ENFORCE it throughout the day or, if a sun lounger hasn't had a bottom on it for, say, an hour, remove the towel.
20/08/12 Sham
0

I live in Liverpool, born and bred, you dont have to go abroad to see ignorent British people, look no further than the next door neighbour and on and on down the street it goes.
20/08/12 Peter
-2