I really enjoy watching BBC click, it's probably one of my favourite factual programmes and I regularly tune in to watch it on the BBC iPlayer on the Wii each week.

There's only one thing that spoils my viewing pleasure though and it's TV presenters who mumble.  I often find it quite difficult to follow what Spencer Kelly is talking about.

He often starts of talking about something and then suddenly starts to mumble or lowers his voice making it difficult to hear what he is saying.  I could of course turn up the volume but then it would be loud for the rest of the programme.  Has anyone else noticed this?

To some degree Kate Russel does this as well, although not nearly as bad.  I don't find the Webscape part of the programme that interesting though as it's mostly full of gimmicky sites that to me appear more targeted towards the fairer sex. 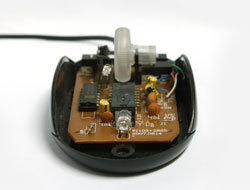 Yes, I know what you're thinking.  It's your flaming hearing mate, you're probably going a but mutton geoff!  Well no, actually it's not.  My hearing is actually very good and I don't think I can blame it on me watching Click on the Wii/iPlayer either.  Everything else I watch on it is fine, it's definitely the TV presenters in this case.

No offence to Spencer.  He seems a pretty knowlegeable guy and the stuff on BBC Click is really interesting.  I just wish the dialogue was all spoken at the same volume level and with a consistent tone.  Maybe they could do something in the production suite before broadcasting the programme.

Come on man... speak up for goodness sake.  As a 'TV presenter' we actually want to be able to HEAR what you've got to say!

“The ultimate robot I think we are going to see soon is the self driving car. I think robots are coming. They might not look like humans, but they are essentially machines that move about and do stuff. Artificial intelligence is the next big thing.” Ouote from the benighted Mr Kelly.
08/01 billc
0

Does it matter. This program falls between two stools. It's not going to teach kids anything, and for anybody with an interest in computer science, it's very hard to watch...very hard indeed.
08/01 billc
0

Spot On. Their dramatic delivery leaves much to be desired. Presenters and commentators should should be dissuaded from Shakespearean aspirations.
23/12/16 Michael
2

If Spenser is a mumbler, then what we can say about Kirsty Young and Sophie Rayworth, they are mumblers too. Surprisingly i do enjoy the voices of John Hannah, who does the Ad for American Golf, and Neil Oliver who presents BBC documentary COAST. The voices are soothing, calming, and makes you want to listen to them ... they should do voice for Yoga Videos.

On different on appropriate voices ...I once attended a Yoga Class by a former top ballerina in Canada, it was a difficult class for me, becos she voice was high pitched like Minnie Mouse .... for sure I am not calm at all during class, i was worked up
06/07/14 cindy, twickenham
1

Totally agreed, this is why I found this site by googleing
21/04/13 Ivan singapore
-1

Spencer Kelly is so mediocre, the worst BBC journalist in living memory ... and that's saying a lot!

He's so patronising
He's so smug
He's a Jeremy Clarkson wannabe (without an ounce of street cred.)

Hey Spence, you somehow got an Oxbridge education (only reason you got the Click job) but you're more annoying than anyone I know on BBC.
Do the BBC pay you for your drivel ?
09/04/13 CoolerThanKelly
2

I find the increasing use of so called "regional accents" (particularly Scottish) among presenters on TV and radio and for voice over on advertisements irritating. The BBC seem to be one of the worst offenders for this.If a report is coming from say, Scotland a Scottish reporter seems appropriate but when the report is coming from another area particularly if it is England, can we have an English accent. My hearing is not as good as it used to be and I find that I often miss some of the comments due to my inability to understand the words. It takes a little time to adjust
14/09/10 Telbel
6

Hmm.. yes, really old fashioned with the writing and everything. Need more pictures for the simpletons who can't read I guess.
28/04/10 AOD
1

Ivbe got a worse gripe about TV presenters....

Pundits in the studio ie 'BBC Homa Affairs Correspondent' or if they 'Go Live' to a disaster/war/crime scene.

all that stupid stuttering is to try to sound dramatic. Its on every news program.

They all go to BBC school to 'learn' those hand signals,stuttering etc..

Perhaps he is being forced to leave by BBC managers who want a bigger slice of the cake?

Some BBC managers are on mega money, hundreds of thousands a year,

I couldn't agree more. What saddens me though is that this vile, smarmy, reptilian excuse for a human being will go to another position with another broadcaster who will pay him an obscene amount of money. At least it won't be public money any longer.
07/01/10 MikeP
-6

There is one woman newsreader on BBC news 24 who really should be removed. She seems to have a permanent cold, or is it allergic rhynitis, always looks as though she has just got out of bed, and slumps on her desk like she's tired out.

She was shown in Beijing during the Olympics speaking Chinese. Great, but the woman has a health problem. I don't want to see her at mealtimes.

Nor do I want to see obviosly pregnant weather girls. Please, cover up your bulge.
13/09/09 TIG
3