I do not watch much television at all, and not a lot of the commercial channels in particular ITV, Channel 4, Channel 5 etc.  When I do tune into these stations, it really annoys me when during the program they flash up on the bottom of the screen what's coming on next!  It is very irritating and in my opinion fairly pointless.

I remember once I was watching something on TV and there was something written somewhere in the program that I was watching wish I wanted to see but this was obscured by the blooming text the TV company had put up telling people what was on next!

Just as annoying if not even more so, is when the program reaches its end and the credits come up.  Why on earth do they shrink the credits into the corner of the screen so it is impossible to see them just so they can tell you again what is on next, then what is on after the next program and so on?

Most people have access to a TV guide of some description.

Do the television companies think that we do not have TV guides or are incapable of finding out for ourselves what's on next?  Most people have access to a TV guide of some description, be it on teletext, the EPG on Freeview or Sky.  There's even a TV guide in most newspapers and magazines.  If all else fails, plenty of websites out there with TV guides if we want to know what's on. 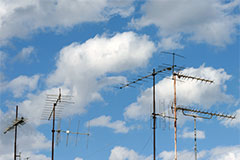 A few times I have been watching something and have seen a face that I recognise but just cannot remember who it is, or there is someone that I thought was particularly good and would like to see another program with them in.  However, it is then very frustrating when I wait for the credits to find out who the actor/actress is and they decide to shrink the credits preventing me from finding out who was in the programme or film that I had just watched!

I do wish they would stop this and let us all watch a TV program from start to finish with no interruptions or on-screen distractions.  I guess that is one reasons I watch the BBC more than ITV.

Some of the Ads are better than the programmes ! The current Virgin Ad featuring Vladimir the Vampire is like watching a mini Ep of a sitcom! It wont entice you to buy the product but it's very entertaining! ("It's not ketchup"!)
10/05/17 Jason
6

Yes i agree with all the irritating things you have mentioned. Even more irritating is when there is a sad end to a Drama, an aggressive voice over ,introduces the next programme all over the theme music at the end which spoils everything the director intended. Even more annoying are the northern accents used ,like the one after watching tonight's Endeavour ,when the beautiful Morse theme tune was played.I don't know why people in the Meridian area need a voice introduction in a Coronation Street accent. I am sure people from oop north wouldn't like a strong Dorset accent introducing there next show. Come on ITV let's have a normal clear speaking voice like the BBC. Your aggressive advertising doesn't work with me or most of the public because we have the remote control to switch to another channel so it falls on deaf ears! !
11/01/16 Victor Meldrew
4

You say you do not watch much tv, why not go "cold turkey" and give it up, the savings are immense, TV licence, Sky ? Virgin ? you could be saving over £6-700, enough to invite a couple of hookers over for a weekend
10/07/14 www.easyhandyman.com
-4

I just watched Hawaii Five-0 on Sky 1 HD. It had just got to the point 7 minutes before the end where the climax of the episode was beginning. Suddenly the screen was split in half as they had to show me what was coming next! What the hell is that all about. It utterly destroyed my enjoyment of the whole episode. This is not the first time this has happened, even this year. Also, Ch. 4 has twice recently muted the climax of a film so some disembodied voice could jovially take their time telling me what was on next.
Virtually everyone who has a TV nowadays has dozens of options for finding out what's on at any point over the next week. I don't need to know that a crappy reality TV show that I detest is coming on next! It's no wonder sales of DVDs for TV series and films are so high; it's about the only way to watch without unwelcome logos and adverts these days.
12/02/14 SoothSayer
1

I totally agree with this, and I found this gripe by searching for my gripe....That we can no longer watch a show without being bombarded with text on the screen, interfering and distracting with info that we don't need to see the entire program. Then there's the station logo text. And then other moving text dancing on the screen in the middle of the program informing us of what looks to be vital but trivial. This has made other viewing options more and more sought out. And I refuse to be reprimanded for believing it would be good to stop this annoying marketing practice so the program would be more enjoyable. I've been watching hbo more because of this. They allow you to have a moment or two of true r&r.. In this very moment I am watching a nature program and it's ruined with all the text. This is a bad practice.
24/11/13 No kidding
4

i dont like logos ( bugs ) and messages maving across the bottom of my screen ( creepers ) . i use them as a tie breaker . example . if there 3 shows i like on at the same time . golf tounament , football game or soccer game . i watch the one that has the least amount of logoes and or creepers .
07/09/11 george
1

Mr Angry, I couldn't agree more.
Have you also noticed that the particular part of the credits that always gets shrunk is the cast list (the most important part) but when that's finished we sometimes get to see the rest of the credits.
Let's start a petition.
26/05/10 Paul J
2

the bbc are just as bad! yesterdays Dr Who was runied at the end by a stupid little graphic telling us that moron Graham nortom was coming on next with some pathetic no-talent show. BBC- I want to watch the current program from start to end, I DO NOT want to be told what's next until it's finished!
25/04/10 mr even angrier
-3

Please stop putting those annoying on screen logo's. Some of them are getting bigger and bigger and they get in the middle of the picture and sometimes it's even on the actor's faces. Have you seen Dr Phil's logo its practically on the whole screen. I know what station I am watching. I don't need anyone reminding me. If they want to put them on put them on the very bottom of the screen not on the picture itself.
20/02/10 MORGANA
8

It would be so bad if they were able to do this competently. Today (Christmas Eve 2009) Five managed to shrink the screen and mute the sound of "A Christmas Carol" for a "next programme" announcement even before the drama had ended. As a result, they managed to mute the final narration of the story, and ruined an excellent film.
24/12/09 Chris
5

This is not a viable gripe, in my opinion. I complain about many things others would find trivial, but this is ridiculous! Surely you can simply grin and bear it while your credits shrink to the corner of the screen or you can't read the caption on the TV screen, while millions of people the world over don't have access to clean water! Ever heard of IMBD? You can look up actors from various shows on this website, instead of wailing about how channels have no consideration for people trying to watch. So they'll take up 30 seconds of your time. Big deal! Geez, what some people gripe about these days, you must have an incredible life is this is something that actually bothers you.

Dave Steward - I have Sky+ HD and my tv guide looks exactly the same as it always has done. Nothing has changed here.
14/04/09 Disillusioned Sky HD User
7