I was once disabled but have always been gifted.  However since adapting to normal life and talking about my experiences, many unfortunate families who have had children with special needs have told me of how the public services offered by the state have in many cases made it worse for their children and them.

Going by my own past experiences I have reason to believe that with the public services having the highest level of incompetent workers, thus low self-esteem and looking for opportunities to get one up at the expense of others.  I wouldnt be surprised if some of the workers like to play God on some of the vulnerable people they have responsibility over.  For example they could be office workers who purposely stereotype their clients and not treat them as individuals, mostly because of what I believe to be a personality or attitude disorder they are trying to hide, and so they get a fling out of controlling the vulnerable.

How do I know this?  I used to have epilepsy and could outperform some teachers in some subjects in school, but due to the frequency of my seizures I was labelled as subnormal by a disablement resettlement officer.  I found out after I couldnt progress in my career by getting a friend to obtain a reference from my employer so I could see what was being said and it stressed my so-called inability through having seizures.

They wanted to get me for as cheap as they could... 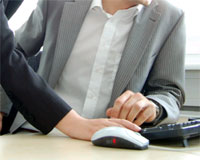 The effects of a seizure and recovering took effect less than 2% of the time so the remaining 98% of the time as gifted certainly outperformed 100% of an average person.  They were exploiting me and wanted to get me for as cheap as they could and for as long as they could, but I walked out and went into business to prove my capabilities.

I believe that many unfortunate individuals in care and under some sort of officer in a local authority or civil servant are being undervalued by the judgement of these public service workers and if they cannot get out of this trap then they are stuck, just like there are many elderly being abused.

I would have been if I hadnt uncovered the truth, so I would like to make those of you out there who know of or are close to someone who is unfortunate and needs care or support to watch out how the public services are treating them.

If the public services get away with it then it gets brushed under the carpet, but I want to expose what has gone on to help prevent the vulnerable from this bureaucratic abuse which seems immune from prosecution due to not having appropriate evidence.

Hello again,
I am commenting now as my friend who is vunerable due to having schizophrenia and has been on DLA and ESA for the last few years, has suddenly with no prior warning having his PIP which is what replaced DLA being stopped. His income has been greatly reduced at a stroke and he has started drinking again which was a problem several years ago.,
It has actually been stopped, he's put in an appeal but I don't know how they expect him to get and keep a job as he has episodes of hearing voices that means he would just walk off somewhere quiet no matter what he's doing at that given time if he has one of these bad turns.
He has to have an injection every 2 weeks at a surgery as well as the medication he takes daily to keep on top of things.
I hope that the people who make these decisions to cut benefits never have to see a relative who may be in his shoes go through this, maybe then they will stop doing this to people who who are unable to work despite wanting to.
Crack down on the 15 kids families who rinse the system and never put a penny in, not people such as my friend,
30/07/16 ahforfoulkessake
0

too many idiots with too much power to mess you about.
10/03/16 ahforfoulkessake
0

Benefits & sanctions that's what that fool Ian Duncan smith has caused , a trap to make people become homeless & find themselves lost in a failed system !
But hey some Romanian scum gets a new house !
18/06/14 Bulldog
1

Tell me about it! as a teenager I spent 18 months in an adolecent psychiatric unit because of school phobia. When people found out that I`d been in this place, they would speak very slowly to me as though I was deaf or, as they obviously thought, retarded, although I`m of normal intelligence. People drive me up the wall with their ignorance sometimes!
19/03/13 hairyfairy
17

Yes I have had brain surgery. At least I now get treated more worthily of what I deserve and not undermined by bullies and cowards who are insecure and not happy with their inferior capabilities.

I was not going to let public service workers who are intellectually weak and those control freaks in authority that were psychologically warped decide what I could and couldn’t do, or what was best for me especially if they think brain damage mean less intelligent, and have to be corrupt like Gordon Brown to win.

Most people I get on with are positive and pleased for me now that I have got what I deserve, however there is a minority who are rather envious of my progress but then these are often people who are insecure because of their lack of quality and achievement, and consequently expect preferential treatment and rely on beggars’ belief.

Anyone who cannot accept the truth about me for what I am has got a problem.

Take a look by going to

Liz - you sound as if you expect Bonehead to be treated as subnormal just because (s)he has brain damage. Well (s)he deserves to be treated at least the same as all ordinary people which is better than (s)he was. Or is this beyond your IQ?

It seems like there have been many exceptionally intelligent people who have been treated like dirt in their life but later proved their worth.

Although not a psychiatric condition, but many brilliant people have a history of epilepsy, and because it is a brain condition, it is relevant when discussing superior brain functioning. There are at least two theoretical possibilities why epilepsy may have a beneficial effect on one’s thinking. Firstly the electric discharges that occur during an epileptic fit may cause flashes of new ideas. Secondly, recurrent epilepsy or the transient hypoxia it can engender might fortuitously cause minor damage to those areas of the brain that inhibit thinking, and this disinhibition of thought processes may enhance creative thinking. Famous people who suffered from epilepsy include: Julius Caesar, Alexander the Great, Napoleon Bonaparte, Pyotr Tchaikovsky, Charles Dickens, George Handel and Hector Berlioz.
19/03/07 Professor Plum
13

It seems like Bonehead has experienced enough of this stereotyping...

There are an astounding number of epileptics who are now confirmed geniuses. In fact, it has been proven that up to 35 percent of people with temporal lobe epilepsy have a genius level IQ, which is significantly higher than in the general population. No wonder such people are mocked. That's a pretty threatening statistic. Note also, that of those with temporal lobe epilepsy, we are up to almost forty or fifty percent more likely than the general population to commit suicide and something like four out of five people with temporal lobe epilepsy has made some type of suicide attempt or suicidal gesture and suffer from depression. I don't think it's crazy that we're speaking of. I think this stems from living in a world that cannot accept a person because they are different and they are different in a way that is shiny and new. People like Lewis Carroll or Sylvia Plath were and sometimes still are, so universally hated and yet loved that one wonders what that is about. In life, they were pretty much hated and treated poorly. In death, they are revered and mythologized.

Too often, we stereotype and assume, and one such assumption seems to surround the mentally ill. And other, those who have neurological illnesses like epilepsy that are not mental illnesses, yet the ignorance of frankly, far too many, label epileptics as such. Which is not to say that there is something awful about being mentally sick or manic depressive; there isn't. What bothers many though is the ignorance, and then, not only are they stigmatized, but it's the wrong stigma, which is just dumb and really aggravating. If you're going to marginalize someone, at least put them in the right category. If you're going to label anyone, be smart enough to know which label and where you can stick it, because I've got a few of my own for those who undermine others and know exactly what you can do with your labels.
19/03/07 Professor Plum
6

I do agree with you, but you do come accross as arrogant in your belief in your "giftedness".and that undermines your argument. What if you weren't? Why should it make a difference what your IQ is as to the respect people should treat you with?
(The other thing that struck me is that you "used" to be epileptic. Did you have a brain op? I'm not being sarcastic, I'm genuinely curious!)
13/03/07 Liz
8

Gifted? Gifted in what way? Welcome to the real World. Us average people have to live with being stabbed in the back by employers too.
Sound like maybe your attitiude had something to do with it........
12/03/07 Bronson
1

Aspergers syndrome - bullied by everyone