I was recently both shocked and sickened at the attitude of three female care workers, who were accompanying a group of five disabled people in a garden centre.  And before anyone starts on about how difficult a care workers job is, yes it can be extremely difficult and sometimes practically impossible, if it is being done correctly, but these three should have hung their heads in shame, after all they chose a caring profession, and if they do not have a caring bone in their bodies, they should not be in the job.

One of them was so nasty to a woman in a wheelchair who asked to be taken to the toilet, she said to her,"I'm sick of you and this running in and out of toilets everywhere, that's why you're wearing a pad."  This was said in a tone of voice which could be heard by a number of people who were shopping there.  My heart went out to the poor woman, what an embarrassment for her.  This young woman who was the care worker clearly did not want to be taken away from her texting on her mobile phone, and saw the duties which she accepted payment for, as little more than an inconvenience to her personal life. 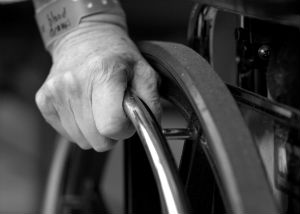 As for the other two, one stood at the door of a glasshouse smoking, chatting on her phone, and totally ignoring the girl she was in charge of, who stumbled and fell, and was quite distressed.  Nevertheless, she continued with her conversation before coming to see if the girl was alright.  Fortunately, a group of staff and shoppers from the garden centre had come to her rescue, while her carer finished her conversation.

The third care worker just stood there ignoring everyone and drinking a can of some sort of high energy drink.  {WHICH DID NOT APPEAR TO HAVE ANY EFFECT ON HER ENERGY LEVELS} What kind of people would treat disabled people in this uncaring manner?  I have tried to speak to someone from the centre this group came from, but they do not appear to be very interested in how their staff neglect the people in their care and have more or less said, as long as everyone is OK, then there is nothing to worry about.

Call me an interfering busybody if you like, but if this is the standard of care that is acceptable by some day care centres, heaven help us all.  I think it is time that care workers out for trips with disabled groups should have somebody monitoring their behaviour and the level of care and support given to anyone in their group.

I am a support worker supporting people with a learning disability, I agree with you
people like that are a disgrace, and reflect badly on the majority of professionals who
work in social care, please report the incident that you witnessed and the name of the so called care provider involved to your local social services dept. We all as part
of a caring community have a duty to protect the most vulnerable, the care quality commission have the power to investigate care providers and in doing so will protect
vulnerable people please, they need to be protected from harm but social services need evidence before they can act.
23/11/13 Janey
-3

Any court "official" or any other official in charge of allowing a prisoner doing community service to be care workers for the disabled should be jailed themselves.

The prisoner didn't even care enough to be a responsible member of society - how is s/he going to care about what happens to someone disabled? Therefore the person or persons responsible for such a cruel, insane legislation should be brought to trial themselves or removed from office and fined for all the grief they have caused the unfortunate disabled people.
26/06/11 Time For Change
-3

Yes, I'd report them. I work in a hospital, so a partially different work environment. Too much work to care properly for people but you do your best.

However, IF the female indirectly told to soil her pad, were in need of hoisting or more members of staff to assist, then the responsibility lies not only with the care workers to identify work environment hazards or safety requirements for the patients and staff (more staff), but moreso the senior staff that sent them out.

While I endorse your comments, do you realise that a fair number of these "care workers" are actually offenders doing community service? Community service is not just tidying up parks or painting walls, it includes working in council run care homes.
16/05/11 Timelord
2

Disgraceful! They need to be reported. If the center is showing little regard, Hals suggestion to contact a higher authority is the way to proceed.
16/05/11 Vin
0

I know exactly what goes on, I recently visited Poole in Dorset from Liverpool and there is a lot of Liverpool women up there, including my sister who is 62 and they have been preying on the disabled old people for years, no wonder Scouses get a bad name, suffice to say I dont talk to my sister anymore she just rips money off people who are in their 90s and my sister is a Jehovahs witness, I thought butter would not melt, but she has been doing it for years and all her family do it and one woman in a care home, again from Liverpool was telling my missus how they turn people against their families and get them to name them as the next of kin, my missus was fuming, we just got off asa like you said there is no one to talk to.
16/05/11 Peter w
-6

Noting on the previous comments about minimum wage, I myself work in a job for minimum wage and still manage to put on a happy face and try to help those I serve. It's really not that hard; money should not be a motivation for care work, but the rewards for helping people less able than you to live productive lives.
I have to agree tenfold that there should be a much better management in place, but there should be a much better management in a lot of other required services (eg. social services) as well.
16/05/11 Ju
-10

"the duties which she accepted payment for"

Don't quite a lot of people regard their jobs as a necessary evil?

And you do realise that these care workers get paid the absolute minimum legal wage, because society does not value their work enough to pay them properly?

Continued......
The staff sound like they are lazy and demoralised, and probably released from the watchful eye of a senior staff member for half an hour, took the opportunity to skive. However again, sign of this behavior must be evident in their everyday work and it is the responsibility of senior staff to recognise this and amend the situation. Having limited experience in a senior role I have noticed that with the job market being in such a state many unsuitable people are sent for interviews as care assistants - the really 'good ones' are rarely out of a job and that leaves people that are forced to look for work or lose benefits - hardly a great incentive for forging a career. The wages are shocking in the most to be totally honest, and I have often spoken to people that have always liked the idea of being a care assistant but cannot afford the drop in pay from their office/shop/driving job. These are the kind of people the industry needs - they WANT to do the job, they have not been forced to find a job - any job - and therefore are enthusiastic about what they do. Again it boils down to the same old thing - as a society we are badly failing our elderly, ill and disabled. There is no funding, therefore little training and support therefore poorly trained staff. I think in this situation I may have written a letter of complaint - all registered homes must investigate complaints and report them to the governing body. If you feel that strongly then persue it, nothing will change until society demands it.
15/05/11 KT
6

While I absolutely do not condone the attitude and lack of respect for their clients and the public in general in this instance I would like to play devils advocate a little. You say there were three carers and five clients, personally as someone who arranges trips for a similar sounding client group; I would usually have had the ratio higher - one staff to one client is ideal but often unattainable. The lady in the wheelchair may require hoisting/ or the assistance of two people to use the toilet, this would leave one person in charge of four clients - that could prove quite tricky for the most dedicated and alert care assistant - which this lot clearly are not. But again that is bad planning on the organisations part. Will continue.......
15/05/11 KT
3

People who stare at my autistic child