Calling customer services or a help desk these days seems to be getting increasingly frustrating. It used to be the case that it was just a real pain because you were transferred from pillar to post and left hanging on for some time.  These days however we have the added difficulty in that the person on the other end of the line may be difficult to understand because of their strong accent.

So many companies have outsourced their call centres to India now and we were of course given assurance that the quality of service would be the same.  We were told that the young professionals in India were well trained and fluent in English and that the service they provide would be seamlessly integrated.

Well, I guess some of that is kind of true.  It was smooth all right.  If you blinked, you would have missed it.  We picked up the phone one day and instead of Manchester or Glasgow, we found that we had been routed through to a centre in Bangalore.

Okay, its true are skilled workers out there, and some of them do speak quite good English. However, my experience so far with Indian call centres hasnt been all that good.  On one occasion fairly recently, we had such difficulty understanding each other that we decided to communicate on MSN Messenger instead.  To be fair to the help desk operative, they did in fact solve the problem reasonably well, but I dont think that the average person ringing up their bank could be expected to do this. 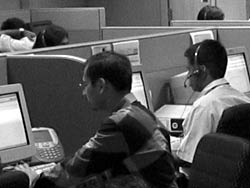 Some people naturally speak louder when they are on the phone, and sometimes if there is a bad signal they will often repeat what they have said several times.  Perhaps one of the main reason we resent people using a mobile in close proximity to us is because we only ever hear half the conversation.  It doesnt make sense.  We are naturally curious and like a puzzle with half the pieces missing we frustrated by being unable to see the complete picture. I completely understand why a company would want to outsource their customer service department to India.  Its about saving money.  We all want to save some money dont we?  The call centre employees have an average salary that is about one fifth of their UK equivalent.  You can save a whole lot of money just by using some cheap foreign labour and who cares about the jobs that have to go here in the UK?  Come to think of it, who cares about the customer suffering thanks to this, the latest bout of managerial stupidity?

We are a BPO Company in India, from Kolkata having 50 seater call centre with the state of art technology in the heart of the city of Kolkata, having highly experienced manpower to run any data generation project including surveys. We are specialised in Life Insurance Data generation and different Life Style Surveys according to the need of end client from UK. We assured 100% QA as per client and provide real time vox files for client's justification.

Please feel free for any further clarification and can start immediately any project as mentioned above.

We are an outsource company based in the Seychelles where we are geographically placed and ideal to take on your services.
with our 24/7 service with 100 seats offering outbound and inbound calls, telemarketing, Data entry, emergency service, Sales, e-commerce, email and diary management we can be a great asset for your company.

our staff are trilingual speaking French English and English and Italian widely spoken too.

Of course! coz they're so cheap and they can speak English too. How can you NOT outsource call centres to India?
27/06/13 Sandy
-5

I would just add that hefty import taxes should be put onto manufactured goods coming from places like China, to give an incentive for more manufacturing to be done in Britain again.
21/05/11 grumpyoldwoman
-19

I am looking for genuine client of Call center projects like Inbound/Outbound and other Non voice projects. We will outsource your projects in leading call center who have better technology and experience in market.
09/04/11 Rahul Parnar
3

I remember now. Well, at least I didn't say that the gerbil was deceased. Mr P is quite endearing when he thinks he is being savage.
13/03/11 Petra
-14

Petra Dennis Healy was verbally savaged by a politician named Geoffrey Howe, he described the experience as like being "savaged by a dead sheep" Bless him
13/03/11 Boblet
-10

Mike P, here we are again. All you had to do was not respond but, apparently, you enjoy it too much to do that.

If nationality is a "meaningless concept", why do you so frequently criticise the British? Why not just complain about the individual who irritated you that day without mentioning his or her nationality? Why focus on something meaningless?
13/03/11 Petra
-4

Hi Boblet, I am embarrassed to admit that the Healey joke has gone over my head. Are we talking about the ex Chancellor of the Exchequer?

The Weekly Gripe is just a bit of fun and a chance to let off steam isn’t it? Everyone has a right to their opinion but I have a right to disagree with it. It was the patronising “go away” that did it for me – I dislike being told what to do. Anytime he wants to stop, I am happy to as well. Otherwise I can keep this up for years, being well stocked up on Mrs Miggins’s finest.
13/03/11 Petra
-4

That was meant to read as :

Here's someone else for you to have a go at, another man who has dared to criticise Britain.
13/03/11 MikeP
-5

Here's someone else for you to have a go at, another man who has to criticise Britain.

"Burger King boss insults British women and food
The chief executive of Burger King has described British women as ugly and English food as “terrible”, in a gaffe likely to enrage his customers in this country."

Petra I am glad that you are not phased by mikep, bless him. You must feel like Dennis Healey. Withhold the turnips.
13/03/11 Boblet
-5

There's nothing wrong with my memory. I did not say I had a problem of recollection, I said that I required clarity on "how the place of birth of an oik in a call centre, or my own, have any bearing on this matter.” Not the same thing, so don't try to twist things, or maybe you have a problem of comprehension.

As for my own nationality, a matter with which you seem to be unhealthily obsessed, it's quite irrelevant as it's a meaningless concept.

Different answers apply to several of those questions. I could tell you, for example, what passport(s) I travel on, but that wouldn't necessarily give you the answer you seek.

Finally, if I were 100% British born and raised, of 100% British parentage, and had never left the country, I still have every right to criticise as vehemently as I wish any aspect of life in the country, call centre staff included. The fact that you find it objectionable really doesn't worry me.
13/03/11 MikeP
0

“ I am unclear how the place of birth of an oik in a call centre, or my own, have any bearing on this matter.”

Allow me to help out your failing memory.

You said, “I would prefer to deal with a call centre in India, South Africa or Eastern Europe rather than some of the UK ones employing the home grown cretins.”

I asked how you knew that the person you spoke to was not working in a foreign call centre. I later allowed that you may have been right in claiming that your bank’s call centre is UK based and asked how you could be certain that the “cretin” was not a foreign born worker who had lived here long enough to sound British.

As for the relevance of your nationality, I consider it a bit cowardly that you so frequently insult the British but give them no opportunity to reply in kind as you are so coy when it comes to revealing your own nationality.

That’s brought you up to date then.

BT took money when they shouldn't have