When nature calls you've got to go and there's no two ways about it.  Its one of the basic facts of life that a person needs to evacuate their bowels or urinate at least once a day, so I find it quite despicable when someone or some company tries to turn a quick profit whilst servicing this most basic human need.

Whilst on a bus journey from Blackpool to Birmingham recently the bus stopped at Manchester for 20 minutes.  So I thought this would be an ideal time to stretch my legs and use the services at the same time.  I really didn't like the idea of using the on board toilets as they're usually rather smelly and very cramped.

Also I didn't fancy the idea of trying to hover over the toilet seat whilst on the move and risk urinating down my leg!  If you've ever used a loo on a moving vehicle you'll know exactly what I'm talking about.

Surely it's every man and woman's right to have freely accessible toilet facilities? 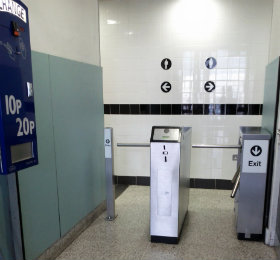 I eventually found the lavatory signs and proceeded towards them only to be greeted by barriers and a change machine.  I could not believe my eyes, you had to pay the princely sum of 30p just to take a leak!  Surely it's every man and woman's right to have freely accessible toilet facilities in a bus station especially as most people will have forked out for bus tickets?  Well on principal I did not use the services, besides I only actually had 25p in change and there was no way I was going to break up a 10 note.  I ended up having to hover over the toilet seat back on the bus.

To be fair they weren't quite as bad as I had expected.  I thought we were on a straight road when I went in, but as we turned a corner I got thrown around a bit.  If I had been a man trying to do this standing up I would have been all over the place.  Perhaps that explains the wet toilet roll, either that or someone had dunked it in the sink getting half of it wet.

Perhaps if you can present a bus ticket at these services you should be allowed to use their toilet free of charge, or alternatively go to the customer services desk, show them your ticket and they'll give you a token for the toilet.

It's a basic human right (as said) that in my view ought to be covered by costs raised in another way and I suspect in a lot cases are, for example, pay toilets at major London train terminals. It's not a luxury, it's a necessity and unfortunately there are times when you don't have time to fiddle for change or change notes up. In such cases it's in the general interest that you can access the loo without any hinderance. There is something deeply uncivilised about charging to use the toilet in my view; I know there is a cost associated with operating toilet facilities, but I would like to think these could be recovered through other, indirect means means like operating profit. I do feel for councils where costs have had to reduced and tough choices made. Donations would be better than pay to enter (this system is sometimes employed in France). At least in circumstances where the loo was needed in a hurry a donation could be made on exit.
17/10/16 Sprocket
1

I put a psot on a forum about this ages ago I am glad someone else has done it for some people they end up paying more than the barrier asks for I mean if you have no change the machines don't give change so you have to spend money at a overpriced shops so you end up spending more just to get the change. I agree it does go against human rights if your busting last thing you want to do in mess around getting change or messing with a machine
21/10/14 Mr H
0

I totally agree! This is one of the basic human rights! What is the point of charging people for going to public toilets while offering free asylum to someone from somewhere else in the world?
24/06/13 Nick
-2

I found as a young father that new (less than 10 years old) supermarkets, or large fast food restaurants have clean toilets; the former are often near the entrance. The worst ones are in stations or at seasides.
18/10/11 JackHammer
-21

I live in Mallorca and often get asked by holidaying Brits where the nearest public toilets are. Well, bars and restaurants in Spain and also supermarkets and petrol stations, (though not smaller shops) have to have toilets for use by their patrons by law, and the spanish use them as if they were public loos. Though it is only good manners if you are not a patron to either buy a drink, (even if to take away), or at least thank them for using the service and of course leave them in a state in which you would like to find them. Public toilets used to exist but like the british ones were often dirty and/or without paper of lights so they have largely disappeared.
19/06/11 Geliza
-11

Well, I think it's ok to pay for useing a toilet, which has to be cleaned etc. Hope you haven't peed your leg and did not made to much mess when hovering :D
29/05/11 Chiara
-18

I daily use National Express to journey to work from my home in Dorset to London, this is because it enables me to work while travelling and leaves the stress of driving to the coach driver. However the toilets on the coaches are often filthy, and stink, the toilets overflow on occasions, and complaints though answered, the problem not rectified. Given the possibility I would rather travel by train but this is too expensive.
17/05/11 Traveler
-15

JenWren, as you've obviously done all your calculations, maybe you could tell us all how much profit the owners of toilets actually make in a year, after paying for maintenance, cleaning and replacing consumables etc. Just interested.
07/05/11 Alf Red
2

And when you get to the 'loos, do you really think that some offer real value for money? I would place most public toilets in the UK, even those in seemingly expensive restaurants, pubs, clubs into Category Delta. There ought to be a Good 'Loo Guide.
05/05/11 Bad Loos.
-10

As an IBS sufferer I have been caught out a number of times and had to rely on the goodwill of others because I didn't have the required change to use the public toilet. I now make a point of carrying change in case I need to use a public loo. Public toilets should be open 24 hours a day, secure, clean and FREE!!!
05/05/11 thegrimreaper
-2

I wonder how many people decided to do their business outside after refusing to pay a bathroom fee.
05/05/11 Bobby
-4

Some free public toilets that you go in are absolutely disgusting to say the least; I even went in one where someone had left a pair of soiled undies; I was nearly sick. At least the barriers and cost help contribute towards clean and friendly toilets. These toilets usually have an attendant who looks after them and makes sure they are not used for 'other purposes'.
03/05/11 Dommy
-16

If I'm really desparate, I just pop into McD's or a local pub to go to the toilet. It's free and no-one cares if you use them and don't buy anything. My other advice to you is to not drink a lot before going out and always go to the loo at every opportunity you can, when shopping in department stores where it's free, even if you don't really need to go or could wait a while. Follow that advice and you never need to go into public loos again, whilst waiting for trains. Obviously, that only applies if you don't have kids with you or if you aren't likely to need to go in an emergency.
03/05/11 Grumpy xx
-14

While I understand your point, you have sort of answered your own question. Free public toilets are often 'cramped and smelly', the 30p (which sounds really cheap, it's at least a quid in London) pay for the care and maintenance of the facilities.
03/05/11 Timelord
-9