I'm sick and tired of 3 and their mobile broadband.  I began using the service a couple of years ago when it first started and it was pretty good, but when I did have issues I found them difficult to resolve with customer services.

I then had a break from it and started using it again at the beginning of last year.  It was much worse than when I had previously used it and things progressively got worse.  Customer services were just as difficult to deal with as they had been before.

Then it got to the point where I could only stay online for around 30 seconds before it disconnected.  3 informed me that my dongle was incompatible following a recent upgrade.  I bought a new dongle and the service was better, much better than it had been.  After a couple of months I decided to take out a contract.

The first 10 days were fine, then the problems started - heavy throttling which a software app called netmeter picks up.  Because of my previous experiences with 3, plus the hundreds and hundreds of other dissatisfied 3 customers who have made their thoughts known online, I couldn't help but think that 3 deliberately boost a new customer's speed, in order to lessen the chances of them cancelling.  Maybe that's not the case but subsequent research online has discovered that many other customers have witnessed this pattern too so it's all very strange.  Anyway, the service was terrible and once again, customer services too difficult to deal with.  It's a call centre in India and the staff are poorly trained and scripted so I now always deal with the Executive Office if possible. 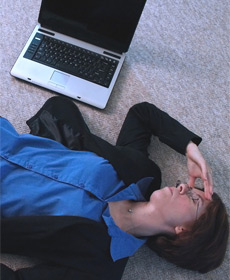 Service continued to be bad despite repeated assurances that it would improve.  I was given several dates from which I should have seen an improvement but never did.  Apart from the first month, August 2010, I haven't paid any monthly payments because it's been so bad, but when I have been speaking to 3 and been informed of a credit, nobody has seen to it that the billing department or system is made aware of this - 3 times I have been cut off because of unpaid bills, which should never have been billed.  In total, I had to call them 16 times - 7 the first time, 5 the second time and 4 the third time - to get these unnecessary issues resolved.

The Executive Office told me that 2 local masts would be upgraded in December.  They gave me a start date and said it would take a maximum of 2 weeks.  Service was appalling after customer services had confirmed that both were completed.  When I complain to 3, they seemed to boost my speed for anything between a few hours and a few days.  It becomes how it should be.  What nobody at 3 seems to comprehend is that I don't want it for a few hours here and a few days there.  I want it as much as possible and I don't want to have to keep asking for it.  Now, yet again it's playing up because it's being throttled so hard that too many people are chasing too little resources.  I have to constantly connect and disconnect, which means pulling the dongle out, plugging back in, waiting an age for it to scan and pick up a signal, then go again.  Each time I do this, I presumably push out someone else and when they reconnect, someone else loses out - all because our ISP has systematically failed to improve and cannot service its customers.

The internet is rife with horror stories regarding mobile broadband and it is my feeling that the ISPs use a business model of low price and high volume - stack 'em high and flog 'em cheap.  This business model is not conducive to good service; quite the opposite.  Oh, and when customer services are so difficult to deal with they should come with a health warning.

I have been with 3 mobile data for years. Every year it is getting worse. A couple of days ago in the middle of Edinburgh I could not even connect to pay for my car's parking online let alone getting g 5g! At home today I can hardly connect. The speed is so slow that it takes ages to even search for some simple matter. The company 3 must really reexamine their whole service infrastructure to find out why they cannot provide a reliable modern high quality Internet connection. I am now changing to gifgaf because my son is very pleased with the service with much much better connection than 3.
23/07 Sebastian
0

yep it seems most businesses have decided screw the customer and just give us the money. 3 is definately one of them. I live in Birmingham and the 4g mi-fi service across the city is getting slower almost daily. July 2022
10/07 bob west
0

Have been with 3 Homefi for many years and now have the latest modum for 4G.
Maximum signal strength but very poor speeds. Use to be 8mb/s down load but now lucky to get 1mb/s, different laptops Windows 10 and 8.1 give the same poor result
25/05 Avoid 3
0

Have been with 3 Homefi for many years and speeds were never less than 6Mb/s and often 10-12 Mb/s Now lucky to get 2Mb/s
Tested with differents Laptops and all gave the same low reading, all with the latest Huawei Homefi Broadband
Once a good service but now very poor
08/04 Avoid 3
0

Recently I brought 3 broadband first 2 days it was extremely good. but next day onwards suddenly net goes down and it is very bad condition only one signal light showing on screen what should I do now
21/03 Teja
0

Did the masts actually get upgraded in December? or were they telling you a Boris ?
I think the part about new customers getting go speed in the first couple of weeks is true. One of my relatives purchased a 3 broadband, it strangely slowed down after the 14 days try out period. Their solution is turn off & turn on again lol
21/01 SortItOut3
2

Aslo sick and tired of 3

January 2022.
I agree with 'Sick and tired of 3'. When I started uing the mobile broadband/hotspot unit my speeds were consitantly 6x the speed of my old home fixed broadband speeds! Over time the speeds have slowly but surely dropped. Customer service staff say it's a good signal in my area but reality is far lower. By 2022 my speed is between 64kbs and 650kbs...yes kbs! The Offcom service now lists my address as none for Voice and problematic for Data. Measuring the actual signal strength is now around 99% in the "Unusable" category and around 1% "Very Poor". Customer service by phone is a 'non starter'.
15/01 Aslo sick and tired of 3
2

I have the same issue using huawei b535 4g router 3 pro and i have 3 on contract pulling speeds of 2 mbs during day and around 15 at night so i have changed to unlinited on 02 and i am constantly now seeing speeds between 90 mbs and 140 mbs baring in mind the router was in the same place as when i had the three sim in it amd i really dont understand how 3 could treat its customers like this as the speeds on 3 are seriously bad they also ttied taking payments from my bank multiple times on dates that i did not set up with them for direct debit they tried 3 times in one month even though the bill was payed.
06/12 Dan
0

Took out 3 data sim unlimited a few months ago and it is very slow, I have also an O2 modem and it is 3 times at least as fast, even at the end of my allowance, this is disgraceful from 3.
04/12 smokey
3

Been using 3 for the past three years with now issue, but in the recent months it has been consistently slow, regardless of were I try to use it. Seems 3 is now oversubscribed.
10/10 Louis {Pie}
4

This is my just like experience with three! I even have a default on my credit file due to not being able to resolve an issue with their customer service people who never seemed to hear what I was saynig and only wanted to sell me more products, promising to sor my issue - I asked for this promise in writing and was told by three se[perate customer service people "dont worry - it is all noted in ytour account" only to find out that nothing was sorted and it was not noted in my account!" We have had endless issues with 3 and now my internet just does not work well at all. You can never get a good signal - we are in a city with what should be the best coverage, but we have really slow internet. Can often only connect one device at a time and are always losing signal and being cut of from whatever we have been doing - internet, tv, zoom - never works - not enough signal. I am sick of giving them money for dreadful customer service, weak signals and beimg treated badly when we have been paying them for years. I am moving back to Sky who at least have some decent routers and I think the broadband is better - they are all a bunch of highway robbers - take your money and run but "Three" takes the biscuit and all prices for worse service ever!!!
28/06/21 Kate
1

3 broadband speeds over wifi trying different laptops varies between 0.6 and 1.2 mb/s
This service is not good enough to even be called rubbish
Will consider paying off the remaining 1yr contract and finding a decent service elsewhere.
18/06/21 3 no speed service
2

Huawei B535 has max signal of 5 bars but broadband speeds are terrible, usually less than 3mb/s. Tested speeds on several different laptops (one at a time!) with the same result. About time OFCOM did a proper job and investigated 3 for such poor performance and this is in a Midlands town not out in the countriside.
10/06/21 Avoid 3
1

Used 3 'Home' broadband for many years, through 3g and now 4g.
Have tested download speed on several of my laptops so it cannot be a computer problem. Using the latest Huawei B310 with max 5bar signal strength.
Speeds are rubbish, at best around 6mb/s but usually 1-2mb/s.
Will definitely change supplier when contract ends. They used to be great.
10/06/21 Fed Up
3

No Internet connection, BT and ISP blame each other