I recently purchased mobile broadband from Vodafone to use with my laptop.  Their returns policy is 14 days and I guess it was my fault that I had assumed all would be well and I could just use their service when I was ready.  As soon as I started to use it I found that websites would take 10-15 minutes to load and then as soon as you clicked on a link it would take another 5 minutes to load or not load at all.  I am not good with computers so wouldn't have known where to start so thought it best to contact Vodafone customer services.

It often took a while to get through.  Twenty minutes was the average time and they were mostly foreign people.  So trying to speak to them on a mobile in a bad signal area with someone who has an accent was very hard work.  They were as helpful as they could be though.  After speaking to someone at Vodafone a number of times and trying out various things, they told me it was most likely a problem with my laptop and I would need to get an engineer to look at it.  I did this and if anything afterwards it was even slower with sites at times not loading at all! 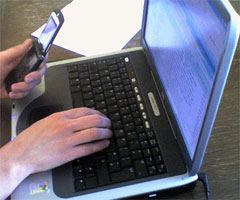 It was supposed to be a case of plug in and go...

I spoke to Vodafone again who finally determined I was having the problems due to the mobile signal where I lived and I would have to pay for a signal booster.  I was not happy about this at all as I was not told initially that the broadband could be affected by the mobile signal.  It was supposed to be a case of plug in and go.

In the end I had to tell them I was not paying for a service they could not provide and asked to cancel my mobile broadband 'service'. Cancelling wasn't exactly straightforward either.  It took me 3 calls and the best part of a month to cancel my contract.  The first time I phoned their systems were down so they couldn't help.  The next time I called they said they could offer a discount and that was it.  The last time I called I insisted on speaking to a manager.  I felt that my only way out was to tell a white lie so I told them I was due to work from home a couple of days a week and needed access to the Internet.  It seemed that was the only way I could get out of the 2 year contract I had signed up for.  I had a mobile phone attached to the contract, so when they cancelled the broadband they the also cancelled my phone so I had to get that reinstated.

Please be warned, if you are looking to purchase mobile broadband that you make sure the signal is sufficient in your area to support it.

Vodafone sneakily extends contracts beyond what is agreed. What was supposed to be 24 month contracts ended up as 26 months and 30 months even though I contacted Vodafone after 22 months and therefore over 30 days prior to the end of the agreed contracts. They do what they can to delay your termination and make it look your fault.
Vodafone joins BT as another business I don't wish to be a customer of ever again due to their money-grabbing attitudes.
12/07/16 Wreckomend
-1

I've just finished a pretty tempestuous conversation with Vodaphone - an excitable Irish guy who obviously has shares in the company for all he was prepared to shout at me to deny my claim.

I bought a dongle for my phone, and the service was terrible. So I went back to the shop and they sold me sure signal. The service was still terrible, but I moved house and with all the problems, the dongle and sure signal were forgotten. When I arrived at the new house neither worked. I complained and was given help, but the signal was slow, laborious and exasperated I asked my neighbour if I could use her wireless in exchange for walking her dog. Great. Till I let the house and moved into a flat in the grounds, where the neighbours signal didnt reach. I tried the dongle, it failed. I called Vodaphone and they sent a new sim card. Still didnt work. Tried the sure signal...boriiiiinnnggg! So I finally gave in and paid rotten old BT to put in broadband. Im fed up now because Vodaphone refuse to cancel the contract for equipment that doesn't work and never has worked. I cant cancel the DD or they will cancel my phone.

Invest in home broadband, same price, if cheaper, brilliant speeds even in the worst areas. We used to have Orange Mobile Broadband for £9.95 a month, but our speed in Furzton, Milton Keynes was only 0.125mb, now with the SAME PRICE Orange Home Broadband we get off peak speeds of 12mb (peak speeds of 9mb)! Plus, join BT and you can get wi-fi virtually EVERYWHERE they have a customer, with BT FON!
11/04/11 Stuart Westley
-9

That problem mentioned below by Harsh But Fair of communicating with 3 still exists today.

What is it with these people? Why are they so awful? When are UK customers going to witness proper regulation to weed out this type of company and consign them to where they belong?

Bargain basement without the bargain is spot on.

There is talk of 3 quitting the UK market - something CEO Kevin Russell said about inferior frequencies and if there isn't a change then 3 are done here.

Well, whatever that is, I hope for the benefit of the British public that 3 don't get what they want. If they don't and do indeed quit the UK market then I'd happily drive them to the airport if it means we're rid more quickly :)
09/01/11 iPost
-22

Vodafone are no angels, nor are Orange or o2.... but just be grateful you're not with 3 / Hutchison Telecom.

Now they really do make you want to bang your head against a wall.

Terrible company/network who just cannot be trusted with sales, billing, customer service promises and service quality. In other words - anything and everything. Two years ago the major gripe with 3 was that a customer would have to repeatedly make contact with 3 regarding network problems and would have to repeat all details everytime because nobody at 3 made a note of the conversation. This problem STILL occurs at 3. That's how awful they are and how they have systematically failed to improve. 3 is a bargain basement service (the cheapest) except there is no bargain, just headache after headache.
19/10/10 Harsh But Fair
-7

Vodafone are a disgrace, after no network at all for 2 months & several visits to shop to check out my laptop & issued me with a new dongle which made no difference I asked them to give me a credit for the months I had no serrvice. they totally ignored my request & continued to take payment out of my account leaving me only 1 option but to cancel my direct debt, OH BOY they soon responded then with letters of threat & debt collection agency telephone calls to my mobile which I did not give them & would like to know how they got that as my mobile is not with them. reported this to ofcom & now otelo why should this affect my credit rating. Has any one had the same problems & what was the outcome
13/07/10 Eno
-9

Well that really is bad news for you and I don't want to seem a smart alec but the company I use lets you try the 'dongle' first and if you can't get a signal and return it within 14 days they will refund your money and you are not in any contract from day 1.How cool is that!
I use the Utility Warehouse Discount Club/F87143 you may nor have heard of it but it IS a major plc company based in the UK in London.
Hope this helps
bestbillsaver.co.uk
22/05/10 bestbillsaver.co.uk
-10

vodafone provide piss poor customer service and their staff in the shops miss sell mobile broadband making claims that are not true.
20/05/10 Marc
-13

Yes that sounds like my own experience with Vodafone.Mine started when I agreed to take out a new 2 year contract with them.The issued me with a new USB 'dongle'.Getting the device's software installed on my laptop was a nightmare and when it finally was the thing would not work in my location.
As the local shop is only a few miles away I kept making myself a nuisance until they sorted it and reinstalled the old software.
What concerned me also was the lack of customer care and apparent the indiffrent, casual attitude from the staff.
27/03/10 Edwin 5
-15

Bulgaria has a better broaband than Britain and that`s suposed to be a poor country - if you look at the ratings Bulgaria is far in front of Britain - what a sad country this is.
25/03/10 bridlington1
-19

Personally I'd have thought that you aren't legally obliged to pay for a service you are not receiving and that any sensible judge would throw this case out. Seek some legal advice and hit them hard where it hurts. Nothing worse than corporate bullying!
24/12/09 AOD
-16

I have just received a warning of court action from a company called Adams Phones as Imoved house and can get no signal there. They insist I have to pay until the end of the contract (9 months more) even though I cannot use the service.
24/12/09 Jan
-13

I have had similar problem with Vodafone, cut a very, very long story short. After 20 calls (exactly) I have given up and they still wont cancel my broadband contract after I took it back within 7 days (no signal)... that was 6 months ago and they have just threatened me with a default notice. I have now taken this up with ofcom and they are dealing with this for me but in the mean time I have a nice default on my credit report for no reason at all. Customer services at vodafone enjoy playing ping pong with you... they just like to keep brushing you off to other departments and 1 girl even shouted at me as I said please dont put me through to another person as you are the 6th person ive been passed over too, and she then put the phone down on me... they are absolutely outrageously, terribly bad at customer services!!!! STAY AWAY!!!
25/11/09 VFone-PingPong-Games
-10