Everybody in the country has a reasonable choice of broadband providers except us in Hull.  Kingston Communications has a monopoly here and I have to say that I havent been too impressed so far.  Why can't the regulator force them to open up to the competition in this area?

We should be able to choose a different broadband provider if we are not happy with the service.  Apparently its not even illegal that we dont have a choice of land line or ISP and personally I reckon that it should be!  The current situation and in particular the lack of choice cant be good for Hull or potential customers.  I only use a dialup connection at home as I refuse to pay Kingston Communications for broadband.  Im not sure I believe their claims as far as pricing is concerned either. 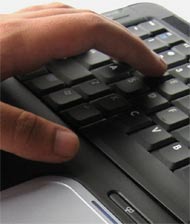 For example not so long ago we were told that all prices for domestic phone lines where coming down, well my bill went from 20 per quarter to 40 per quarter!  I cant vouch for other customers though, but I'll stick with my dialup for now.

I suspect that Im not the only one thats fed up.  I reckon if we had a choice of ISPs then the competition would force Kingston Communications to improve.  They would have to or they would lose all their customers and go bust.

Ive actually heard of people moving out of Hull purely because they're not happy with the broadband here.  The day we get BT in Hull (more expensive or not) I think Ill be having a party!

This is what their service is like most days (yesterday 25kb ive even had bytes and thats below dial up speeds) this test was taken after an engineer came out and apparently fixed my connection wich he showed me on HIS LAPTOP ,heres atip get them to do the speed test on your pc not theirs.

They say no more buffering this is a lie ,it took 40minutes to watch a 10 minute Youtube video

connexin are a joke i was promised no less then 10mbps download and same with the upload i am lucky to get 4 on each i am sick and tired of calling them to sort it out and getting fobbed off, i was with KC yes they are a rip off too but i wish i never switched now with connexin some days i cannot connect to the internet at all, the instalation was £160 and i pay £35 a month for this terrible service.
31/08/14 orion
0

Just to reply to Hullensian

First other places within the UK did have their own telephone company's however for reasons unknown to me these where absorbed into the post office and later became BT, where as in Hull this did not happen.

Is probably correct but I must say your narrow-mindedness is showing with your comment:

It's a fact competition does help keep prices down and help the customer to get a better service.

BT are probably one of the most expensive providers, however there service is fantastic, I have also used TalkTalk and Sky who also offer good prices but there service is not quit up to the same standards as BT.

I'm not saying KC offer a bad service, but what I am saying is that whilst the people of Hull can only use KC there is no reason for KC to improve their service costly as it is or bring down there prices.

And why shouldn't the people of Hull be given a choice as the rest of the country is?

The only thing that appears from an outsider's point of view to be standing in the way of progress is KC as the rest of the country do have a choice and don't have KC.
25/08/14 AS
0

I think your right about their prices and don’t understand myself why KC has a monopoly in Hull.
I always believed this was not allowed.
If more people refused to pay there prices and even just for a number of months moved over to say mobile broadband it may hit KC where it hurts as they hit everyone else.
Why don’t other providers move into Hull?
Is this because KC won’t rent lines to theme?
I have to say if we could all stick together something may get done about this, until we do nothing will happen.
25/08/14 AS
0

I have cancelled my kc internet and phone line have moved to connexin great speed up to now and cheaper.
17/08/14 Djwwild
0

i have been with kc for a couple of years. the last seven months i have had to ring up at least every week due to poor download speed and constant disconnections sometimes several times an hour. why dont i switch to a differant provider you ask well the answer is there isnt another provider. so i am stuck with kc. if they provided a good service maybe the people of hull wouldnt moan about having a better choice. in some areas kc are a dreadful service and unwilling to spend the money to improve. we are stuck with a very expensive but very poor service.
29/05/14 tracey rogers
0

I would love to have a choice of broadband provider, k.c have no incentives what so ever to provide a good customer service. If another company did ever come in and k.c did go bust...well...it says it all really doesn't it!!! company's don't go bust because there good!!! I am tired of the ridiculous bills and its not because of all the calls I make because i hardly use it, its the vat they charge on top of each call and the calls that don't connect still get charged. Â£26 I got charged for un-answered calls! even if this is the case, why don't they tell you this when u sign up. (same with most company's I know) but its kc im with not other company's. I could write a list of all the things i'm fed up with kc for, but instead I decided to stop moaning and leave them for good. I rang them today and cancelled, its the best thing I have ever done and another good thing is that there are other options out there. I have been looking about the net and there is a thing now called mifi which is broadband without a landline in hull, also there is a company called hull broadband that is similar and from a postcode check it also says I can get broadband and phone line with virgin and sky but its not certain yet, going to ring them. if I find anything else out I will update this site. good luck to all and I do hope one day other options are a available for us here in hull.
22/04/14 cindyb
0

Can we once and for all put this myth to bed that KC are keeping other firms out of Hull. Hull is a special case since when the phone was invented and the government of the day asked if any local councils wanted to run their own phone company, Kingston upon Hull was, as far as I know, the only council on the UK mainland that thought they should have their own phone system and that proved to be a huge success as the council ploughed "profits" (even though anyone could talk on the local phone network for as long as they wanted for 5p!!) back into the phone system and the network.

Hull people MUST realise the reason they can't get services from companies who use the old BT network in the rest of the UK is because these companies don't want their business enough ... i.e. they don't think they make enough money providing a special solution just for the few customers they MAY get if they set up a special deal with KC and, to be honest, I still don't "get" what anyone in Hull is going to get from another provider they can't get from KC. I'm on KC's cheapest broadband and landline package and it suits me fine. I do my ebaying, look a bit at YouTube, send photos, email scans and the speed's at least as good I have experienced elsewhere.

Apart from that, as far as I know, KC did come top in a test of ISP speeds with Beverley being the place in the UK you should live is you needed really fast connection speeds. I'm VERY proud of KC, what it's done for Hull over the years would rather my money went to a LOCAL listed company with many LOCAL shareholders than other companies creaming off profits to give as dividends to people who will never spend any money in Hull.
17/07/13 Hullensian
-15

K'Comm's have started outsourcing some management to the BT Group PLC. I shouldn't have thought it would be too long before you see BT in your area.
29/04/13 Cableguy
0

Has anyone can give a feedback of Sure broadband. As I've moved to Hull - HU9 and looking for an alternative to have internet.
Please I appreciate your inputs about their services and signal in this area.
15/08/12 TP2012
2

It's not illegal because technically KC are doing nothing wrong. KC are not stopping other providers from entering Hull, the providers don't want to come to Hull because we have a different infrastructure, so it wouldn't benefit any provider to alter their setups just to suit the "small" amount of customers that they'd gain.
20/06/12 Mark S
-15

I was with KC for calls & internet ( because its all we can have) for 4 years until one day I had one of those "stroke of genius" moments, sick of poor broadband speeds and rip off phone bills, I kicked them into touch and got 3 mobile broadband & phone which is much quicker and cheaper. Best thing I've done !!
18/06/12 Robertybob
1

Problems with BT phone and broadband