The car insurance industry really is a protection racket, with motorists the victims of a system that encourages all manner of problems.  My gripe is regarding the very recent experiences my wife suffered and the repercussion when renewing my car insurance this week.

First, some background details.  I have had twenty years of incident free driving; am in my late 30s and own a small ten year old 1.1L car.  My wife is 30, owned a small twelve year old 1.1L car and again never had any incidents.  Neither of us have had tickets for anything.

Two months ago, my wife was volunteering at a local animal sanctuary, with her car in a lay-by on a quiet country lane.  When she and her friend returned to the car, they witnessed an elderly chap fall off his bike, hitting the ground and splitting his skull open.  (No helmet of course!) My wife and her friend, doing the right thing, went to assist him, called an ambulance and tended him as best they could (without moving him to avoid further injuries).  After fifteen minutes an ambulance arrived.  One paramedic jumped out, then tended to the casualty.  The other turned the ambulance around, promptly reversing it into my wife's car.  My wife had tried to warn the driver: he looked at her, and then carried on, until he shunted her little car back by six foot, bashing in the front end.  The two ambulance crew loaded the casualty, but tried to drive off without passing on any insurance details.  The driver tried to deliberately write down the details wrong: the registration plate, my wife's name and insurer.  OK they were on a 999 call.  But the law states that they still had to acknowledge a road traffic collision.  The driver deliberately didn't log the collision with his employers either, we found out later. 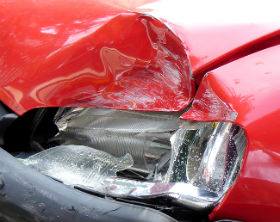 So my wife has to report to her insurer.  It turns out the names the ambulance driver and the paramedic gave were false (both had removed their ID badges).  The NHS is still denying the collision ever took place, despite the very obvious damage to the ramp and the vehicle's paintwork.  The Police?  Ha, they were an utter joke!  My wife has asked them to investigate, as the ambulance driver didn't provide the correct details.  The police response?  "Don't waste our time!"

The insurer took away the wrecked little car, then eventually, a week later, declared it a write-off.  Then they sent a cheque for the vehicle.  My wife purchased a newer, little car and is astonished to find her insurance premium has gone down, and as she is not at fault her no-claims is protected.  But only if she stays with her current insurer for the next five years.  The insurer's claims company is still pursuing the NHS for the correct details and to recover the money they paid out.

my premiums have gone up by £70! Despite the fact that she is not at fault

As for me?  My car insurance had to be renewed last week, and because my wife has made a claim, and is named on my policy, my premiums have gone up by £70!  Despite the fact that she is not at fault, it still affects my policy and premiums and will do so for the next five years.  Why is this exactly?  My wife didn't hit the ambulance or wreck the car herself.  She wasn't even in it, yet the insurance industry, the robbers that they are have determined she is now a'higher risk' on somebody else's policy but not her own.  Is there any logical reason for this, or is it just yet another excuse to take money?  And what if I hadn't declared the collision?  Oh, my insurer could claim that I am acting illegally.

Oh, and by the way, the NHS is still denying that the collision ever took place.  This is despite the animal sanctuary CCTV footage showing the collision in glorious detail with the car, the ambulance, the injured cyclist and the two ambulance crew very clearly with time and date.  In seems that in the UK with the NHS, no good deed goes unpunished!

Insurance companies seem to have a problem recognising their own website options. On every policy I have held for the last five years, I have been able to login to a website to clarify or amend details. On these sites have been various options about being contacted by that company, such as by email, letter, phone or text. I always tick the options to be left alone.
Swinton seemed to be totally ignorant of my requests. During the one (and only) year I used them, I had a phone call every month, an email once a week and an sms weekly. Despite me phoning them, rechecking the options on the website and threatening to never renew with Swinton, they still mithered me. And phone calls came at really annoying times. So I did what I threatened to do: I used another company for the next year. But that didn&#39;t stop Swinton phoning and texting, asking why I was not using them! Can&#39;t they take a hint. Leave me alone!!!!
And to really annoy us, Sheila&#39;s Wheels, who are the insurers of my wife&#39;s car, have also started doing the same things, calling, texting and emailing, despite the preferences saved on the website and said to them when the policy was taken out. Do they want us to use someone else?
09/09/13 Freeminder
-2

Swinton is a complete joke. I phoned today to cancel a motorcycle policy that doesnt even start for another 3 days. I thought i was being good by setting it up a week ago. They took the money out of my account straight away a week and a half before the policy was due to start. Now they tell me i have to pay £50......the whole year cover was only £78!!! £50 for a policy that was not even active !!!

Saga told me their renewal quote is the lowest possible, if I found a cheaper one they would beat it. I found RAC to be about half the premium. What should I do? Love Saga? This is an attempt by them to scam an older person.
27/02/13 Peter Spurges com
-6

Your insurance increased because there is an unresolved claim on the insurance at your address, it's not right, but it is standard practice.
The root of your problem is with the NHS Ambulance service, my guess is that you aren't talking to the right people. I can understand, though it's not right, why the crew gave you fals details, as they stand to lose their jobs, indeed not wearing name badges in public is often a sackable offence in itself. If you have the ambulance's number ad the video, I can't see the problem the NHS has, though in my experience (I have worked for the NHS since the 70s) ambulance services are a law unto themselves.
Sort out the claim and your premium should drop back to normal.
11/10/12 Timelord
-2

Insurance companies have been a rip-off for a while now conpounded by the case of my father-in-law who has paid approx £300 per year for his insurance for the past few years.

Tis years quote? £740!!! the reason being he turned 80 and the insurance companies justification for the rise is that over 80's are more liable to have an accident!? Also even if you don't have an accident in the following years your insurance is unllikely to ever come down as premiums are now based on categories rather than driving ability.

Small wonder that they can afford to have tv adverts on at every ad break coz it's our money that is funding it.
11/10/12 Fesantplucka
4

Nothing surprises me with the NHS - I've had nothing but lies from them when dealing with them.

As for your insurance premium going up, I would invoice the NHS for the increase and tell them you are going to sue them - leaving the scene of an accident without providing details, hit and run, providing fraudent information, etc, etc, etc.
11/10/12 Sue them
7

I have to agree, daylight robbery. We have a "comparison company" that hands out bloody meerkats that, check me out, is owned by Budget Insurance of Peterborough who through its multi-various affinity companies control a huge slice of the market. So where does competition come into it!
11/10/12 masser
0

Sadly exactly what one would expect these days in our country. NHS automaticaly lies about all and nothing. Police aren't there to help the innocent anymore and are astounded when someone asks for help that doesn't involve racing around with sirens on.
As for insurance companies - a licence to print money and behave like Dick Turpin. Name and shame your only comback I am sorry to say.
11/10/12 Fedup
-4

Woah I'm shocked at the NHS and police!!!

however, I had a non-fault accident in 2009 and had this exact argument about my premiums and the insurance company said that even though it wasn't my fault and I'd claimed, if you've claimed once you're more than likely to claim again thus your premiums increasing.

Car insurance is far too expensive so shop around