GP receptionists, I really can't stand them. They're all old, power-hungry female battle-axes that seem to delight in being over bureaucratic, inefficient power mongers. For example:

(1) Two years ago I developed hypothyroidism (under active thyroid gland) a chronic condition requiring lifelong medication. The symptoms are forgetfulness, tiredness and profuse sweating that disappear once your TSH levels are in the normal range. When I went to pick up my first prescription I got treated appallingly. I felt tired, frustrated, soaked in sweat and, unfortunately, lost my temper with the receptionist when she hadn't processed my prescription. But did she understand? Did she heck. I just got banned from the surgery and forced to change doctors. Their excuse? A zero tolerance policy for 'abusing' staff. I wouldn't have minded if I had threatening or assaulted this receptionist but this incident wasn't even close!

It was unprofessional beyond belief...

(2) A blood test at a health centre. In reception the battle-axe that booked me in, after ignoring me on arrival whilst continuing to chat to her friend, treated me, and other patients to 10 minutes of lively 'entertainment' listening to her on the phone, shrieking and guffawing at the top of her voice with laughter. It was unprofessional beyond belief and all patients (one holding her head in pain) just gave each other disapproving glances. 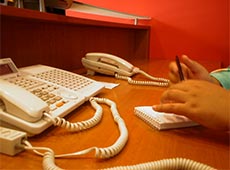 (3) My new surgery booked me for a blood test by phone. Arrived on the due date and was told to wait in the blood test reception. I did - for an hour. When the nurse never called me in I returned to main reception and the same receptionist dismissively told me that they don't do blood tests on Tuesdays. I told them I had got my dates right, but she didn't believe me. No apology, no explanation about why she'd checked her computer, saw my name and told me to wait in the first place. Just a surly PC attitude that suggested that I'd put her out for daring to question her on her incompetence.

So, there you go - GP receptionists, I detest them.

Not on your own. The treatment I had on Saturday past. Waited in queue outside for 3rd vivid. Told her I had no paper invite that I had been texted. Her scorn was awful. Then she proceeded to tell me that I would have something to worry about if I had the problem of the man she was booking in just in front of me. He was using a wheelie aid. I informed her that I to had one but it was to heavy for a bus and to heavy for a taxi boot. I also told her I was walking on a fracture. Again I was scorned this time also by patient who she compared my luck to and a battle axe of someone behind me. I have written to the line manager and the gp. How dare she. I was in pain but still had taxied to the surgery. I will not let this matter go. I consider her a worthless addition to the surgery. They need retrained or fired.
07/11 Cross 75 Yr old
0

Hi, You are so right,I have left my Doctor because of the reception staff, we the staff and I always manage to have a shouting match, result she put the phone down on me.
31/08 Roy B
0

If you want to give the receptionists some grief, request a copy of your records, they often don't know your legal entitlementvto a copy, check out the privacy legislation in your country/state. If they refuse you can complain to the statutory body that deals with privacy complaints. If you feel the records are inaccurate you can request a correction or to have your comments alongside their notes. Always write concisely and professionally. Never give them anything they can use against you. Always be polite and calm to make it hard for them.
You can write a letter written to the owner/Principal of the practice informing him of his staffs behaviour. You have to write a letter to bypass the receptionists who act as gatekeepers between emails and phone calls to practice managers or owners.
Also leave a bad review that is your true opinion and experience. Other people probably have the same experience and your review will assure them that they aren't the problem it is in fact the staff at the clinic.
If any doctor is horrible to you, complain to the statutory body, nothing might happen, but the next time that dr gets a complaint it might be taken more seriously when a pattern of the doctors behaviour is established.
I think in the future all these nasty, arrogant doctors, nurses, receptionists will be replaced with robots. A robot can scan the data more thoroughly based on pathology results. Maybe a nurse could do the physical checks.
23/07 Another one
0

It's worldwide like this. And receptionists of all ages. It's a power trip. They have a tiny bit of power so they use it to deal with their crappy job. I hate waiting in the waiting room for my appointment around sick people, imagine being there all day.
23/07 Romy
2

Also it isn't only receptionists these days , too many NHS staff talk down to people and treat patients as idiots it seems that a few wonderful nurses are holding the whole NHS together
14/06 Steve
0

I've just changed my doctor's as the previous receptionists were extremely rude and aggressive and extremely unhelpful. I found that I didn't want to ask for repeat prescription or appointments.
14/06 Steve
0

My GP practice has just amalgamated and become part of a larger "more efficient" group.
The receptionists in the old practice were very nice. Never superior, usually patient. However, the new lot must have passed NHS degree in nastiness. I finish the telephone call after trying to get contact with one of these moder mythical doctors, filled with anger. I am a retired professional person and object to being spoken down to. I really shouldn't have to discuss my problems with an unqualified telephone answered. The NHS IS REALLY SLIDING DOWN THE SLIPPERY SLOPE TO PRIVATISATION!
Do we really want to ape the USA? If you don't have money then just move on and die, you are blocking the way for those who can pay.
27/01/21 Pete
1

They've found that the one small pleasure they get out of their job is not by doing it properly and having the responsibility of helping people get healthcare they urgently need) - but by that little bit of power of implying "I'm going to make you the patient jump through hoops, and we'll see if you get your care when I'm done". That one bit of delicious power they get because of the fact that the patient needs help more than the practice needs them - they never want you to forget that fact.

Plus they think they'll get away with it. Then they wonder why the antipathy: total mystery to them :) This page isn't big enough to contain the crap I put up with just taking my son to one single appointment, let alone my own encounters with them..
13/11/20 RogetsThesaurus
6

A Receptionist job is most difficult especially in the present climate, it’s the doctors who dictate the rules of the practise the receptionist are bound by these rules. Phones ring non stop, patients believe it’s their devine right to see a doctor at a whim which is impossible. Most patients are very understanding it’s the ones who complain on Social Media that make a receptionist’s job very difficult they actually believe they should be given priority and only they matter, they are utterly selfish and make a receptionist very stressful. Receptionist don’t make the rules Doctors do, complain to the doctor they make the rules.
11/11/20 MaggieMae
-1

I am a Receptionist in a GP surgery. I always teat patients with respect as my philosophy us "treat others the way you would like them to treat you". Majority of patents are lovely.
Some other patients though are not prepared to wait, Drs run over cos when a patient is in a consultation they may need along chat and they cant be rushed. You are dealing with human beings so it's very hard to get itr
Right.
18/08/18 Lucy
-1

After having my own experience with rude medical reception, I was indeed also noticing a good number of them (because of other similar experiences at other medical clinics) are very rude and condescending and often not very helpful or sympathetic, I started searching online for this matter, and it seems that many people are experiencing the same stuff.
I don't know why those people are the way they are. I assume it's because they're pathetic angry assholes, but also that they have a stressful life and job. Unlike decent people who have difficult lives, but still act respectfully, these receptionist are the kind of lowlifes that take out their misery on others.
However what you mentioned here: "I just got banned from the surgery and forced to change doctors. Their excuse? A zero tolerance policy for 'abusing' staff."
Gave me a possible clue as to why they act the way they do.

You see.. apart from being miserable and pathetic sack of shits, many of these receptionists have worked in their field long enough to know what kind of crap they can get away with.
They're schemers. They treat you like shit, and when you get mad and lose your temper, they act like victims and ban you using their "no abuse policy" as a means to protect themselves even though they were the ones who instigated the problem. Nothing but scheming scumbags who hide behind their policy to excuse their rude behaviour and blame the patients if you overreact in anger.
29/03/18 John
6

you should come in Seahouses...she came all the way out her office try to have a fight with me...the Surgery manager try to blame 50% of what happen to me lol ,clearly they cant afford to lose such a wonderful woman!
20/11/16 youknowwho
2

For what it's worth, American GP receptionist are also, more often than not, utterly useless.
24/11/15 Axel
3