I started a new job this week and like a good little new boy I attended my first day dressed in the usual business attire consisting of trousers, shoes, shirt and tie.  Most places expect suits for interview, but generally either the suite or other formal business wear is usually expected on the first day.

The company I now work for are a fairly corporate outfit with a nice new plush office building.  At my interview I observed several women who work there going upstairs to their place of work and they were wearing semi-casual clothes, whilst the clothes they weren't wearing weren't scruffy they weren't too formal.  This is something else that irks me somewhat.  The dress code for women usually seems to be a lot less clearly defined than for a man.  Anyway, at the interview I wore a suit and my interviewers had either jackets, shirt and tie or suits.  With this in mind, when I was offered the job I naturally started the week off on the right foot and as you would expect decided to play it by ear and see what the dress code was.  You can always dress down but it's harder to dress up as they say!

There was no rule that said shirts must be tucked in.

My first day was really one long induction and part of that involved going through the company policies and procedures.  Dress code was mentioned and the HR lady spent a brief period of time clarifying exactly what that meant.  She specifically said "No ripped jeans or t-shirts with slogans." She said, "You don't have to wear a suit and tie; some people wear ties and some don't, you can wear whatever is comfortable really".  There was no rule that said shirts must be tucked in.

I wore shirt, tie and trousers for the first few days.  My intention was to alternate with wearing a tie some days and not on others.  As there was no specific dress-down Friday policy I figured that shirt and trousers were an absolute minimum.  I have worked for companies before that have a 'business casual' dress code, which basically means shirt and trousers.  Even then I would sometimes wear a tie as the mood took me.  In my previous job they had a dress down Friday and the rest of the week it was business casual.  Most people didn't wear ties, some had shirts tucked in and some didn't.

All had been going well this week up until the point where I had a meeting with my immediate line manager, who I still think is a really nice chap and to be honest I don't hold a grudge against him.

We had an informal chat about work over a cup of tea and just as we were drawing the meeting to a close he told me that whilst I was not breaking the company dress code, the managing director and chairman are quite the 'hands on' type and that they could pop into the office at any time.  He then made me aware of my sin...  I was wearing a shirt that day which wasn't tucked into my trousers!

As I said, I don't blame him because I suspect the message came down from the the Head of IT who is the director's right hand man.  I think my boss was told to have a word in my ear about my shirt and whilst I hadn't actually noticed anyone else wearing their shirt that way, I didn't think it was an issue.  I still looked smart enough in shirt and trousers...  or so I thought! 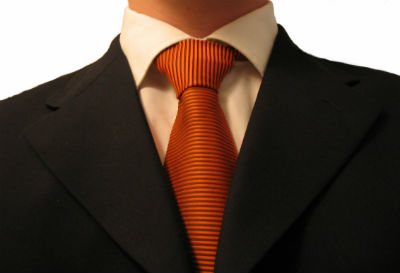 There was a time once when no office worker would go to work without wearing a tie and progressive companies change with the time and relax the dress code a little.  I should have guessed that being in such a corporate environment they may be a bit behind the times.

It bothers me though that companies have a 'dress code', and yet don't clearly explain the rules.  Wearing shirt and trousers with the shirt (straight bottom, not curvy) not tucked in is quite common these days, in fact I feel quite self-conscious with it tucked in.  If they'd clearly defined their dress code from the start I wouldn't feel so resentful right now.  Come to think of it, my last job was the exact opposite.  My manager used to tease me on the days when I would wear a tie!

I suppose I'd better pull my socks up and tuck my shirt in though, after all at the end of the day it's a job and I'm one of the lucky ones to have one...  I suppose.  But what do you think?  Should it be in the dress code if shirts have to be worn tucked in?  Is an untucked shirt still a big no no in the office?

I am sure you don't need advice on your appearance. My advice for what it is worth is to conform - just as if you were in the army. Wear your shirt and tie, shine you shoes and polish up your manners. Be polite, helpful and professional at all times. There is no other route to success.
03/03/18 Phil
-3

'Slacks'? Why does this word for trousers always remind me of the 1950s and Enid Blyton novels?
29/12/12 miserablemoaninggit
2

In this day and age there appears to be scant regard for good tailoring in the office. Let me give you some examples: ill fitting slacks, not wearing smart slacks to work, black faded socks worn with flat shoes (pop socks please). Hems dragging along the ground, disgraceful faux pax. More choice and consumerism has led to an all round dumbing down of good taste. Men in senior postions not wearing a tie, ok for Match of the Day but not for the weekly mangement meeting. Brown shoes, Brown Shoes (arghh, no), never unpolished black shoes! Brown belt with black shoes, or even worse no belt. It is no coincidence that this country has lost its way at the same time time as this shabbiness has become the norm.
29/12/12 Suits you
2

perhaps if more men actually got a shirt that fitted from a made to measure shirtmaker they wouldn't feel the need to pull a shirt out of their trousers
23/12/12 www.lewistaylorshirts.com
2

Does it really matter? Alf red related tucked in shirts to tidy desks and more thoroughness at work, but this is not necessarily desirable. Tidy desks (and presumably tucked in shirts if we follow his logic) have often been related to conformism and lack of initiative; imagination is often lacking as is much ability to 'think outside the box'.

Yes, tuck in your shirt to show that you are a reliable plodder. Alternatively, if the rules allow then untuck your shirt at times, irrespective of what your boss says.

Alf red is correct when he says that 'One's manner of dress says a lot about the type of person they are.' But please do not equate this to 'smart is good' and 'not smart (untucked shirt) is bad'. It really can be quite the opposite. In fact, in my experience it very often is.
13/11/12 miserablemoaninggit
-5

@Ade. My comment was based on observations made over 40 years of working with and managing hundreds of colleagues. You will note that I did say "generally", because there are always exceptions and one of my staff who regularly delivered assignments of the highest standard, was also pretty scruffy and a great person too. We had no dress code, but I did observe that "generally", the presentation of the person, workspace and their work, were of a similar standard. No-one got criticised for under-dressing or over-dressing. Not an opinion or a criticism, just observations.
13/11/12 Alf Red
1

@Alf Red That's a very narrow minded view. You could argue that those who concentrate on their dress code aren't as focused on the job, whilst the 'casually dressed' ones are more focused on work.
11/11/12 Ade
1

I think it's a matter of how you see yourself as an employee of your organisation and how your manner of dress portrays you as a person. I found out that generally, people who dressed smartly at work were more thorough in most of the things they did, while the scruffy ones (we had no real dress code) tended to have untidy desks and their work was often on the shoddy side. One's manner of dress says a lot about the type person they are.
It's possible to dress down and still be smart.
10/11/12 Alf Red
2

What's the problem? You're a new guy and your boss quietly asked you to tuck your shirt in. Many rules have local adaptations and interpretations, why not just say "ok boss, message understood" and be happy that he's told you so others aren't mentioning it behind your back.
09/11/12 Fred
1

Timelord. I think provided that there are no skid-marks involved it is perfectly acceptable to wear your shirt un-tucked. But tread warily whilst skid-marks are acceptable in a rural office, they are unacceptable in a global one. Corporate or Cooperative.
06/11/12 anon
-6

I suspect, having read your gripe, that HR and IT just have different interpretations of the same 'dress code'. I don't know the organisation, but perhaps the HR department are more 'relaxed' (having worked with HR types, I would suspect this), but the IT management are possibly more 'old school'. It is not a critism of either, but just different views of the 'right' look. In reality this is not uncommon, in my past jobs we had departments, like sales, who have very tight dress-code, white shirts, suits and ties, others, like DP operations accept jeans and t-shirts, the latter being much more physical.

Personally, I might tuck my shirt in, certainly until you have been there a while. Starting a fuss and involving HR might be counterproductive and get you a bad name?
06/11/12 Timelord
-2

Tuck in or not

If you've worked in a corporate environment before I would suspect you would know it's not 'acceptable' to not have your shirt tucked in? Although I do understand what is acceptable to one person is not to another. As you say it used to be suits, shirts and ties and over the years this has gone down to just smart trousers, shirt and no tie. At our office (global corporate company), the dress code is 'smart', but no need to wear a tie (but certainly not jeans). Although nothing formally would be said to someone with their shirt not tucked in, there would be a lot of jokes made at that person!

To be honest, I'm not sure I would have not tucked my shirt in especially as you're the 'new boy'. I would have waited a couple of weeks to see what is acceptable and what's not.
06/11/12 Tuck in or not
10

Smart, casual or something in between?

Men who leave their shirt unbuttoned