Internet marketing companies, you can't help but wonder if they get their consultants from the same place double glazing companies do.  As soon as you get a website up and running they're hounding you with promises and lies in equal measure.

I had a run in recently with a certain Internet marketing company which I won't name and shame for obvious reasons, but needless to say I found their attitude quite distasteful and I didn't take up any of the services they offered.

I was approached through email and had a followup phone call with this company.  To be honest I should have been suspicious when I noticed the Google trademark plastered next to theirs on the email (Do Google allow this?).  Anyway, my gripe isn't with the services they offer.  I can sign up to Google AdWords myself for some advertising and that's basically what they were offering. 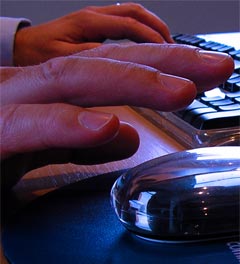 My point is, the fellow who contacted me was just a little bit too pushy.  These sales guys always want an instant decision and I was not about to go down that road so I stalled my decision for a few days.  I calmly explained that I don't do business that way and that I wanted to take on board some professional advice before making a decision.  I spoke to a friend who explained how things work and I made my mind up.

When the marketing "salesman" called back the next week, I explained that basically I had been told their way of doing things wasn't for me and had been advised not to proceed even though he supposedly held the offer open especially for me after talking to his supervisor.  I thanked him for the offer but said I wanted to politely decline and that I had to go as I was talking to him during work time.

He started ranting his SEO marketing sales patter again, even though I had said NO a few times, so I ended up hanging up on him.  He then tried to call me back on my mobile twice in quick succession, so I just rejected the call each time.  As if that wasn't enough I came home to the following answer phone message.

Without being rude, I thought I'd thank you for um... wasting my time.

I held allocations for you for a full week and now you say that um... Google does not work!

So you obviously know more than me, as a marketing expert and you think that Google does not work.  Um, you keep doing what you're doing there Chris...  live in your little small world of you know, Yell.com.

You know but thanks for wasting my time!"

Not very pleasant is it?  So it would seem that some employees just can't handle rejection or don't know how to take NO for an answer!  I believe that I had been very tactful and quite within my rights to consider a service offer before signing up.

Had a pushy marketing bloke phone last week and expected me to discuss my business banking with him ( he was not from my bank ) , when I said I would not he was really rude , they make me laugh when (Goo---) tell you they can get you on their first page for an advert , yes they probably can for a couple of days then the other 100 million have their turn !!! It is only logical that unless you are ready to part with thousands it is impossible.
28/11/09 Gian
-6

Annoyed: There are a lot of marketing companies out there getting desperate at the moment. I have noticed an increase in activity over the last few weeks even. Website marketing it would appear is a very competitive business and the economic downturn has only tightened the screws.
23/07/09 Ade
-3

Sounds like the same bu**er who just called me. He was pushy and extremely arrogant. He threw a few 'buzz words' (sic - when will these sods ever talk human?) at me and when I politely declined by saying that we manager our own AdWords account and are happy with the keywords that do show us on the first page, he said rudely 'You're not doing a good job then are you?" and the b*****d HUNG UP before I could give him several pieces of my mind as to his place on this earth!

Fortunately for him, he was calling from one of those lines that don't show the number on my caller ID (says 'private number')

It's quite easy: Just say you are not interested, say goodbye and put the phone down. Without waiting for a response. If they send e-mails, just delete.

It works every time and they soon get the message.

Martin, please post up your web address so I can get in touch. I can probably help you out there with some simple advice.
11/09/08 K
-11

My personal experience with website marketing companies hasn't been that great. I've forked out £58 each month for the last six months and have yet to see the fruits of my investment. As for appearing on Google, yes we're there but at the bottom of the third page of the search. What good is that and who is going to find us there?
19/08/08 Martin
-2

Its time the whole caboodle of cold calling, either at the door or telephone, was made illegal. I find now that the only way to get them to understand the word 'NO' is to be rude to them. They don't understand pleasantries! One caller conducting TV viewing interviews at the door, told me I had to answer some of his questions to prove he had called! I told him to go away - his response was that he would then have to call back again later, dare he try?
07/08/08 Ban Cold Callers Now Mr. Brown
1

Website marketing is fast becoming a cutthroat business just like many others. Suggest doing your homework (you've obviously got that covered) or perhaps doing your search marketing yourself, many business owners do these days and there's plenty of reference material available out there. Even the big search engines have tips and tutorials. Good luck with it Chris
06/08/08 Scott
-11

I too never make a decision on the spot, it's quite simply bad for business and usually bad for your pocket in the long run. If they can't understand that then they're definitely a company worth avoiding.
06/08/08 James
-9