We had some new double glazing fitted last year.  First of all we had the front windows upstairs and down fitted, then the following year we had the remaining windows out the back done.  This was quite a lot of work and it cost quite a few thousand pounds.

We're happy enough with the work that Amber Windows did (eventually), although there were a few issues.  The front window had a bit of a defect and hadn't been fitted properly, likewise the bedroom one needed some sealing replacing.  Then there was the dining room window that needed replacing due to a manufacturing problem.  There were scratches on it.  When you buy double glazing you don't expect it to come with blemishes.

Anyway, as I said the workmanship from double glazing fitters wasn't in question, and neither was the product itself once these problems were resolved.  The issue though, is nuisance phone calls I've had to put up with.  We've been receiving these calls from Amber Windows since just after they replaced all our double glazing. 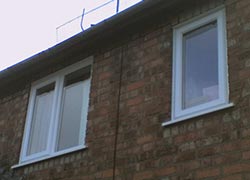 It's almost as if there's a note on our file that says 'Call this guy up once a week' because so far I've had two calls this month already!  Every time someone calls I go through the same speech.  "No we're not interested in getting any more work done", and "yes, we're happy with the windows that you fitted last time".  It's getting beyond the joke now though.  I'm fed up with it.

The first time they rang us up last year I had to endure the whole "As you've spent so much with us already, you're entitled to a significant discount... blah blah blah".  Anyway, to cut a long story short, I went round the houses with this guy for a few days and as it turns out there's not a significant enough discount so I asked them not to call us back and thought that would be the end of it.  Apparently not though, because we've received more than a dozen calls since.

This is getting tiresome and I'm fed up repeating myself and a 'note being made not to call us'.  They're just not listening, so if someone from the company reads this - please, don't call me any more!

By: No thank you!

we too are experiencing unwanted cold calls from amber windows. surely they can be stopped somehow without everyone having to change their numbers or disconnecting their phones 9feels like this is the only way to get rid of them!!)

dreadful company and dreadful customer services, it always seems to be a Birmingham number as well!!

Amber, Amber, Amber what can i say? you guys certainly win the award for doing peoples heads in. How can i trust a company to successfully install "the best it gets windows" when you repeatedly show you are not capable of a simple task such as taking my phone number off your system? Every time one of your guys call, i ask for my number to be removed and all i get is what i can explain it to be is a melt down. Have you ever stopped to think that by constant harassment you have forced me to never want your guys anywhere near my property and put me in a situation that where ever i go i can't help but to run you down as much as possible. Remember this is only down to the fact that you are incapable of removing a simple phone number.
Don't start me on the door to door cold calling! As other people have stated all signs are ignored. For the record, this post will be included in my "Amber windows harassment complaint" along with my video evidence of the manners their sales people bring to my door.
25/07/16 baden Amber
1

AMBER WINDOWS, stay clear of this company they won't let you go and they won't take no for an answer I had work done 10-15 years ago and they are still calling me! Every time they call I tell them not to and they say they will remove my name from their lists,they never do! I am also on TPS ,means nothing to them , I have now reported them to the information commissioner perhaps the forthcoming Â£500000 fines may stop them!
20/08/15 Fed Up
2

I was an employee for Amber windows so apologies now if i was once one of the people that called you asking if you wanted windows. But i will tell you now, you are not on a computer data base the sales operators are givens sheets of numbers with dialing codes up and they just go through them and then cross you off the piece of paper. The whole system is a joke to be honest and I am glad i am no longer employed by them. Even if you are with the TPS it doesn't make any different. Its not a good company to work for, the girls in the office don't even have the equipment they should have for the job there doing and glad i am out of there....
17/09/14 ambercrap
0

I had a similar problem with a different company. This worked for me just sent one to the company concerned and another to their local Trading Standards.

To Whom It May Concern,

The last call I received was on YYY and I have now decided that it is time to inform ZZZ Trading Standards of XXX's behaviour.

What confuses me about this company is why couldn't they leave you alone, rather than get on the other side of your mood or had you asked them to 'phone very many times close to the evening?

If so then aren't they guilty of the same 'harrassment' in that you didn't leave sufficient imformation?

And, I have not heard of any window company that does not feature a 'non call-back list' be it windows, doors or mirrors, this is a courtesy feature which allows the call centre to leave you alone, against the companies policy maybe in the event of a potential sale - you did not need to "get cross with the guy on the 'phone" at all but simply put the 'phone gently back until it disconnected.

Most commercial companys are wise, and leave ample time before call backs to get into the mind of the customer.
Hope this helps, Collar.
12/09/14 collar
0

I recently made the mistake of getting in touch with Amber Windows, first off the Sales guy was late, no apology,he seemed nice enough though. So when it came down to business he offered us 6 Windows and one Door for Â£6000, my partner and I looked at each other and thought 'what', anyway we let him carry on play around with his figures and he came down to Â£4500, but we wouldn't budge from Â£3000, so he said the door we had chosen was too expensive, so I asked him to change our door and he came down to Â£3200. At which point he thought great they are going to sign, I then said thank you but we still need to get other quotes, he then rang his manager to let him know what was going on, who I could hear on the phone and he was pretty rude saying why are we wasting their time and not had other quotes first. Perhaps the should put that on their website "Only call us if you want us to do your Windows". The salesman on one final bid said that if you sign with us and get the quote cheaper we will match that price. Again I said no, eventually he left. Nightmare.
11/09/14 JK
0

5yrs down the line & Amber are still pestering me to have conservatory done (already been done by someone else) even though I've told Amber this they still ring up at least once a month. I've spoke to the managing director who assured me that my number would be taken off the call list, that was 2 yrs ago & again today they ring. I've told them numerous times that if they carry on i'll report them for harrassment. I have also had calls from another window company who are partners with Amber, insisting they got my number as I had rang them for a quote "NO I DIDN'T). You will also find that they will not give a lady a quote unless husband/partner is there or unless your the sole owner of the property.
03/06/14 sam
0

Amber Windows staff are dishonest and liars. I just got cold called from 01213847360 and the lady pretended she was answering my recent enquiry. I could hear conversations in the background with other staff. She lied and lied again and when I challenged her she lied a bit more. This is a crap company and I recommend you NEVER do business with them.
Amber Windows, Birmingham = dishonest liars.
18/10/12 James
-2

Amber windows are really beginning to p*ss me off today. They've already been told to stop calling and yet they rung me up again today. To make it worse, an hour after I put the phone down one of their people knocked at the door. He looked puzzled when I was curt and shut the door on him.

When they ring just answer as normal but carry on with what your doing,their paying for the call,they will at some point realise that no ones listening.
09/07/10 arrawn
-6

Well, If you sit under a bulls ass, there is a slight chance you might get shat on :-S... You're whats known in the trade as a 'punter' ... i.e. you probably happily paid the company more than you could have, for work that they didnt actually earn ... thats why they keep comming back ...
26/03/10 Ivor Penn
0

I used to do this for a job, with zenith windows . Most of the numbers including x directory were supplied from banks and credit card companies. we used to go throught the oxfordshire phone book a - z every six weeks using sheets prepared including x directory numbers, all pre vetted as ccj free. shouting at the canvasser usually just increases the problem as the caller is unable to delete numbers from their call sheets..
17/01/10 Inquisitor
0

Fed up with Amber Windows

Amber Windows are beginning to seriously pi$$ me off now. That's twice they've called now within 24 hours, both times I've said, not interest, windows have been done thank you and don't call us again. Why won't they get the message?
01/09/09 Fed up with Amber Windows
-5

Why are you letting them obligate you into listening? You've made yourself clear, when you hear their voice, hang up the phone on them. Don't let them waste any more of your time...
19/07/09 Michelle
-3