I've been having some problems with my Virgin credit card recently and not sure where I stand.  The obvious thing to do would be to ring them but Ive just spent 45 minutes on hold to a national rate line before hanging up so thought I'd post my annoyance here!

It all started about 2 months when I lost my Virgin credit card.  I rang them to report the card lost and they said that they would cancel it for me.  Anyway, three weeks later I still had no replacement card so I rang them and discovered that the original card was still active!  The only saving grace was that it hadn't been used.

I ordered a new credit card and it arrived very quickly in the post.  I never even opened the letter as I knew what it was and dont generally take the card out unless I need it.  So around my normal credit card payment time I logged into my account like I always do and noticed that the balance was at zero and there was nothing to pay.  I assumed that the reason for this was that they had transferred the balance to the new card which would be on my account shortly.  It said on screen that that no payments were due so I thought nothing more of it.

A week later the same again, another week and another week.  As nice as it was not having to pay, I thought I best call them up to find out what was going on.  I type in my card number only to find that I have been hit with about £150 of late payment charges!  To make matters worse I couldn't get through to anyone to query these charges.  Stuck on hold, don't you just love it? 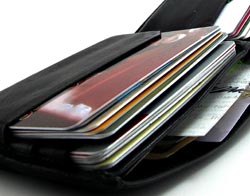 I wasn't aware that not only do I get issued a new credit card number, but I also have to set up a new account for the new card in order to view financial details!  Is it that unrealistic of me to assume that the old card details would get discarded and the new ones added to my existing online account?  I wouldn't have thought so.  So I thought I would try and set up the new card, typed in all the details and low and behold I received the dreaded message: 'Our servers are currently unavailable'.

I'm not quite sure what to do now.  I quite happily paid off my arrears for the month which I thought I was getting free but I am not happy about having to pay these charges!  Should I just accept the shafting as I knew that I should have made a payment a few weeks ago?  I am not aware of any letters being sent to the family home where the card is registered.

I have since found a free phone number which is a small consolation but I have better things to do than spending half an hour holding a telephone.  My credit card is now over its limit so I am concerned that I am going to keep getting hit my more charges until I conjure up almost £200!

I don't know how Richard Branson sleeps at night.  Probably quite well on his pillow stuffed with my 20 notes!

To add to my previous comments I well never ever buy or use any Virgin products again.

If more people did this perhaps smiley Branson might wake up.
14/06/18 robin
0

do what I did close the account and go to an ethical company evrything they did with me was designed to catch me out so they could charge me, the worst card I ever had.
14/06/18 robin
0

Richard Branson, I hope he reads this!! Your company is taking people who is trying to repay their debt to the clearners! Ive written to the FSO this morning, Im trying to repay the card back but with charges on charges its mission impossible. Its the biggest mistake I have ever made getting this card. I was agreed a "repayment" plan and now got a letter in the post after paying the agreed fee that they are taking me to the cleaners! What the hell?! Your staff don't give a damn, and apparently my lively hood is all based on a compute saying yes or no! Richard we have families and for those who are trying to repay our debt back give us a chance, instead of charging us charges on charges! We have families to feed, jobs to keep and to be honest not an island to maintain! Please have a word with yourself! i am disgusted your have the worst staff in the world.I hope you sleep easy at night. i don't right not because of it all!
15/08/13 Miss. hardworking and trustworthy!
2

My Credit card is not recognized by virgin account, despite having been used many times. This has been brought to the attention of the supervisors several times without any change. To save money and time I will stop all transactions with Virgin and let them suffer the loss of income..
04/04/12 D. Ashworth
2

Virgin is the only credit card I have had problems with. I closed my account with them but unfortunately they still let direct debits come out which I find ridiculous if the account is closed it should be closed as far as I'm concerned. A direct debit came out nevertheless!! I paid the whole amount off, the payment came out of my bank account on the day it was due and now I find they have charged me a late fee!! Wonderful!! I will never deal with virgin again as long as I live!!
06/06/11 Mrs.sickofcreditcards!!
-12

I got tempted back to Virgin Credit Card but I'm so sick of their system being so slow and I have had the same problems with the late charges and payments taking forever. Barclaycard has been fine for me and Halifax too. I did moan at Virgin but its too little to late, i'm not impressed and going elsewhere.
05/03/11 Nic
-11

My husband has had problems with Virgin. If you think you have a justifiable complaint do contact the Financial Ombudsman. Not enough folk air their complaints these days and that is why companies with unfair practices get away with so much to their detriment whilst companies like Virgin just continue to hike up their interest.
02/03/11 Grumpy Old Woman
-9

all these storys sound just like I am reading my own dealings with this card I had a £14,000 limit on my card with no missed payments I allways paid well over the required payment I have a very high credit rating they just cancelled my card with no warning they said they were being a responsable lender what would of happened if I had been abroad I could of been stranded this company should be closed down they have not even got a proper bank so you can pay in directly avoid
24/02/11 david
-19

I have same kind of problem, Once you got your virgin credit card and don't know how to set your online account, you will be pinched.. by their charge. Virgin will not send any card statement or they will not warn you about your due date.. The end result is you loos all your promotional offers.. What a shame on Virgin Money Customer Care..
06/01/11 Siju
-3

I have the same problem as your last writer - paid on tiime - came out of my bank account before my due date but was hit with a late payment and they cancelled my IFC facility. Have moved my balance to a more reputable provider and will do my upmost to make sure no one else is RIPPED OFF. Is this false advertising - 16month 0% balance transfer? I could go to the ombudsman but best to vote with feet (or money) and bad publicity!!!
22/12/10 Shelly Welly
5

yes I have had problems with my virgin credit card as well so your not alone,I have a MBNA as well which I found out is of the same as virgin,so when I made the two payments at my bank,the payments went to one account and virgin charged me 30.00 latepayment fee and my next payment shot up and I was charged more interest.I called them and they agreed and refunded my money but then they added interest on top again the next month and refused to take it off.
To be honest there a nightmare and I wish I never had to have the damn card and I am finding it hard to pay it off.I cannot wait to see the day branson empire collapes right on top of his fat head.
10/11/10 rambo
-8

Same happened to me - paid £150 odd for balance transfer and then set up standing order except I paid three days too early and they classed it as a late payment ...result two months later £50+ charges (inc interest) and THEY WILL NOT PUT BE BACK ON 0%. They do not want to know. I will never use virgin again.
24/09/10 Mike
-3

Would you please, please, please have a clear entry that says account payment direct. I spend at least half a hour each month trying to pay off my account and cannot get into it.
01/06/10 CHAS
-9

Why can't I make payments the easy way?