I read in the news today that Lloyds TSB are to introduce a £35 annual charge for customers who either use their credit card rarely or don't use it at all.  Is this some kind of sick joke or something?

Did they not report an 11% rise in pre-tax profits recently?  First we had those ridiculously high bank charges, then an end to free banking and now this latest example of pure greed!

Surely they're making enough money out of their customers already?  This is just one step too far and it looks to me as if they're out to punish the small minority of people in this country who would rather stay out of debt.

I have a credit card myself but I use it only on very rare occasions.  I got the card mainly for emergencies and those times when a credit card is absolutely necessary.  If I do use the card and it really isn't that often, I always pay the balance off immediately.  In actual fact my balance is in credit at the moment and they owe me money! 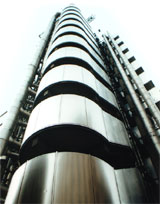 Customers who use their credit cards heavily and can't afford to pay off the balance each month may end up being stung by the interest charges.  That's their problem though and they can carry on donating to the already hugely inflated profits of the banks if they wish.  Personally though I would rather hang on to my hard earned cash and use it to more life fulfilling ends.

I'm really fed up with the way the big high street banks treat their customers.  To them we're nothing more than cash cows.  It's been said before, but I think it's very appropriate - at least Dick Turpin wore a mask before he robbed you, they just sit in their glass towers and dream up new ways to screw money out you.

afraid the truth is you are just costing them money having a open product which you do not use. There are still costs the bank pay such as issue statements or replacement cards and as you do use the card they do not make any money from you to cover the costs. Accept that £35 is a lot more than these costs they occur, but if makes you close the card and remove these costs then they have acheived what they wanted - making them selves more profitible !!!!
14/02/11 Unknown
-1

Credit cards are only for the brave I believe. Too easy to fall by the wayside and get into debt. Stick to debit cards and cash!
03/08/09 jacqui
-4

live life on the edge...but do

I agree its all too easy to apply for another card and run up debt but surely why not cut it up so that you cant use it anymore ?

People only have themselves to blame, If people havent got the mentality to realise that they are getting into debt thats their lookout, they cant then expect someone else to come along, wave a wand and make everything OK again.
04/03/07 live life on the edge...but do
-4

The Citizen's Advice Bureau reported an 11% rise in the number of people seeking debt advice in England and Wales last year - that's a staggering 1.4 million people.

Research from debt solutions consultancy Thomas Charles also shows that some 2.5 million adults are struggling to repay debts - an increase of 21% over just six months. "If action is not taken to curb borrowing trends in the UK, the situation is likely to spiral," says James Falla, managing director at Thomas Charles.

I agree with the previous comment. I've lost ALL sense of customer loyalty to ALL companies, whether it be banks, credits cards, utilities etc etc. We've been ripped off, treated badly, taken for granted for years, and now it is time that we became as ruthless as these faceless, arrogant companies.
23/02/07 alaneroberts
29

live life on the edge...but do

If you need a credit card, shop around, there are some fantastic offers around, 0% for purchases, balance transfers etc.

If I need to use my card I apply for one of the above, make the purchase, pay the balance off over 6 months or so interest free then cut the card up and cancel the account.

I recently bought a £4000 car for the wife. Bought it on a 9 months interst free card. Spread the cost out over the 9 months. Car then only cost me £4k.

Anyway, there is NO customer loyalty anymore from ANYONE, so bin the card, cancel the account and go elsewhere. It then their loss NOT yours !
23/02/07 live life on the edge...but do
33