Here's yet another Talk Talk gripe for you.  I don't think for a minute that we are the only ones who are seriously disappointed with their poor customer service.

After five months of phone calls and e-mails, I have still not had a sensible and productive conversation with anyone at Talk Talk.  I managed to get through to someone in Delhi today and I was then transferred a total of five times over the next hour.  Eventually I was transferred back to the customer service person I spoke to in the first place.  I wanted to do was cancel our line rental!  Is it so difficult?

I never thought I would say this but we are seriously considering going back to BT and I thought their customer service was woeful.  People complain about them all the time, but until you've tried a worse internet provider then you really don't now just how bad it can get.  And believe me - you can be quite literally tearing your hair out with frustration!  Now BT are not anywhere near as bad as Talk Talk in my opinion,  so with this in mind I have just sent Talk Talk a letter of complaint and the text below is an extract of what I said to them:

For those who wish to complain to Talk Talk they have a dedicated contact page. Don't forget to leave a message on here and let us know how you get on! 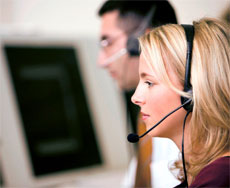 "I decided to leave BT because there customer service was terrible and I was promised that Talk Talk would be better, a lot better.  But you are worse, if fact I think the worse company I have ever the misfortune to deal with!  On our first bill there was statement Here at Talk Talk were truly committed to providing you with the highest level of service; I notice on our latest bill that this statement has disappeared very strange that!"

...come back BT, because all is now truly forgiven

Well I don't really expect to get a response to that letter, but who cares come back BT, because all is now truly forgiven since I have had such a terrible experience with Talk Talk!

By: Come back BT

Won in Court this week against TalkTalk/ debt recovery agents.

Long story short - wrote to them in 2018 to cancel the account as per their written T&C's - they failed to do so and kept racking up monthly costs. I'd cancelled their Direct Debit to stop them raiding my bank account after I sent the cancellation letter. I paid any outstanding balance and got on with my life.

They kept my account going and eventually sent me a "Final Demand" letter for Â£130.00 - I ended up in correspondence with them to try and sort it out and during that period of trying to sort it out, they sold the "debt" on to JC Acquisitions.

I got the usual bully boy tactics from their debt collectors who threatened court action. So went to court this week. The judge threw their case out! The judge was absolutely scathing about TalkTalk and their 'customer service' and the same too about their debt recovery people who held in very poor regard. He said many times during the hearing "You should not be here for wanting to cancel your broadband connection"

They really are a disingenuous, useless, unethical and corrupt company and I was beaming as I left the Court building.
21/01 Allotment Lad
0

OMG where do I start? As a "vulnerable customer" I was treated worse than an animal, this is by far the most despicable disgusting company I have ever had the misfortune to deal with, I curse the day I chose them as my provider, they screwed me in every possible way.
08/11 Sam01
1

I moved house and contacted TalkTalk to cancel my contract. two months later I'm still getting billed and on contacting them to find out why I spent an hour in an online chat who couldn't help me and gave me a number to ring. They put me through to four different people/teams and then cut me off. I had to spend another 30 minutes going through it all again. They are all very apologetic but useless. They seem to deliberately make it impossible to cancel or at least very difficult. I will actively dissuade anyone to sign up with them as they make your life hell!
04/08/21 timbo
2

Currently in my 6th week trying to get service from them. Even been dealing with the high complaints department, with Molly Garner. Router arrived yesterday, 1 week after installation, only for them to tell me itâ€™s not active on their systems. Been lied to over and over again, honestly speechless at this point. Canâ€™t think of a worse experience with any other company.
12/06/21 FUTT
1

I lost the will to live talking (trying to talk) to their Indian CSA. She would not listen and just kept returning to her script. The script was not appropriate to my problem. I asked to speak with a manager and I will have to wait 48 hours to speak with them. I swear to god I've never been that wound up and angry speaking with a call centre rep, ever!
10/06/21 HRL
1

Talk-Talk has not signed up with the communication ombudsman. Now there's a surprise
06/06/21 Big Dave
0

The way they treated this vulnerable customer is nothing short of criminal, 3 weeks waiting for an engineer who never showed up, instead of the compensation they promised me, they stole Â£60 from me, unbelievable, worse than cowboys, the ceo office couldn't care less, no one cares, company from hell, AVOID AVOID AVOID.
18/05/21 Ramzy
1

Been having problems for a fortnight now, No or intermittent broadband, when working I have seen a snail move faster, as for the service all you get we will check the line out for you then of cause in their eyes things are OK!!!!!!!.
And if you try their so-called customer service they are short-staffed due to COVID-19
I do not know why I am paying Â£20 a Month for this so-called service.
Have only just started a 18 Month contract.
15/05/21 Hood
-1

Full of promise and lots of help and looped links that go nowhere. I left them frustrated with their customer service after they took over Tiscali and then went with BT with which I was happy but their renewal offer became unaffordable so I switched back to TalkTalk based on affordability. Big mistake! If anything their customer service has worsened. At least before one spoke to a person. I am now simply trying to find out about wifi calling from my phone to their network. Previously it was a run around trying to actually log in to my account for days with no access. This is just not good enough. I agree with the call for Ofcom to investigate their customer service. Please CEO Tristia Harrison get a grip on the customer care side of your business. Your business model over offers and under delivers.
27/04/21 Suckered Again
1

Why are ofcom not punishing talk talk for their unacceptable behaviour?
26/04/21 Brassneck
0

Please take care when using this company. i have a big problem with them , I have received a court letter stating I owe Â£400 pound from god knows when. I have been with my current suppliers for the past 5 years and only in the last couple of months have the been in touch to say I owe this money. Won't be the first one they do this to and won't be the last. companys are on the fiddle
01/04/21 Mark
1

Me too, I joined on the 29th of December 2020 Since then I cant access my account I have spoken to many TT operatives who have promised to sort me out, I too left BT because of rising prices my phone now rings exactly like a USA one, one ring followed by another a few seconds later. I wish I could leave without penalty but I have been told I cant. Rubbish service.
31/03/21 ZAK.
1

I agreed to a fixed 18-month contract with Talk Talk...however the fixed price was never honoured..they still insist that my fixed-price contract was subject to price rises...have I got this wrong? I was assured on the day the agent called me, that the price stated would not alter during the 18month period..and I am still phoning them every month to ask why I am not paying the price stated on my paperwork..does fixed mean fixed? or have I got that wrong!!!!
02/03/21 Frustrated customer
1

I thought I may have been in a minority complaining about Talk Talk's poor service. How wrong I was. I have no more patience after years of trying to get the service for which I paid so willingly, sorry, stupidly. .
01/03/21 Disillusioned
0

Can Talk Talk customer service get any worse?