Thankfully - they responded positively - apologised and stopped.  But how many times have we all heard fathers swearing at their children and you can bet if the children did, they would respond "I don't know where they get it from - the must hear it in school!"

I'm sure kids mixing at school is only part of it, but they must learn from somewhere in the first place.  Television can shoulder some of the responsibility here and I'll point the finger directly at Gordon Ramsay, because he is notorious for it and whilst some people may think his use of profanities is cool and entertaining, I certainly do not. 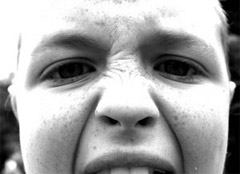 Older kids and young adults seem to be the worst offenders.  Walking through town on most days you'll hear them cursing and swearing, practically every second word is a four letter expletive and in my opinion there's absolutely no need for such language.  Its not just the boys that swear, the girls are just as bad if not worse.  I happen to think there is nothing less attractive than hearing a young "lady" cuss and utter such obscenities that would make a docker blush.  It makes you wonder about their upbringing.

How did our standards for communication fall to such low levels?  Have a think the next time you are about to use that "F" word.  Does it really make you sound cool, and could you perhaps say something less disgusting?  It is possible to vent your frustration and anger without using swear words and it certainly isn't the sort of thing that's nice to do in public.  I for one, would welcome the return of the swear box in the family home, perhaps the proceeds could be used to treat the family to a holiday or something.

I agree with most of this. I'm only 15 and I do swear quite a lot, but only around my friends, not around adults and around children I try my best not to. Most rap songs are censored, though, so they can't be the cause of all the swearing. Swearing is on TV more often before the watershed-the words b*tch and a*s aren't censored anymore on a lot of programmes. I think if we're going to have the watershed, we should actually use it.
02/06/12 Holloway
-12

It appears to me that most people under thirty years old listen to Rap. I have had countless arguments with them playing this so called music at full blast (on buses,no headphones) to be met with profanities and threats of violence.
Listening to this rubbish must warp their brain so that profanities become part of their normal everyday speech.
As a friend of mine is fond of saying “s**t for brains”
I have got to the state that whenever I hear Rap music I want to grab the moron listening to it and ******* them
02/11/11 Stalag 14
1

At the risk of starting a race riot, I partly blame the popularity of gangsta rap music in North America, where I live, for the prevalence of profanity in modern society. It certainly doesn't make black people look very cultured when most of these rappers use obscenities in their songs.
02/11/11 Abe
-5

@athair_siochain: "In Australia using a 4letter word in public , ensures a $240 on the spot fine in Melbourne, maybe we should have that law here...."

There was once an era when the use of swear words were frowned upon, then the time came when we had foul mouthed celebrities using expletives in order to shock and to gain attention to themselves. Children are led by example, therefore if parents do not swear then most likely their offsprings will not. Disrespect, self respect?.... I very rarely swear, even then it is most often under my breath. But then, if I were to meet Tony Bliar I could'nt help but call him a lying, cheating, money grabbing B*****D.
29/04/11 Holy Moses
-10

Did you know that they ran tests and found out that swearing actually increases our pain tolerance? They got two groups of people to put their hands in ice cold water and timed how long they could do it for before pulling their hands out. They found that when they swore they could keep their hands in for longer. (The same tests were ran when people counted money too, so it's thought that money increases your pain tolerance too!)
It's not all doom and gloom, though I have to agree that young children swearing just feels wrong!
28/04/11 Ju
-2

Why are "swear words" even around?

Someone, someday long gone, must have said, this is a bad word.

How do we know that it's correct?

Kids, put your toilets on, we're going to the cat in the trump, if you need the shoe, go now or we'll money the throat.

Please tell me,SB how swearing is " an integral part of our language and communication skillset"?
14/04/11 DSG
-16

It's only an integral part of our language because lazy or uneducated people have made it that way. I don't think there is a need for swearing every second word, it doesn't help a person convey their point any better and it certainly doesn't sound nice.
14/04/11 Sam
-3

Not swearing is very middle class. All the other classes do it. Swear words are just that, words. See them as that and your problem is solved.
13/04/11 F***
-23

I travel on buses regularly and the amount of swearing I hear from kids to middle aged people; even though I am in my early 30's I would certainly not talk like that especially in public. A lot of these people talk loudly and use F words and even the C word and it usually appears in every sentence.

Taxi drivers are the other culprits; me and my partner sometimes travel by taxi and the driver assumes that because we are both male it is acceptable to have a mouth like a sewer.
13/04/11 dommy
-15

Not even remotely bemused

"Somewhat bemused" - In which ways is swearing an integral part of our language and why is it "necessary"?
13/04/11 Not even remotely bemused
-11

Swearing is an integral part of our language and communication skillset, it's necessary.
13/04/11 Somewhat bemused.
-29

No spitting at the bus stop please