I was at a bus stop the other week when a man came and stood at the stop and proceeded to spit every 20 seconds or so.  The man was probably stood there for about 10 minutes and therefore splodges of spit were surrounding him on the path within the bus stop.

I literally felt sick and I was so relieved when the man's bus finally came.  When he left the path had a scattering of splodges of spittle and it was absolutely disgusting!  I cannot begin to understand this vile habit.  This is a bus stop where people stand and on occasion put bags down on the path while waiting for the bus.  These days when I am waiting at the bus stop I tend to either rest my bags on my feet or just hold on to them rather than put them down. 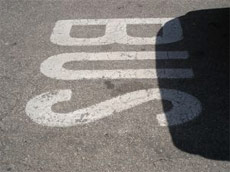 Spitting looks and sounds vile, then there's the germs

Spitting looks and sounds vile, then then there's the germs such as cold or flu viruses that this man may have that are being carried on the bottom of people's feet into their homes; I mean there was so much spit on the pavement it would have been very hard to avoid picking some of it up.

This particular bus stop is also on a route where children walk by or use the buses themselves.  No doubt any spit would end up on their shoes or bags and they would be oblivious to this.  Sometimes people make that awful sound before they spit, which is just as bad as the act of spitting itself.  I suspect that with some people it may be a kind of status thing when in group, while with others it is merely a disgusting habit that they have picked up.

I think it's quite funny to be honest...especially during all this stupid lockdown. The other day I spat on a timetable case at a bus stop right outside the place where I used to go. No one saw me thank fuck. Anyway, as long as this fella wasn't gollying at you, there's fuck all to worry about...is there? Plus, it's a godsend to golly on the ground when you've not long had dental work done. After all, that excess blood's got to go SOMEWHERE and, at the time, no one complained.
24/04/20 gasworks
0

I shudder when I think of the number of times that Iv`e probably trodden on some of this crap that spitters leave on the pavement, & taken their disgusting disease germs home on the soles of my shoes. I think that Iv`e been lucky not to have caught TB so far!
10/05/14 hairyfairy
-1

DSG:
Tuberculosis is rampant in London, Birmingham, and Leicester NOW
( according to a documentry on the telly),
Anything to do with the non-native immigrant population gobbing on the pavement?
The same people have a habit of blowing snot onto the pavement, still they reckon that's better than our habit of wrapping it in a piece of linen and then putting in a pocket, so one of them told me many years ago.
25/06/11 Ben
5

It's a disgusting habit. Never mind that it can spread disease (swine flu or, in the olden times, tuberculosis), it just looks awful and is revolting. I don't enjoy having to tread carefully on the pavements in order to avoid big blobs of gob every where. If the guilty gobbers must do it, please at least pick a place where they can't be seen and where people can walk without fear of slipping in a humongous greenie. Such as their own back garden. Or France.
25/06/11 DSG
-12

Little boys that hawk and flob
Spewing lads' spit from their gobs
A sight so wonderful to see
Let the little spitters be
They sniff back phlegm up through their nose
And chuck it out like from a hose
Until their lungs are good and empty
Loogies on the floor, nice and plenty
These nice young teenies tight and lean
Chuck out the juciest snots I've seen
As I view the snot laden floor
I beg for them to spit out more
They never fail to disappoint
As continued spit sprays all over the joint
All through their act I tug and pull
AAAHHH at las my pants are nice and full.
25/06/11 pro-spit
1

I adore watching boys spit. I love the way they sniff,grunt, hawk, growl and chuck out their juices. I see the same group of bucks every day on my way to work. As soon as I arrive at the busstop these lads are literally choir hawking,they feed off eachother,the endresult being them spewing their gob everywhere, on the floor,over the busstop shelter,on the backs of people's coats, anywhere you couldthink of. It's a shame when they get on their bus to school because I no longer have the pleasure of seeing them do their work. Accept it, lads will always spit, it's life.
25/06/11 pro-spit
1

Stop spitting full stop. It's bad manners, offensive not to mention disgusting. If you really feel the need to spit do it descretly into a tissue and put it in a bin. When I walk to the bus stop after work I am forever dodging spit balls on the floor, it's like a long trail of spit leading to somewhere. Ewwww stop it it's awful!
24/04/11 Ming mang moo
-2

I take the same bus to work every morning and see the same schoolboys waiting for their bus to school. By the time I get on my bus the ground, seating area and bus shelter window has been covered in spit and hawked up phlegm;hearing these boys coughing and sniffing back to clear their throats is unbelievably disgusting. Some of the boys even spit on the floor in the bus. I approached one the other day and told him that he he was a disgusting individual,he responded by calling me a rude name and proceeded to spit right in front of my feet. Boys like this should be reprimanded.
11/04/11 anti-spit
-6

:Footballers poor example by spitting on television. Why do they persist in projecting their muscus to the ground each time they stop running ? Under observation tests it has been proved that women footballers do not spit whilst playing. Is it a sign of masculine aggro? If it is due exertion then why do they spit in the tunnel before the game starts. Why do the managers spit whilst sitting on the bench? Athletes in other sports do not spit with such regularity. As well as the health hazard this is a very bad example on prime television to the young fans and should be stopped.
08/11/10 Topchief
4

yeah dats rite him mite av pneumonoultramicroscopicsilicovolcanoconiosis or breaved in some crap or summink.
24/06/10 rappor
1

...the man ..you dont say how old he is...he may have mental impairment. He may have asbestos in his lungs, he may have pneumonicosis....there are many possibilities. Some people have jobs dealing with bodily fluids..grow up. Thats one man in billions.. Then agains if its aggressive projectile spitting Im right with you buddy...I know someone very good at that.
11/06/10 Frogmellah
-6

Its just a basic way of the worlds brain-dead (or close to it), trying to show they're above other peoples ideas of a nice place to live in, with respect & control. Weird how people react in that, doing a small disgusting gesture as if to say constantly "I don't care, I'm not afraid of the big wide world" :) Problem is, that's all it actually does prove - they're all so nervous of just standing still and doing nothing but go about their own business. There's a broken nervous bit in their minds LoL :) Poor things ;-)
28/05/10 Phil
-7

Things aren't what they us

You don't "need to spit". If you have problems with catarrh then buy a box of Kleenex and carry some with you. How hard is that?

1. Learn to write English
2. Stop pretending to be a yardie when you are probably some middle class kid with overprotective parents.
01/05/10 Things aren't what they us
-12

ok I'm going to be honest just to try and prove a point, I do tend to need to spit while walking home every once in awhile and I'm often embarrassed and only do it when no one is near and to the side. When I see someone else doing it in front of me I get offended, I have the manners to wait to be unseen. I also HATE it when someone is heading towards you and spits on their way and its almost at your feet, turns my stomach.
12/04/10 keri
-12

I was walking to school one morning when a boy in front of me hoiked spat a rubbery green oyster onto the pavement. It sounded and looked utterly revolting. A woman waking the other way obviously thought so too. She put on her best disdainful look and said, "Don't you know that spreads diseases!?" The boy stopped and regarded the gelatinous pustule on the ground and said, "Your not going to eat that, are you? Naturally the woman had no comeback. I'm sure the boy is happily spitting in his manhood in the hopes of reliving this conquest.
11/04/10 Turdsanall
8