Not only should the compulsory Welsh language lessons in schools be scrapped, but Welsh language road signs should also be abolished because they lead to confusion for drivers.  Here is a perfect example; Usk is the English language place name and the Welsh language name for the same picturesque town is Brybuga.  Make up your own mind which you would prefer to use.

When children are leaving school without a grasp of basic Maths and English language, the time spent teaching Welsh should be re-allocated to these subjects as a priority.  Pupils should only be allowed to take Welsh language lessons when they are proficient in both Maths and English.  It is a fact that 80 percent of people in Wales do NOT speak the Language, yet is is foist on us by the 20 per cent minority Welsh language mafia. 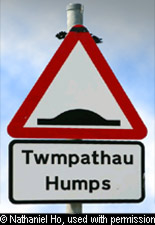 All official documents must be delivered in English and Welsh whether we want it or not, and this generates enough waste paper to destroy a small rain forest.  Isn't it time for sanity to prevail and make the official language of Wales ENGLISH?  I am not against those who wish to use the language doing so, but NOT for the majority to shoulder the burden.

For those who wonder, I live in Gwent, formally (before 1973 reorganisation) MONMOUTHSHIRE and I am proud to live in part of the country that for many years was neither considered to be in England or Wales.  I fondly remember the signs as you crossed the border that read "WELCOME to Wales AND MONMOUTHSHIRE".

With the advent of the Welsh Assembly in Cardiff, I wish to proclaim "FREEDOM FOR MONMOUTHSHIRE" (all of it; including the parts annexed to what is now Caerphilly County Borough area).  I am sure we have our own home grown idiots in this area who would be less of an embarrassment than Rhodri Morgan.

So now Carwyn Jones wants one million Welsh speakers by 2050. It certainly was informative to read the comments on the various articles published on this topic. The South Wales Argos, for example, had 67 comments - the vast majority opposing the project as a waste of money. Aside from the First Minister, we had Blaenau Gwent AM Alun Davies predictably criticising him for not doing enough, "Reaching a million speakers is a deliberately ambitious target," he said. No, actually, it is a genuine measure of just how blinkered and obsessed Mr Jones and his crannache actually are. AM Davies's job title tells you all you need to know. It's "Minister for lifelong learning and Welsh language". They must think learning Welsh is the overwhelmingly most important subject an adult could possibly study. Also, I couldn't help wondering about exactly what he meant by the statement, "There are challenges ahead, but we can undoubtedly face those in the knowledge that we are building from a position of strength." He can't mean numerical strength of speakers as the census figures for 2011 were down from 2001 and he can't mean the groundswell of ensthusiasm of the populous. Most of those comments on the articles I read showed not ensthusiasm nor even apathy but downright opposition. Maybe the "We" refers to the current political and media set and by "from a position of strength," he mearly meant, "We're in charge."

Well, they might want to lead but I will make the prediction that there will be at least a million who don't want to follow and we will be listening. The more politicians support such policies, the less likely we are to vote for them.
05/08/16 JFTB
2

I see there is now an Abolish the Welsh Assembly Party:
http://abolishthewelshassemblyparty.co.uk/
Does anyone want to comment?
20/02/16 JFTB
0

I knew it was bad up there CS, something is going to reach a breaking point if it continues.

C.sense - you choose to oppose everything in the Welsh language and yet you purport to being "welsh". You would have been kicked out of England, (the land you want wales to be) if you harboured that attitude towards them - they would tell you to sod off. You are a foreigner here, you don't know the meaning of place names or the nation's topography. Stick to Queensferry and that region - it's a dump. It's inhabitants are as welsh as Putin (and harbour the same ethnic cleansing thoughts towards us as he does towards the Ukranians.) Racist thugs the lot of you!
08/11/14 Ditto
0

Anti English play C. Sense? What an ignorant tw@t you are... The strike in Chwarel Penrhyn was about pay and conditions for the quarrymen whilst the bstard lord Penrhyn lived in absolute luxury. The theatre has a Welsh name because it is in Cymru and in a Welsh speaking area, this isn't Berkshire is it?
Defacing buildings? That's nothing compared to your attempts at linguistic and ethnic cleansing of this country. What will you do when England demands independence? Lets hope you and your flag waving queen butt licking almost English filth up sticks and settle there.

Ella - good name, it means " maybe" in Cymraeg and kind of sums up if there is intelligence between those ignorant ears.
08/11/14 Mersey beast
0

The only thing that will stop the Welsh cunninglinguists, is an unlikely vow of silence. As, sadly, their frequent acts of barricading and defacing buildings, goes totally unopposed, as the silent majority watch in disbelief, as this once peaceful region is brought to the brink of collapse.
Take the new art centre in Bangor, Pontio, fifty million pounds of public money, to stage devisive anti English plays, ugly, unfinished and nowhere near completion. Director sacked early on, through not being "Welsh enough", instead of being called Bangor Theatre or Bangor Art Centre, given a title only a few can relate to. Couldn't organise the proverbial party in a brewery !
08/11/14 common sense
0

I'm just thinking from reading a lot of mixed comments on here which clearly shows a divide of opinions regarding the welsh language . Quick resolution ..... divide Wales. Let the British majority in Wales then get on with more important things in this world, and let the welsh linguists thrive in their own culture in their own regions. Then maybe everyone will be happy.
08/11/14 Ella
3

Allow some time, when shopping this weekend, at your local Lidl store, to push through the barricades of Welsh language protestors !
08/11/14 common sense
0

Road signs in welsh ! I have so far managed to find the hotel premier inn, but have been driving in circles to find hotel gwesty. Btw what are slow Arafs ?
07/11/14 Ella
2

Dangerous ground, Mersey beat, to start a debate about unusual sounding place names, don't you think ?
Wales is smothered with rather odd place names.
Still unpronounceable, to almost everybody, including those that live there !
07/11/14 common sense
0

Who are the Berks?

C.sense - if you don't ask, how will you know? But don't hold your breath, unless you live in South Wales (or the black hole as I call it) you have no chance. As far as they (the south) and WAG are concerned, north Wales doesn't exist.
05/11/14 Ditto
0

I'm sure you are right, some people will want to learn Welsh. Much the same as I would like to play the piano and the guitar, learn to fly, scuba dive, base jumping, climb Everest, etc etc.
I wonder if the Assembly will give me a grant to fulfill all these wishes ?
05/11/14 common sense
1

The schmozzle over English language