Hi all, I've got a gripe for you.  Now just to give you a brief background on myself I'm 23, a white British male who is single with no kids, the lowest of the low according to British society but that's another gripe entirely.  I've worked since I was 16 and whilst I was a full time college student I took on part time work and was paying some taxes, although obviously not much.  It was the same story when I went to university until I was 22.

I'm now almost 24 and managed to get into a full time job straight out of University working for, ironically, the local college I attended when I was a teenager.  My gripe is about EMA and about the strain on society that some of these welfare dependant mongrels are going to be for all of us during their lifetime.

When I was 16 my mother made me go out and get a job, and all respect to her for that.  It was only a 6 per hour supermarket job but it taught me all about managing money and allowed me a social life (when I had time) and some financial independence.  I now teach young people and as I it wasn't that long ago when I was in their shoes, it gives me a good insight into why the system is wrong. 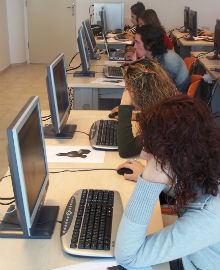 EMA - spend it on booze and cigarettes

A lot of them simply DON'T WANT TO WORK and they say they come to college just for EMA.  Some of these youngsters have part time jobs and don't get EMA as a result, others have high earning parents and also don't receive the allowance, but that doesn't mean their mums and dads are feeding them cash.  These ones are the exceptions as it's usually the complete dossers who get it and spend it on booze and cigarettes at the weekend.

Maybe it should be more like jobseekers allowance.  For example if you are looking for a part time job, you get £30 a week.  If you get a part time job while you're at college, as a reward you get £50 a week for the first few weeks instead of £30, then back to the normal amount (similar to the back to work for over 50s scheme).  As for the lazy ones who can't be bothered - they get nothing.  They can't sign on the dole until they are 18, so it may get them to get their backside in gear and find a job or apprenticeship.

Just an idea, it probably wouldn't work and people would still fiddle it, but surely it couldn't be worse than the current system?  Now after all that...  I had to work through college and couldn't get EMA.  When it was available the dossers all cashed in and abused it then the government decided to scrap it.  Do the powers that be no longer care about further education?

"But the truth is that benefit claimants are being deliberately set up to fail in order to achieve sanction quotas without regard for natural justice or their welfare. Staff are being asked to behave in a manner that is against the department's values of integrity and honesty."

The complainant also alleged that senior managers electronically altered a claimant's file to make it appear they had been told to attend the job centre the following day when no such notification had been given. Failure to attend a job centre interview is grounds for sanction.

TIME TO GET RID OF THAT PRAT IAN & HIS MATE DAVID !

Young British people can't find jobs because immigrants are taking them all.
You seem to have too much time on your hands writing stupid articles like this. Oh wait, you're a teacher. That explains it!
02/05/14 Phil
0

And who do you blame when both parents are working an the lazy wasted shites wont do a days work ?.
10/02/14 racehorses
-3

because their dole scrounging mum and dad have set a very good example for them.
19/07/13 Nick
-9

He sounds a great guy jobby. Your arrival must have been a serious test for the him & your mom, what with their belief in the "Trojan" being so cruelly shattered.
30/01/13 boblet
-7

Stirling effort GOW I also attempted to list the inconsistencies in jobbys posts. I can only guess that they allow computers on the wards in the US.
30/01/13 boblet
-12

I am not your 'buddy', never will be, have no intention of being such, and kindly do not address me in that childish patronising manner.

Kindly re-read my comment to you at 17:12 and take heed thereof. Having done so, please fade into obscurity, which is a polite way of saying something else.
30/01/13 Friday Lunchtime
-13

Guess what, jobby? I don't need your 'advice' or your childish patronising drivel directed at me. Take a 'hike' as you US Americans would say.
30/01/13 Friday Lunchtime
-12

Friday Lunchtime, I doubt if jobby has ever found the time to be a scrounger.

He worked on a farm in Norfolk as a child, grew up in "the projects" in North London, has worked for/been an officer in Thames Valley Police, been a postal worker (somewhere working 18 hour days with 3 hours sleep). Somewhere along the line he has been a millionaire (in pounds), owning mansions, fast cars and so on. He has also played as a quarterback in an English football team in France. (Now I'm not a big football fan, but I've never heard of quarterbacks in English football.) Judging by his turn of phrase he has also spent many years living in the USA.

He must have lost those millions now because he dreams of having a nice car (currently he owns 5 old ones), because, wait for it, he has children to pick up from school!

To achieve so much and still have school age children; well you wonder how he finds time to post any comments at all!
30/01/13 grumpyoldwoman
-4

Jobby : That's your problem. The irony is that you live in one, but are probably a scrounger. That makes you as bad as you are attempting to portray me, whereas in reality you know absolutely nothing about me or my lifestyle, and are just making absurd assumptions.

For all you know, I might live in a shoebox in a hole in the road, and have to eat a handful of hot gravel for dinner and get up in the morning half an hour before I went to bed, walk 8 miles to work at mill with my shoes tied round my neck to save shoe leather, and when I get home my dad thrashes to within an inch of my life.

How dare you imply that I have 'exploited' tenants. You really are a nasty and inferior being.
30/01/13 Friday Lunchtime
-13

Asshair : Do you have even the slightest evidence for your absurd statement? Being a wealthy landlord does not mean that tenants have financed my lifestyle. Is that perhaps a little too complex for your addled little brain?
30/01/13 Friday Lunchtime
-15

An Irish Bog hound, is not a parasite. Friday lunchtime is, is only wealthy because tenants have been financing his pleasurable life style.
30/01/13 athair_siochain
-7

I am so happy I'm a wealthy landlord and not an illiterate jealous half-wit like this Irish boghound.
02/10/12 Friday Lunchtime
-9

A teachers Job is to programme their students minds so they "work for a living'
It is time to teach our young people about the currupt financial world. tell them how banks lend money they dont have , if we had one world currency there would be no money market, this would put millions of parasites on the garbage heap, we would not find a need to import a product we can make here. I once went to Australia, the local Sunday Market were selling Pine/apples that had come from Brazil, the Sunday Market was surrounded by Pine/apple farms , dont blame our young people for not wanting to work. because they cant see a future, try to find a politician who does not collect rent or interest.
the landlords and moneylenders collect 95% of everything we earn. you may say that figure is wrong. can you work out how much rent and interest you pay. you cant because you dont know, when you get your hair cut 20% of what you pay is rent for the shop, the hairdresser has many overheads and all these have rent and interest attached, try to follow a seed of wheat till it becomes part of a loaf of bread on the supermarket shelf, a thousand landlords and moneylenders could have had a cut. it is incredible that those of us who dont collect rent and interest have to work for a living, so landlords and moneylenders can have a pleasurable life style,bring back hanging.
02/10/12 athair_siochain
3