As an elderly pensioner, I have been aware for the past few years that here in the UK, younger people appear to have very little respect for the elderly folks.  I can only assume that the parents of these children have failed to instill such respect in them.

I walk with a stick and yet very often young people expect me to move out of their way, rather than the way it should be.  I find myself often wondering, do they not have grandparents?  If they do, would they not mind THEM being treated so badly by young people?

Asian communities invariably cherish their old folks.  Oh, that we would, too!!  I am 71 years old now and I'd swear it was only yesterday that I was young, and I had the utmost respect for those older than myself.  How very quickly we age.... 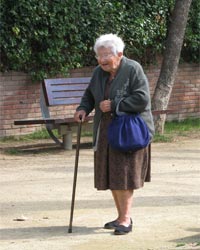 ...the younger generation lack respect for us "oldies"

Soon, you, too will be amongst the elderly population, so it's in your own interests to encourage your youngsters to appreciate their elders just as we appreciate youth!  Whilst it would be wrong to suggest that all of the younger generation lack respect for us "oldies", I think it fair to say that the vast majority, sadly, do.

It cost's NOTHING to stand aside whilst someone elderly and possibly infirm goes before you.  To give up your seat to someone much older than you surely isn't too much to ask?

I suppose schools no longer encourage respect of the elderly; when I was a child, we were practically forced to stand back whilst our elders went before us and we didn't feel resentful.

People shouldnt ask someone infront of them to hurry up, Just walk round them much easier and not disrepectful
20/10/14 Mr H
1

First told to me in the 1960's
Describes todays society with its political correctness and human rights nonsense.

I believe OAP should be respected, but I also the older people should respect the younger people because I have seen it on the buses,when a schoolchild give them a seat they don't say thank you.How do the younger one learn if people don't show them the way.
07/07/11 Floosie
3

I am 63 and am disabled and I could tell you some horror stories about people both adult and kids but mostly people between the age of 18 and 40 and if these people threaten or attack the aged or the disabled whilst by themselves or in a gang, then they be nothing but a NONCE my son and forget about blaming the drink or drugs or both. THEY BE NONCES JUST AS MUCH AS A CHILD MOLESTER OR PAEDOPHILE. Full stop.
05/05/11 Peter W
-11

Well said saaaaammmmmmy. Not all kids are bad and do deserve some respect. After all, with divorce rates sky high, family fueds and problems, kids are expected to accept all this!

Yes, adults keep making mistakes, family break ups, we still have high expectations for kids to do well in study. On top of all of this mess, a high image pressured world adds to the stress.

I think we should show respect for them but on the other hand we will give them respect but we should get some back many of the children these days arent bad and we do deserve some respect back !!xx
09/11/10 saaaaaammmmmmmmyy
3

I think that many of us dont give elderly people the respect they deserve and if it wasnt for them life wouldnt be as it is known to us know, I think many of us look down on them and think they know nothing but realy they have has many more experensses that we will never have a chance to have many of them good and some are bad I think the people who treat them with a lack of respect want to go back and learn respect for others and learn what they did for us, and people like that should be ashamed of treating them like that . :D xx
09/11/10 ava
-9

What is the point of a hood then Old and Grumpy? If it rains you cover your head and dont worry about showing your pretty face too much.
18/10/10 nonny
-5

About to drop. Good on you. In this situation you were right and they were bang out of order. In any case I'd say that sixty isn't exactly old these days. In you're seventies yes, or maybe late sixties but I know quite a few fit early sixty year olds that do not need or want special treatment.
13/10/10 AOD
24

I was 32weeks pregnant and carrying twins. I stepped on to a bus and sat on azwindow seat minding my own. The bus began to fill with people and soon enough it was full. This guy, maybe in his 60's sat next to me and was talking to a lady who was standing up. The lady again was maybe in her 60's and wasn't carrying any bags. Then the man turned to me and said do you mind moving beryl needs to sit down. I was in a situation, normally I would move weather I was asked or not but given my situation heavily pregnant with twins I couldn't stand for 25minutes. I politely answered I can't I'm sorry I don't want to risk falling I said patting my bump. His face dropped and he turned to beryl and fumed "the youth today beryl disgusting! On her head if you fall and crack your head open!" angry I turned to the man and said "on hers if I fall and lose my babies and why don't you move for her anyway?" he went silent and said "I'm registered disabled I'm entitled to a seat." I pointed at the sticker on the window you know those that have like a wheelchair picture and an outline of a 'pregnant' lady. I said I'm pregnant so I'm staying here! Then they both got off at the first stop that was only 5miniutes away. I'm not a teenager I'm 24 and had to get this gripe out somewhere. I'm fed up of the older generation hating on us younger generation.
13/10/10 About to drop
-1