What is really very annoying is the self-righteous and sometimes pitying nature of some of this elderly people in society, particularly towards teenagers and youngsters.

After school, I get a public bus home which normally takes an hour; it's usually quite crowded so I often find myself standing up for most of the journey.  I get the bus alone so I usually just listen to my iPod.  However I am frequently greeted with frowns and angry faces by the elderly people on the bus.

I'm always polite to elderly people and often let them go past me and sit down.  I remember my manners, but they always seem to have the attitude of 'Teenager, she must be a yob, want to steal from me or be rude'.  This is something I would never do and it's actually quite upsetting some of the comments I hear.

Earlier this year I was in a car accident.  I was in the front seat and I don't want to go into long details, but my leg was partially crushed and my bones shattered.  I now walk with a limp even though I'm fourteen and standing for long periods of time (even just ten minutes) is actually quite painful.  The bones have not healed and recently I have got an infection from one of the leg wounds which makes it almost impossible to walk or even stand properly. 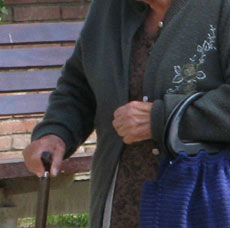 Whenever I can get a seat on the bus I always sit down, I feel awful sometimes leaving an elderly man or something to stand, but I have my own disability too.  Just because I am a teenager, that doesn't mean that I don't feel pain in the same way that someone their age can.  I quite often get berated for sitting down and on one occasion even grabbed on the shoulder by one of the elderly folk with a 'No respect' or 'How horrible and disobedient to leave someone else standing when you're fine'.

I always try and explain that I have my own disability, but often I am told that I'm just a yob and I must be lying.  There was me thinking that a yob was someone who broke windows, stole cars, mugged people and was generally a nuisance.  Apparently a schoolgirl in pain who simply wants to rest her foot is now a yob too!

If there was someone in terrible pain or more in need than myself then I would definitely offer up the seat, but please don't discriminate purely on the basis of how old someone looks.

I think media hasnt helped because alot of crimes reported are put as being commited by young people and so some people may proceed with thought of all teenagers are the same.
At the end of the day the way you were treated was horrible at the end of the day just because someone may look like they are ok doesnt mean they are psyically or otherwise
20/10/14 Mr H
0

The problem is this young people: if you are a student you're supposed to be studying! If you are justing coming home in your school uniform after a good day's study who's gonna have a problem? If however, you are playing truant and popping into town on a weekday in your sportsdirect.com kit with an iphone in hand you look no different from a young chav and of course you'll be watched and hated! It's got nothing to do with whether your turn your ipod volume up or down.
23/05/13 Nick
-2

In fact this country has got too many teenagers roaming the streets it's becoming a problem. A lot of them deserves to be sent to Afghanistan to get a life.
23/05/13 Dave
-3

Of course the elderly will assume teenagers to be yobs, in the same way that teenagers call them old crooks. The two groups can never sort out their differences can they?
23/05/13 dave
-4

Can people stop talking and telling teenagers off as if we are all the same please!!!! Petra - when I use my iPod I always check it is not too loud. I agree with this article completely, I always try to smile at everyone I see but often when it is old people I recieve a glare in return just because of my age. When i'm older I'll make sure I treat teenagers with exactly the same respect as everyone else I see, no matter their age. It's personality and manners that count, not age.
13/04/13 Teenager
-3

I know exactly what you mean. Often when me and my friends are in shops security guards breathe down our necks the full time we're there, even if there are lots of people in the shop and only one security guard, they spend the whole time we're there watching us. It's as if the second we turn 13, we're not people, we're teenagers, and it stays like that, and when we turn 20, we're just "young people" but we still get treated the same way.
02/06/12 Holloway
9

Me again, my iPod broke a couple of months ago and I can't be bothered to get a new one. I'm still getting glared at and when I asked I was told to mind my own business.

All I do on my bus routine is sit at the bus stop minding my own business, get on the bus, sit down quietly, spend the entire bus trip silent, get off and go to college or work. I don't do anything to upset anyone, I wear what I'd consider respectable clothes (Unlike some people I see sporting their lonsdale trackies and reebok trainers when they aren't exercising) so I don't understand why people seem to hate me so much.
11/07/11 Connor
0

The Merry go Round

That's a fact: elderly people assume teenagers are yobs because when they were teenagers they were yobs too.
05/03/11 The Merry go Round
2

No I mean it's quite, I have the volume locked to about a third to half the way, and I don't have it that loud anyway, I can hear everything they say even when I have music on. Recently I have been having hearing problems, mainly because of ear infections, so I don't like having on loud at all just to be extra careful. It seems to me like they're trying to make me say something so they can have another thing to talk about on their bus trips.
21/02/11 Connor
-6

Connor - sorry to be persistent and I will let it go after this but a lot of people have no idea how loud their music is , even with headphones in. It "leaks" out and is very irritating.

If that isn't the case then I can't see why people would glare at you for no reason, can you? It does not seem all that likely. You could try asking politely if you have done something to offend them!
21/02/11 Carrot
-10

Nope, earplugs in, sat on my own, but they glare at me. I can hear them talking about me sometimes, but I know if I was to say something about it I'd get kicked off the bus instead of them.
21/02/11 Connor
-34

Connor - when you say you only play music at low volume in public, do you mean without headphones?

I have noticed that now music can be played on mobile phones many young people no longer even bother using headphones. It's very anti-social and rude.

I am relatively young but I have never found older people glare at me in public - why would they? If you are being glared at then you are probably doing something to irritate people.
21/02/11 Carrot
10

Petra, I listen to my music at a very low volume, but I still get glared at. I even get glared at when I'm not even listening to music, but sitting waiting for my stop.

People jump to conclusions wayyy to quickly, even the old and oh-so wise elderly people.
21/02/11 Connor
-12

For those of you youngsters , or not so young, who complain that people glare at you on the bus or train when you are using your I pod, the answer is simple.

They are glaring because it is too loud and the noise is leaking out. It is a very irritating sound in an already stressful world.

Turn it down please. If it is that loud you are actually causing damage to your hearing and will go deaf long before you are old.
26/01/11 Petra
0