My grandson, aged 9 has been told by a teaching assistant (non-qualified teacher helper) that the Council will send a nasty letter if he doesn't bring a form in.  Last week he had to tell his friend that he couldn't come round after school that night as originally planned because Mummy was busy.  The friend's parent had been informed by my daughter but the child was upset.  The teacher kept asking my grandson over and over why he had changed his plans, in front of the whole class.

My grandson came out crying and his Mum marched into school and shouted at the teaching assistant.  The school have said that she threatened the person physically which is untrue.  They say they have four witnesses amongst the other staff who saw this happen, but they were not in the room and while they may have heard what was said there was no way they could have witnessed her behaviour.  The school have filed a report to the police, but say they will take it no further unless my daughter wishes to do so. 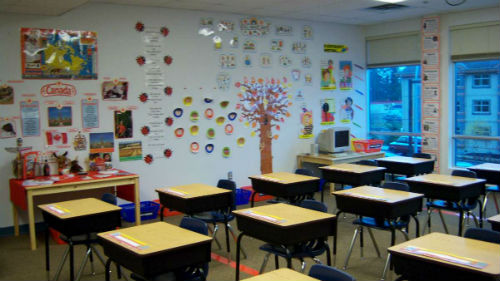 Grandson left traumatised by the incidents

Should it have to come to this?  My grandson is a bright, polite and well behaved little boy at home and school but he and the rest of us have been left traumatised by the incidents.  His brother was at the same school and had no problems but the member of staff involved was not there at the time and there was a different Headteacher.

My daughter has actually talked to the police who say they will not investigate the issue unless the school wish to proceed and that they will not have a record with a black mark against her name.  She has also talked to a Solicitor in case she needs him.  He says he would write to the school and the Local Education Authority in the first instance to try to resolve this issue.  It is difficult to know how to proceed, especially with an unhappy 9 year old refusing to go to school.  Fortunately there are only four days left of this academic year and I'm afraid to say he is kept at home this week.  Any ideas or similar experiences?

We have a disabled boy of 11 years old. He has a teaching assistant that has no complaints about my son but seems to like to complain about my wife and l ?? We love our son and look after him to the very best needs. But the the teaching assistant seems to pick at anything possible to get a reaction ?? She is very full of herself when we speak to her but likes my so react and he gets very upset, and should she do this as my son have severe learning difficulties low functioning autism and sensory problems. So if this TA states he has been bad in front of other people he will react and shout, but if the teaching assistant took me to a corner then all would of been fine. This teaching assistant complained about my sons shoe laces being undone and l apologised but he cannot do his laces on his own so l though that was rude as he had that day done yoga class. As time went through the weeks my son get the school mini bus and the teaching assistant had to collect my son off the bus and take him onto the bus but one day my son did't want to come off the bus as this happens as he does not like to leave places he has been as this is another part of his conditions. l had to move him off the bus in a mannerly pace but to my amazement l got a phone call from the school stating that they have been told about a complaint that the bus ladies who look after the disabled kids had seen my drag my son of the bus ?? So l put two and two together and spoke with the bus lady that she stated that the other bus assistant spoke with Mrs Middleton my sons teaching assistant then both stated they will complain ??
l then was issued a complement slip from the school asking me to phone a social worker ?? l thought at this point that this just isn't right so spoke with this social worker that just couldn't understand to that the complaint was made. See what l am getting at here is from all these issues it always comes back to the teaching assistant. l do not go to work as l am a full time carer for my with which suffers from arthritis and has been for 20 years and the way the teaching assistant looks down at me when we meet as to collect my son in the past before l managed to get the school bus sorted for him, Laugh under her breath and say sly comments as opening the gate. We had to change my sons diet as he has toilet issues and wears nappies as this is the stage at the moment, so we have changed my sons diet plan to help with mood swings and toilet issues like sugar tolerance will make him become angry towards other kids in his class room and to the teachers which has been going on and off for years. But to my amazement the teaching assistant doesn't want to comply with this change of diet and again l was shocked when speaking to my son he stated that the teaching assistant said to the teacher "o that just ignore it" ?? So l phoned my sons doctor and the lady doctor said it was out of order for them to think like this as it would do my son good to keep him off different bad foods to keep him healthy and the moods down, But again the teacher and the teaching assistant phoned to say they are not happy with the change ?? Now l feel the teaching assistant is controlling the teacher Mr Thomson like they are singing from the same faulty paper work ?? l have no worries about the school but its gone on to far with this teaching assistant and something needs to be done.
Why is she doing this ?? Can anyone help me as l am pulling my hair out about the hole situation here. With my daughters school "NOTHING" So why has this lady got it in for me as l am starting to feel like a victim now.
Kindest regards

Teachers returning to work after absence due to illness