I am a mother with three children, twin girls aged six and a son aged seven.  All my kids now attend a local primary school and I gripe is really with their policy on religious education.

I learned, and I eventually made up my own mind

My parents were atheists, and they allowed me from early age to study all sides of the argument as far as religion is concerned.  As I grew older I learned, and I eventually made up my own mind about life, the universe and everything.  I favoured the logical and scientific approach, so therefore chose evolution theory as opposed to the creation one.

Naturally, I felt that with my own children it was very important not to force my views on them.  I wanted them to have the same freedom that I had as a child and to see both sides of the argument. When the time was appropriate and questions were asked, they could make up their own minds what they believe.  Creation, evolution or whatever other religion is flavour of the month, the choice would be utterly theirs to make. 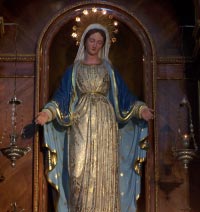 Over the last year however, the infant department of our local primary school has taken upon itself the task of instructing my children in R.E. totally against my wishes.  They have them believing that GOD created us, and that they should pray for their food, sing songs such as 'point to the sky and clap your hands for the lord' etc.  They are already indoctrinated, and are still too young for me to explain to them any scientific theory that they would understand.

I approached the school and asked them what we could do to resolve this situation.  They advised me that I could remove my children from Religious Education classes.  However, they then went on to say that this wouldn’t really solve the problem, because at infant level there is no SET curriculum; In fact the other lessons throughout the day could well have some sort of religious theme anyway, i.e. Thanking god for their daily crayons or whatever!

The USA have stopped this indoctrination in their schools, in favour of teaching scientific theory and fact, isn’t it time we followed suit?

Of course, religion should leave the natural world well alone. Essentially, the natural world can be explain in terms of natural laws - evolutionary theory holds sway at present, and most probably indefinitely.

Religion deals with a type of knowledge that cannot be explained by the naturalistic laws of science. Religion reflects an understanding; a way of knowing that cannot be written down in textbooks, or explained logically as if it dealt with things that were either 'black' or 'white'.

However, religion becomes very dangerous when people make claims to religion giving knowledge about morals; about how we should live our lives. Religion cannot tell us, for example, that marriage is exclusive to male and female; or that Sunday is a day of rest; or that Jesus is the only way to salvation; or that Mohammed is the 'seal of the prophets'. All of these statements are definete claims to knowledge that cannot be verified as clear items of knowledge and, therefore, should be taken as a matter of faith inclusive to those who believe them. Any attempt to impose or judge others relative to such beliefs is clearly unacceptable.

Faith is not a matter of certainty; it is a matter of trust based upon a knowledge that cannot be expressed in scientific or logical terms.
05/02/13 miserablemoaninggit
-4

In my opinion on this issue is what I believe, and I am a christian. You can be a spiritual person WITHOUT being a nun for sure. With me believing in Jesus is a definite Relationship not being Religious at all. I don't believe in crystal balls, ouija boards at all. Just living my life with Jesus in it and it is great. Jesus is the Son of God. And it is only up to you to make the decision to believe and not have it forced on you.
14/12/12 Donna
-11

If it's a religious school, then there's nothing you can do, short of them moving school. Don't worry too much-I went to a catholic primary school for five years, then a protestant school, and my parents just left me to make up my own mind-they were just the closest schools to where we lived. But as they grow up they'll start to question everything in the world-I'm 14 and I'm very sceptical about religion, politics, I've got an opinion on pretty much everything. As long as they know you accept whatever beliefs they choose, and will help them research different beliefs of they want, they'll be fine. Kids aren't as impressionable as people think-they won't end up religious unless they really want to.
08/04/12 holloway
-2

Those of you who read The Star or Guardian or Beano please look away now.
"The BBC has been accused of “absurd political correctness” after dropping the terms BC and AD in case they offend non-Christians.
The corporation has replaced the familiar Anno Domini and before Christ with Common Era And Before Common Era."
Todays paper.

And we pay for it with our hard earned cash, paying the licence fee.

The Loony Left are well in control with their, minority, gender, race, diversity rubbish!
I may sometimes offend people be they Christian or non-Christian , so what!
As I have said before the country gets dafter by the day,
25/09/11 Stalag 14
-13

You can't do anything in a school, according to the Muslim Council of Britain, that conflicts with the teachings of Islam - dancing, swimming, wearing normal British clothing, holding exams during Ramadan...
13/03/11 DSG
-3

The point of RE in schools is not too brainwash your kids- it is to teach them about what other people believe in, and I think that by not letting them dicide for themselves whether or not they want to belive in God.
06/03/11 PersonalOpinion
-19

There is no point to religion. There is no afterlife. Dust to dust it is. Nothingness. 99.99999999999% will be forgotten when they are gone. You are only remembered if you are some one like Hitler or Genghis Khan.

Whilst you are alive there is only one goal: sheer greed. Grab as much as you can for yourself. There is no morality to this, so what!
10/02/11 Death is Final
-1

Noneedfor name, I think you are confusing the terms 'theology' and 'philosophy'. As such, we are entirely in agreement, and argue that the banner of 'religious philosophy' would better suit. Theology is almost always more closely associated with the study of Christianity, whereas religious philosophy essentially looks at all aspects of religious beliefs and claims and simply asks: 'Do they make sense?'
10/02/11 miserablemoaninggit
6

I think there IS room for religion in schools today but not for 'preaching', for 'teaching' and it should be under the banner of Theology. Theology is the rational and systematic study of religion and its influences and of the nature of religious truth and there is a lot to of fascinating and interesting stuff which kids would enjoy. The issue is that many parents don't want thier kids converted into a particular religion. I am one of those parents. If you want your child brought up in a particular faith, then the church schools are for you. If not, it's Theology lessons.
10/02/11 Noneedfor name
-7

I agree with Bagpuss in that teaching RE must be particularly difficult. How can a teacher expect to instil a respect for the belief and culture of others (with 'religion' fundamental to many to the extent that it cannot be separated out) to the Christian student who believes that the only way to salvation is through Jesus Christ; or, to the Muslim who believes that Mohammed is the 'seal of the prophets' and God's final revelation to humankind (and, therefore, that Jesus was a mere prophet and not the son of God as Christians believe). I think RE should essentially come to an end, and rather the emphasis should be upon religious philosophy which would encourage students of all faiths to 'question' and 'examine', and to realise that faith should not be about certainty, but rather should be a lifelong journey accompanied by 'doubt' and 'effort' to answer the Big questions in life. In such a context, respect for people of different faiths will be automatic in that all will be viewed as struggling with the same questions and struggling with the different approaches to answer such questions.
09/02/11 miserablemoaninggit
-9

I find teaching RE particularly difficult. I understand that we teach about religion rather than preach it. The reasons given is to instil a respect for the belief and culture of others through a greater understanding. However, it is tremendously difficult. The only way is to ban religion, and if other faiths followed suit maybe that would be the way to go, however, Catholic and C of E schools would be up in arms, and the places at these schools are highly sought after as they do produce good results academically on the whole. I have no axe to grind, I can see both sides of the coin.
16/01/11 Bagpuss
4

Well said kit. A good balance in life whatever your belief is important. Unfortunately, it is those loud mouths that tip that balance.
12/12/10 bee pop
0

I am on record here as loathing the BNP, but there is oppression of women within Islam, not so much in the Koran as in how it is practiced. Under Sharia law a woman’s testimony is worth only half of that of a man’s. It would need two women to “balance” a man’s testimony.

The Koran states that both women AND men should dress “modestly” but but in many Islamic countries women have to cover themselves from head to toe if they want to go out in public whereas men are free to go shirtless and wear shorts in hot weather if they choose to. In their culture a good woman is an invisible one.

Islam as it is practiced does often oppress and discriminate against women; this does not mean that most Muslim men behave that way or that all Muslim women meekly accept it.
12/12/10 Kit
7

DSG = BNP - lies ! Women are treated like scum here by "white" men too! It seems Muslim women are treated as scum by all men, not just muslims?. Do you actually feel sorry for muslim women or is it just a nasty remark which has been made by bnp aggressors.
12/12/10 student
0