My son owns a motorbike and we allow him to take it out to ride on private land nearby.  Our house is not attached to our garden and we have to cross a small footpath to get on and off our property to a small fenced off concrete section outside our back door.  My son has now had three cautions for pushing his motorbike over this small path to get it into our garden to wash it down when we have been out.  The police officer in question knows when we go out and when we come back.  He sits there and waits for my son to do this and has recently warned him next time he will take the bike from him.

Can this not be classed as police harassment...

I could understand if he was one of those youngsters that ride their motorbikes illegally around the streets, but we act responsibly and take him to a place he can ride safely.  He does not ride on public highways or cause a nuisance like many of the kids around here.  By the way, this particular police officer just ignores them and focuses his attention on my son.  Can this not be classed as police harassment? 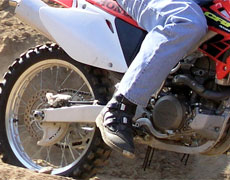 I feel he is getting tared with the same brush because his older brother (who no longer lives with us) was arrested several occasions for drunken disorder.  This police officer is victimising my youngest son because of the reputation of his older brother which is very unfair.  When my son refused to tell him his full name and date of birth on one occasion, he even went as far as saying he probably had a criminal record and that he would get his details of the database anyway.  I then pointed out that he was assuming he been in trouble with the police before, to which the officer replied that the family name rang a bell.

Well of course the name would be familiar, this was the same officer who continually arrested my other son! The word "polite" doesn't seem to have any meaning for this guy though and he comes across as a very aggressive individual.  He doesn't listen to a word you have to say and as far as he is concerned, he's always right and you are wrong.  I feel that the treatment my son has received is very unfair and I wish somehow I could complain about this officer without any repercussion, but somehow I doubt that would be possible.

Most of us have seen the television programme 'Police, camera action', or at least one like it. The police appear to use the programme to 'sex up' their image as we see them cruising around in flash motors wearing Hollywood style sunglasses even at night! Their jaws work busily, issuing sage advice and bons- mots whilst constantly masticating upon american style chewing gum. Their uniforms bristle with macho ordnance, radios crackle urgently and stingers writhe across the tarmac like demented snakes.
I am sure they are supposed to make us all feel safe and secure in our homes, but do we really need a half-dozen sports saloons and the deploying of a helicopter to catch a youngster on a stolen moped?
I would suggest that the comforting sight of blue serge, and the reassuringly strident blast of a police whistle that are synonymous with the 'bobby on the beat' image, are what most of us hanker after.
12/03/14 marmalade
0

Bulldog. Sounds to me as if there's a lot more to your hatred for the Police! Do you feel the same way towards magistrates and judges?
12/03/14 Anon
0

People , the police are getting caught out more & more nowadays , just look at the Stephen Lawrence case ?
They are criminals in uniform . Rotten to the core & with cameras everywhere now they are being put in their place ( James Kidd that pc who dragged & punched that women ?)
I've always said they are a rotten bunch
12/03/14 Bulldog
0

Friends of ours lived next door to a family where the husband and wife were both coppers. They discovered that the man was constantly watching my friend's wife.
Whenever she was by a window, the man was always there somewhere in his property looking at her.

One night she came out of the house to put rubbish out and he was in her back garden looking through the kitchen window.

He made some excuse about retrieving a football but none could be found in the dark (or indeed in the daylight next day). What really convinced them he was up to no good, happened several weeks later when they were talking to him over the garden fence and my friend's wife mentioned she didn't eat TV dinners. The copper said, that's not true I've seen the packets in your bin, and then quickly changed the subject.

Needless to say they moved 3 months later, and after that the copper approached me for a forwarding address so he could make contact. I of course played dumb and said we didn't where they have moved to.

I do wonder if setting a thief to catch a thief has deeper meaning and if the line between being a criminal and being a copper is a very fine line easily crossed. After all if your life is crime then could you be influenced to join the other sides when you see our legal system constantly letting criminals go free over technical issues?

Difficult, I guess we all hope we stay clear of criminals, but it appears we need to try and stay away from coppers as well.
24/01/14 Mal.
-1

Are we not all sick and tired of chavs riding up and down the streets? Yob + motor = trouble. So well done to the police. They are doing their job and they need to bully the bullies.
24/01/14 Nick
-1

There is a high percentage of police officers that also support the introduction of body cameras. It is their feeling that if the general public were to see the amount of abuse and crap that they have to put up with on a daily basis they would have a more rational opinion of them. Also they are confident that it will secure ten times more convictions than complaints.
For the public that are asking for body cameras their message is simple......"Be careful what you wish for".
Please note...their opinion, not mine. Don't attack me on it.
24/01/14 Samson (Delilah's too busy to post)
2

It's simple if you have a police officer as a neighbour do not upset them believe me you will regret it till the day you die.
24/01/14 jonobody
2

yes body cameras are a must have for the police!it would be a start,then maybe they will think twice about the way they behave in public-rudeness,stop & search for no reason the list just goes on & on.
get them onboard fast!
24/02/11 nw
-9

probably not a good idea to complain about the police, I did, now I have trumped up convictions against me, they will lie in court, i've been told by proffessional standards that there are "things in place" to protect the police, unless a judge thinks the said officer is telling lies then no charges can be brought. even when you have indisputable evidence to prove the lies. apparently it works on a thing called probability, they look at the evidence, decide that it probably didn't happen, no case to answer. i've had nothing but hell for the last 10 years because of my complaints
02/03/10 Rb
-2

Id have the bike crushed, Nick the Lad for no tax/insurance, and send in the social workers to formally warn the parent(s) of their obligations.
30/01/10 Plod
-13

My husband and I have had a nightmare with a so called policeman. He has accused us of hassling him! This is in fact the opposite. We have been followed and still are for instance. Apparently my husband who is a very sociable individual stood next door to this policeman and talked to a long-standing friend (30 years) and we were looking into this policeman's house. We have abused this policeman's dog - in fact his dog who was off a lead attached and bit my dog and we had to take our dog to the vets. We told the policeman to put his dog on a lead and he told us to ".... off! He has turned this around and he his believed because he is an officer of the court! Sadly as a policeman's daughter I believed and trusted the police; now I do not we are living in a nightmare because if he does not win this case, he will just trump-up other stupid charges. He is a bully and is using the manipulating the system to help his aims. We are hardworking, respectable hardworking people who are Jewish, and this deeply offends him as he has already called me a Jewish ..... and of course nobody was around other than me to hear him. We do have a lawyer but feel helpless as we are not believed! So we are very angry and confused as we do not understand what is happening! So far he has lost my husband his job and we have put our house on the market to move from the area because we do not know what he is going to do next! Rationally I hope this will all come good - but the damage it has done to us is irreparable.
16/12/09 Hassled
-4

Fed up with CHAV's with bi

Im sure he's an absolute angel just like you...complain...oh what you haven't is that because your in the wrong and the copper is doing his job?
05/08/09 Fed up with CHAV's with bi
-10

I'd like to say Silvershadow, you are a good parent whose child behaves properly. I just wish the police would go after yobs who cause trouble rather than your son.
02/08/09 Terry
-7