Coming into work this morning I got stuck in a traffic jam, yet again!  I am beginning to get seriously fed up with this nine to five rat race.  Maybe I should just give up working and go on the dole, because life would be so simpler and less stressful.  I would also have time, which is something that money can’t buy.

The problem is simply the attitudes of those people in charge.  I use that term quite loosely because as far as I can see ‘in charge’ seems to mean just telling people what to do and making their lives a misery.  Why can’t they see that flexible working hours and even working from home would benefit the business?  A happy employee is a productive employee I would have thought.

I simply detest this nine to five culture that has existed for as long as anyone can remember.  We all trudge in at the same time and leave at the same time every day.  This inevitably causes queues, traffic jams and stress for everyone.  Why can’t we all work at different times?  It’s the same old story every day; tick-tock, time is money, can’t be late but can you stay at work late.  We want performance, deliverables and results. In fact we want your blood!!!  I know it is happening to some degree, but it would seem some bosses are really slow to catch on to flexible hours and still insist that there are bums on the seats nine o’clock every morning. 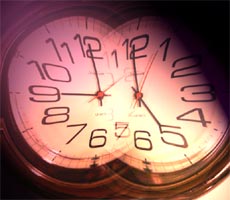 Apart from the obvious traffic problems, consider that everyone, or almost everyone is in work at the same time, you need to get your car serviced or pick up some shopping so you do it at the only time available, weekends and lunch times.  This creates yet more peaks with everyone out and about at the same time; the end result is more traffic, more queues and more stress.

Just think, if we didn’t all hit the roads between eight and nine every morning, how much cleaner the air we breathe would be?  I dread to think how much air pollution is down to people sitting in traffic jams just because the boss insists that they’ve got to be in the office by nine.  Just think how much less petrol and diesel would be burned every morning, depleting our precious oil reserves.

The bottom line, the nine to five lifestyle is not for me anymore.  I deserve better than languishing in this cesspit of misery called ‘commuting’ and ‘the nine to five working day’.  I may well end up financially challenged, but I’m willing to bet I’ll be much happier.

The problem really is that there are so many idiots in this country who choose to live more than 50 miles away from work. That's sheer stupidity isn't it?
22/10/13 Nick
-2

Oh and a second thing, re:Limedog's other half's work.
Tell his fellow colleagues and boss that if they stopped fart-arsing around on facebook or dating websites they might get to go home at a reasonable time most days, instead of staying for the sake of it when there's hardly much to do.
22/06/13 ahforfoulkessake
0

I think most of you have sensible gripes and the stuff about the working hours culture in the UK is spot on.
Not so much the length of hours but the fact everyone has to be there at a similar time and go home at a similar time, though going home before a certain time is seen as skiving at some companies.
As someone who's worked both shift patterns in warehouses factories and on building sites outdoors (where daylight is important for doing the work) I say make every company consider flexitime if they don't have to do what they do 9-5 as that would ease road traffic and you could get a seat on the bus or train.
22/06/13 ahforfoulkessake
2

When you are caught in a traffic jam, have a look at the cars around you. I bet half of them don't have to be on the road in the first place. These include: dole scroungers driving down to Jobcentre to sign up; pensioners/dole scroungers driving to post office to pick up their dole with their dogs on board; chavs driving around having fun, etc. The problem with this country is there are too many people who ain't got fook all to do but are just fooking around.
17/06/13 Nick
-13

The problem is that when people say they do 37 hours a week standard, in reality they usually do much more than that. Then, when the company uses the company man hours to decide how long a project will take to complete, they use these false figures for the next project which in turn increases the hours we have to work even more. This is why so many projects are late, even though we work ridiculous hours. Also, we have this culture in the workplace where its frowned upon and even job threatening if you dont stay in late - its so wrong.
23/11/10 D-Jagamo
-11

Sack your job off and become an artist..its a fxxxng doddle. You can easily make your salary and you don't have to bother with daily 'how do you do's' or miserable biscuit faced fxxxng collegues pretending that they like you!
Buy some paint some canvases pack a tent and fxxk off to France, Italy or Spain. This country is full of cynical fxxxers who pin you down with their 'oh you bet not do that or it's a bit of a risk' fxxk them take the plunge...or you will be the next statistic. Do you really want to part with 75 percent of you living days to being a slave? Pack your backs and do it....cliche...but life is no rehearsal
28/06/06 Van fxxxing g..off
6

I hate traffic jams too! Unfortunately I have to travel on the M25 a lot, at least 2-3 days a week, sometimes every day. Stressed is NOT the word!! I found a website: ihatetheM25(.co.uk) which is great cos you can rant and let off steam, heh heh. AND you get a fab email address too.
15/04/06 queenbitch
-2

I totally agree with the original gripe. I get up at 6am , leave at 7.30 to get to work for 9am - a usual 45 min journey at rush hour takes 1 hr 30 mins. But I like my job very much so I gotta put up with it . My other half has to start work at 8 am - takes a hour to get to work , his company he works for is basically a gestapo toilet and the hours are 8am till 6pm - even though no ones actually starts calling the office until 9am. He works relentlessly , doesnt take time off sick cos they will sack him for that , has over 31 final warning letters for being in two minutes late , ( what about all the times he works till 8 or 9pm at night? ) at the end of the week is physically and mentally exhausted , sleeps all weekend . You could say that he should leave - but you know how it is - when you wanna leave you can get another job! - I feel out of the 7 days of the week - its not right that only 2 days of that week are for your own personal time. Its all very well if you like your job - but a prison sentence if you dont.
its all work and no play - even when I go to see my dad on a sunday I'm sitting in a queue on the M1 - how are we rewarded ? speeding fines , toll gates , possible new black box in cars charging you by the mile to drive on the flaming road - etc etc
07/02/06 Limedog
3

Being an electrician I have to drive to work and around at work to do my job and everyday get stuck in jams with suited persons alone in thier cars,These people do not need to drive they only have to take paper from home to an office and could easily do this on public transport. However as these people are all seriously overpaid for shuffling paper they can easily afford any petrol hikes or other ideas the government uses to get people out of thier cars so the only people who suffer are the few minimum wage workers who drive to work as there are never any buses anywhere that arrive before nine oclock.
30/12/05 Kev
-18

hmm yeah lets open all the shops 24hrs a day - just as long as we dont have to work in them. how do you all think you were able to shop right up until the last minute on christmas eve and then first thing on boxing day? Also RP lazy assistants I think not we start at 6am where I work an work till 8pm we dont all do 9-5 like you claim!
28/12/05 mark
-1

I agree with everything this articles says. The working culture of this country is completely out of date. In fact, workers in Great Britain work the longest hours in Europe. Why on earth do we work an average but arbitary forty hours a week? During the industrial revolution, many philosophers believed that there would be far more leisure time available to us in the future. Indeed, the American thinker Buckminster Fuller felt that 90% of the work undertaken by mankind served no use whatsoever. For those of you who are interested (ie: not you RP) here is a list of websites dedicated to the delightful anti-work message:

Actually Bill, it is called . . .ahem. . .lazyness. Lots of people get up before dawn because they care about what they do. Those who don't, have no care in the world, they bash their brains to the point of. . .well. . . hysteria. They cannot ever conceive the idea that some of us get up early because it is the right thing to do! No matter what ailments they might have, some people manage to pull their weight! Some don't, but that is their problem.
09/12/05 RP
-7

Village road used as a rat run by traffic - so what?