We're all in a hurry to get somewhere during the rush hour, for example going to work, dropping the kids off at school, shopping or returning from any of these places.  But what really annoys me are those individuals who think that their journey is far more important than yours.  Well judging by their behaviour that's what they think at any rate!

Picture this if you will.  You've just come off an exit at a roundabout and you've joined what appears to be a very long line of traffic.  In the distance you can clearly see signs indicating that the dual carriageway has had a lane closed and traffic is moving in single file.  The line of cones tapering towards the single lane would leave drivers no choice as to how to proceed...  or at least you would think so.

You've seen what's up ahead so you do the decent thing and you move over into the lane as soon as you can.  Sometimes the traffic has already started to queue up but at this point most drivers are courteous enough to let you in.  You get the odd pillock who drives on the tail of the car in front determined not to let anyone in, but that's their problem.  After a little while you're crawling along the road with all the others and suddenly you realise why the traffic is moving so slowly. 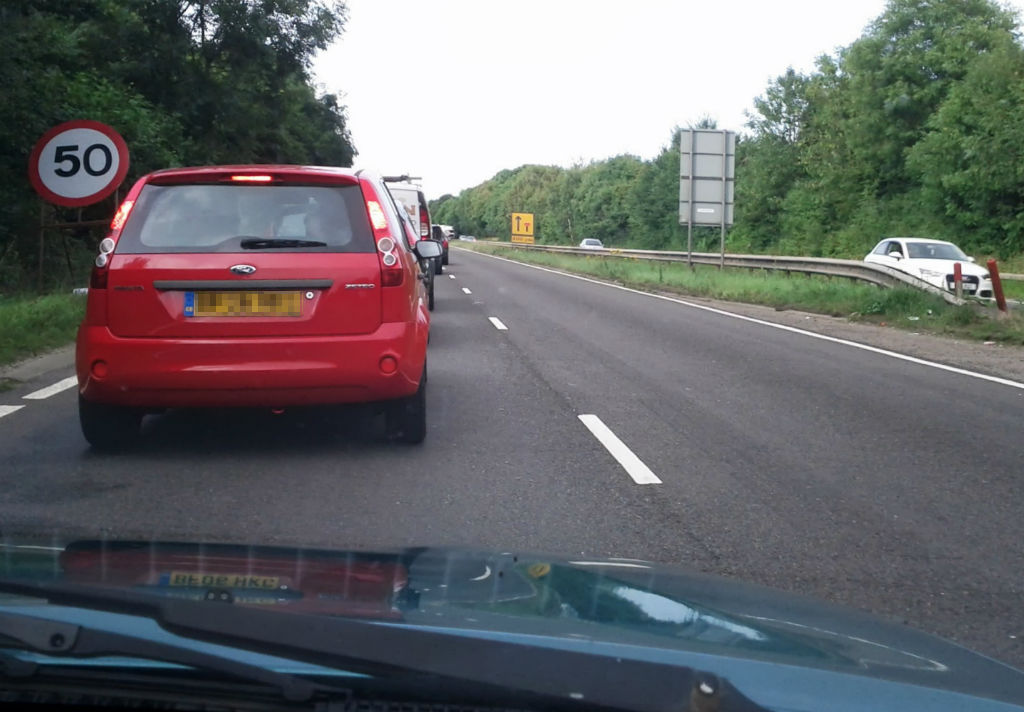 Perhaps it has something to do with the selfish prats who come flying down the lane that is being closed only to push into the queue at the last minute, no doubt bullying their way in because they think they're better than everyone else.  Their journey is far more important so why should the join the queue at the back like everyone else.  Oh but it isn't really a queue is it?  We're all lining up here because we're really not in a hurry to get to work after all.  Go ahead, don't mind us...  we'll just wait here while you push in and get to where you're going first.

You see a lot of stupid selfish behaviour every day on the roads but this is one of the things that really winds me up the most.  I'm pretty sure these people wouldn't do that to others standing in the checkout line at a supermarket (or maybe they would), so why is it that they feel they can get away with it when they're on the road inside a metal box?  If anyone can answer me that I'd love to hear why because I just can't comprehend their behaviour.

So everyone who's been stuck in the queue of slow moving traffic for ages gets stuck there even longer while drivers who have decided that they are better than everyone else and shouldn't have to wait can go storming past and jump the queue?

That's the way to make yourself popular Mel!
17/01/20 grumpyoldwoman
1

Why not just give other drivers the benefit of the doubt and not assume they are queue jumping? They could be on unfamiliar roads and not realise the lane will end, sign or no sign. Sure some people queue jump, but you don't know what's going on with any particular driver so why wind yourself up. I just let people in -- all drivers are innocent until proven guilty in my mind.
17/01/20 Mel
0

Technically those who use all the lanes up to where they merge are right, studies have proven that correctly done 'zip merging' (like the teeth on a zipper) is the quickest way for everyone. https://www.rac.co.uk/drive/advice/driving-advice/zip-merging/

You should follow the signs and road markings and get into the lane as directed. In congested road conditions do not change lanes unnecessarily. Merging in turn is recommended but only if safe and appropriate when vehicles are travelling at a very low speed, e.g. when approaching road works or a road traffic incident. It is not recommended at high speed.

Of course those unwiling to merge in turn tend to screw things up, but correctly done the should be two queues up to the merge zone.
02/05/18 Timelord
-3

Here in the USA we have a lane for entering and exiting a freeway or highway. The lane only exists for about .4 kilometers and is reserved for the purposes of gaining speed to gracefully merge in or slowing up a bit when coming off the main highway.

So what I see where traffic on the main highway is heavy or crawling are those who exit into the on/off stretch simply to gain a 100+ car advantage by jumping off, then jumping back on closer to the end of the temporary lane. And when they get down to it, if they aren't allowed back in right away, they will continue past the temporary lane driving along the shoulder until they find a space to dart into causing people up there an additional headache.

Yes, rudeness is the standard for a few who put a damper on or ruin a commute for nearly everyone else. Of course we can not possibly afford enough patrol and enforcement to catch all the many violators, so instead we have what approaches a daily anarchy, fostered by this derelict segment of our well-meaning population.
29/09/17 DrivenCrazy
0

And prey, what do you expect us to do, wait in a queue like the rest of you little people?
25/12/13 We command respect
2

The ability to drive is not governed by the propensity to put your foot down, push in front, cut up and generally drive badly on the roads. Its being very aware of those around you and ensuring your actions do not cause others to become injured or distressed by your actions.

With every greater numbers of road users being on our roads we can no longer leave it to individuals to drive in a safe and efficient manner.

Luckily we are now working on technologies which will stop idiots causing problems on the roads (in fact much of the technology has been sorted we just need to start progressively implementing it). For example right behind adaptive cruise and sat navs are IP based solutions which manage vehicles in a uniform and safe manner. In other words all traffic on the roads can be controlled by computers. We already do it with aircraft in 3 dimensional spaces. These capabilities will be coming into service in the near future and eventually you will not be able to speed, cut up others, jump the queue or generally feel you’re more important than others on the road.

The IP networks will do that for you. Your car will always by running at its optimum efficiency and will not speed to catch up with others in front of you causing you to push in and distress other motorists.
11/12/13 ChangesAreAComing
-2

JohnnyB, you pretty much said exactly what I was going to say. People just cannot, or will not grasp the concept of "merge in turn". In a town near me, we have two lanes up to a set of traffic lights which merge back into one lane. This clearly, is to prevent traffic building up down the road and blocking entrance to the train station and car parks. However, "everyone else" likes just use the left lane. When I dare to use the right hand lane, cue a barrage of head shaking, scowling sometimes horns and people trying to race me in the left lane. I've even had people try and force me out into the right hand lane when the merge is closing up. To them, queuing like the rest of the plebs is more important than human life.
22/10/13 tinsel
2

its is the slow drivers that cause the accidents!!
if drivers were capable of using their common sense when it comes to speed there would be no need for speed limits- its hard not to break the speed limit when getting stuck behind a slow idiot in the fast lane then having to undertake the slow driver only for this 'slow' driver to then decide to play games and speed up just to antagonise the other car even more!! its people like this that need to be banned!
13/09/13 peed off
11

seriously it's hard not to push in when half the time i am stuck behind that idiot in the soft top cruising along doing 15 to impress his new bit of stuff when im on my way home from work racing to pick my son up!! every day this happens!!
if people stop acting stupid and actually attire to the conditions of the road when it comes to speed then people wouldnt feel the need to skip ques etc!
13/09/13 peed off
3

The slow speed of many on the roads does indeed suggest that their journey is less urgent than mine.
08/09/13 QueuePoker
11

@Maple Leaf
Would be better to ban those day people plodding along at 30mph on a motorway when there's no traffic.
05/09/13 You
8

I think you will find that they are already late in getting to their next accident.
03/09/13 silverfox
2

The Highway Code is very clear on this, Rule 134 states motorists should stay in lane, follow road signs and markings and 'merge in turn' when the lane closes.

Unfortunately the British, with their queuing mentality, just cannot get their heads round this fairly simple concept.
03/09/13 JohnnyB
8