I am an Orange Mobile pay as you go customer and I recently got a new (second hand) phone.  I've been on their fixed rate all day tarrif for as long as I can remember and I figured that since my "new" phone had an HTML browser, I'd see what packages I could add to take advantage of that.  I've been aware for some time that they offer a reward system whereby you can get free texts, minutes or Internet access if you top up by at least £10 a month.

This isn't something I've taken advantage before as up until as I barely spend more than a £5 a month.  Orange do these animal packages now (what the hell is that all about anyway??) and there's a range of different options depending on your needs.  Some people need more talk time while others want music, texts or the Internet.  The problem is that Orange's advertising both on their website and on their automated messaging system is quite ambiguous almost to the point of being downright misleading.

For all you fun-loving, sociable types, Dolphin plans give you unlimited free texts and free Internet on your phone.

For example, I was interested in the "Dolphin" package and on their website it says "Love Facebook & Bebo?  For all you fun-loving, sociable types, Dolphin plans give you unlimited free texts and free Internet on your phone." That implies that you get access to the Internet right?  I then rang orange on 452 and the message said "If you're a bit of a Facebook, Twitter or Bebo fan you'll get free unlimited Internet." Well this just sounds absolutely fabulous I thought. 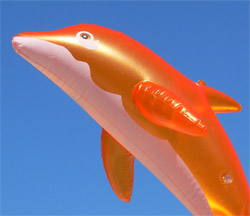 I thought I had better dig around a bit and find out as much information as I could before I changed my call plan.  On the Orange shop website a different page said "unlimited free texts plus free access to Facebook, Bebo and MySpace".  I then dialled 450 and went through the various options to get to the orange shop that way and for the dolphin package the lady said "free texts and free Internet".  This was at the point where I could actually change to the new tariff and I was warned that once I moved I wouldn't be able to change back.

I started to get suspicious and decided to call Orange customer service to find out the truth about the "Dolphin" package because by now nothing was clear to me and to me, free unlimited Internet means just that - not three websites that I never use.

I spent a while stuck in the automated menu system again before making it through to an option that said it would transfer me to Orange customer service... with a one off charge of 25p.  Naturally I hung up and used the land line free phone number instead.  With about 15 to 20 minutes of being passed from department to department and of course being hung up on at least once I finally made it through to the pay as you go customer service desk.

The customer service representative I spoke to didn't try to hide the information from me, although I had to explicitly ask whether or not the free Internet access with that package was only for certain websites.  She confirmed that it was and it was only for Bebo, Facebook and Myspace (what happened to Twitter as mentioned on 452?).  Internet access outside these sites would result in additional charges.  Interestingly enough, I was even told by this person that other customers had been complaining about the lack of "free unlimited Internet access" with the Dolphin package.  When did Bebo, Myspace and Facebook become the Internet anyway?

So what do we think... misleading advertising?  Trading standards anyone?

By: An Orange pay as you go customer

at mr angry
ye that happened to me, i'e i bought £10 worth of credit but didn't realise you have to wait for them to "activate" your internet allowance, checked my ee orange page and went through a fair amount of credit ( iirc it was about £7.59 ) and i didn't find out the aforementioned until i rang customer services

Typical of this dishonest company. I've been away from the UK for a while but still have a SIM card registered with Orange. I also found the websitem ambiguous. I topped up with £10 and saw that I had 1gb Internet data. I went online and used 90mb. Fine. But my balance had dropped to £8.45 without making a call.

Been stung for £30 pounds of credit in just over a week while making very few calls! & zero calls on last &poumd10 top up, & very limited internet browsing. Feel massively ripped off & surprised that this kind of rip off still goes unquestioned in this day & age!
Cutting up "Dolphin" sim asap!
09/09/15 Kev
1

Over-fishing is still the problem! Or is some restuarants that have sharks fin soup cooked in their kitchens oil via pollution all global problems? So many problems still! We wouldn't have all these problems if there wasn't so much fishing. Just think would we have a dolphin crisis if people just ate sustainable species of fishes? Or a Greenpeace boat in the sea if we didn't know or care where the Japanese harpoons were? Every problem solved by saving dolphins generates two new problems.

If man wants to eat fishes why can’t we provide an easy way to catch them a, net that doesn't harm the dolphins in any way? A bigger net or a pole-fishing fashioned worked into something industrial. Where's your inventors, come on, come up with a multipurpose fishing method.

Luxury eaterys, will contine selling the fish by that I mean the non-sustainable types. Well theTescos is actually doing something about it in it's stores. They celebrate dolphins, which are really the same as Porpoise.

,He makes you forget that his ship is setting sail for Treasure Island in the morning. xboter 2014
18/08/14 Lurrybhqrevpahfe problems. Puuglwlenegwxcuodudq
0

,On the inner side of the tower there is a reconstruction of the rampart walk in a height of 7 metres. xboter 2014
16/08/14 Vivzfigghioesb I'll scratch what I Ikyghzqbqbhdaij
0

,Trying to think of things to do for a childrens party? xboter 2014
16/08/14 Jqsdpqxdrh Contact No. Aptlbfvnklissniukdbl
1

Hello every person!I also do a great deal of sites, from design to code. (Photoshop -> XHTML CSS JS PHP).So I may help in those items as well, feel no cost to inquire about them.Many thanks
23/07/14 Bobbi Rasico
0

I saw the thread title right here and considered why not say to every person that's a member in this article.
16/07/14 Carroll Lester
-1

I am in the UK for 5 days (I live abroad) and need pay as you go sim with data. I went to Tesco, explained my situation and was sold an Orange dolphin sim on the basis that I could top up Â£10 and get 1gb of data and 400 texts for free. I followed the set up and registration instructions (in the shop to be safe) and all seemed well until a couple of hours later I got a text from Orange saying I only had 85p credit left! I contacted the the call centre, at a further cost of 25p, only to be told that the package takes 48 to 72 hours to activate because its an automated system! I'd used up all my credit checking a few emails. I hadn't even made any calls or texts! This info regarding activation was not on the sim packaging, and it seems you only find out after you've paid (and lost!) your money. The Indian call centre was very unhelpful, as to be expected. I then wasted a good deal of time returning it to Tesco, who would not take any responsibility, would not give me a refund, and who told me to go to the EE shop, which I did. They were surly and useless, said it wasn't their problem and put me back onto the call centre (great, more of the same unhelpful cr*p!). I was told to go back to Tesco, which I did. I complained again to someone else and eventually got my Â£10 back. I got to keep the sim, which still hasn't been activated. Dreadful customer service all round, and what a scam! This is just plain miss-selling. I will be avoiding Tesco and EE in the future.
10/07/14 Mrs Angry
1

I'm. very happy with dolphin plan get unlimited text and internet and get to keep my nowÂ£20 I do I do magic numbers for 25p. brilliant keep the good work my friends love it as well
26/03/14 2 happy
0

pissed off mum of teenager

Orange must be p***ing themselves laughing everytime someone tops up on the dolphin package, you think you've got money on your phone when you check your balance you'll find out you've only got a couple of pence left, how orange get away with ripping people off is beyond a joke, at least Dick Turpin wore a bloody mask
07/03/14 scouseblue
0