I'm sick and tired of lazy dog owners and the way they allow their dogs to foul the footpaths in the town where I live.  In the last few years they have rapidly transformed what was once quite a picturesque and bustling mining town into one great big dog toilet.

There's absolutely no excuse for this other than sheer laziness and a pig-headed "I'll let my dog crap where I feel like" attitude.  These people obviously don't give a damn about the place where they live and I should imagine that their houses and gardens are equally disgusting.  There again perhaps not, because they bring their animals around to foul the streets outside my house don't they?

The lazy dog owners and the fouled pavements really annoy me, but what annoys me even more is the fact that they seem to get away with doing it without any repercussions.

Fixed penalty - There are signs posted on practically every lamp post... 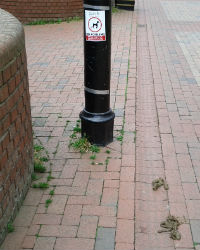 There are signs posted on practically every lamp post (and I mean every one) warning that there's a fixed penalty for dog fouling, yet they still do it and they still get away with it.  Presumably no one ever (or rarely) gets a fine, because the amount of excrement on the pavements would certainly seem to indicate that this is the case.  I feel so strongly about this now that I'll be contacting our council regarding this.  In fact maybe some photographic evidence would add weight to the case and some of these blighters can be fined!

I must admit that I've not actually seen anyone in broad daylight letting their dog foul the pavement.  Presumably they are ashamed to do this in public and quite rightly so.  But my partner has on a couple of occasions recently witnessed a dog in the act of fouling with its owner patiently waiting whilst it does its business.  There's nothing wrong with that because a dog must go.  However, on each of these occasions the owner then carried on walking their dogs with absolutely no attempt made to pick up the mess.

As I said earlier, maybe some photographic evidence would result in a fine and then perhaps persuade these people to change their ways.  No one wants to be a 'poop detective' photographing dog walkers, but something needs to be done because it's a smelly disgusting health hazard and it's turning the town into an eyesore.

By: Fed up with lazy dog owners

It's disgusting, i would like to rub the owners faces in it when i see people allowing their Dogs to foul on the pavement. If you have a mobile phone on you & witness this then photograph them & send it to your local council & post the images online!
10/05/17 Jason
1

I quite agree, my town has the same problem. The council used to clear this up but don't seem to do this anymore!
27/01/17 Polly
-1

I have just watched a tv prog of CCTV footage. It showed in the main, drunks fighting drunks. I am not sure why they want to stop two drunks fighting. What harm are they doing? Why do the authorities who are so concerned with fighting, ignore dog walking (Shltflingers). They must have them on camera also. They filmed a poor guy who had taken short in a flower bed. What was the guy to do? maybe he had bought a bad pint, which can have a catastrophic effect.
22/03/14 boblet
1

The dogs themselves sometimes have difficulty - I Agree with you. The nasty things that get in their pelts and body, hair, ticks etc. contain nasties like poison, venoms and other nasties that react on the skin when exposed to sunlight.The creatures are so agressive that they bite into the skin - just like those bats for biting or sore patches - all absorbed into the bloodstream.
Skin cancers, and other illnesses are just the tip off of the iceburg some of the real horrids created by the thoughtless owners and bad insects and arachnia.
21/03/14 collar
0

Still Rover it makes a nice little al-fresco snack for you and you're fellow doggies doesn't it, as most dogs don't turn their noses up at a bit of pavement pizza.
21/03/14 collar
0

Funny how humans complain about dog poo, My name's Rover and I think you humans are disgusting for leaving your litter everywhere. And when you stagger out of the pub after pissing your benefits up the wall, you up-cuck on your way home to the place where you dos. I say, when you lot clean up your act I'll use the toilet at home. Fair's Fair.
21/03/14 Rover
0

T Uk your observations are equally valid along the canals or indeed any exercise area that dog owners frequent, dog owners seem to be unaware or not interested in the low opinion that ordinary folk have of them. I would love to read the opinion of a dog walker with ref to the dogshlt trees springing up in our rural areas.
21/03/14 boblet
0

Just finished a 10+ miler walk with my mate Mark England! We started at Dovedale car park. We started off climbing Thorpe Cloud from the ilam side and dropped down onto the River Dove where the stepping stones cross the river. We then followed the river towards Milldale but went up another path righ opposit a famous site known as lovers leap. A high limestone outcrop that some eedjit must have jumped off after being spurned. The approx mile walk from the stepping stones to this path that took us back up over the top ridges overlooking the valley. we counted (because they were so obvious at this time of year) 27 bags of dog sh#t! They are everywhere! It's disgusting. all colours. we found a pink bag close to a picnic area. And a transparent bag which clearly showed the contents (pictures to follow) also close to a picnic area.
Mark and I had to evetually give up after a bit of a laff after we counted in excess of 40 bags of dog sh#t carelessly discarded.
So called responsible dog owners. My a#se! i think you all do it. Why not leave it and let the rain wash it away?
This problem will not go away! The bags are not bio degradeable. They will be there for years. The bags will mount up and The 27 we saw in a public picnic area will mount up everytime those responsible dog owners visit the area. Eventually it will become a health hazard. School kids and scouts will be tasked to clearing the sh#t bags like they have done with cans and bottles etc etc! When will it stop? It's not just Dovedale it's everywhere dog owners go. The lazy b'stards should be filmed and shamed. The dogs should be taken off them. They are not responsible dog owners! But lazy inconsiderate, ignorant a#esholes. Who are ruining the countryside for us and our kids. Because one bag of sh#t will stay there for decades until someone picks it up for you. I think the time has come for action! We need to stop the dirty b'stards from continuing with their disgusting behaviour!
21/03/14 Tony UK
0

Dog owners should realise they are responsible for what their pets do. Dogs barking, as well as dogs shitting every where. Bring in a dog licence fee of £500 a year and steep fines for dogs being a nuisance. Then only real dog lovers would have dogs.
24/01/14 aunty poo
0

It is most curious how one never sees 'white' doggy dirts in this day and age. Only brown. Is it a dietary phenomenon are we led to believe, for instance, did dog owners feed their animals lots of peppermints?
11/11/13 Joe from Splott
0

@ Lucky the mongrel, sadly you are correct when you say there is little if any chance of these dirty beasts getting caught. Stepping in it with (or without) any footwear is nasty enough, but training shoes have their own inherent problems. Most of them have a series or pattern of very narrow grooves upon the soles, and these of course become tightly packed with the excrement. It is tempting to discard them completely, but if one has just spent a £100 or so quid on a pair this not financially viable. the outcome then is sitting for hours with a cocktail stick, safety match or similar and picking the horrid mess out bit by bit. Do this once or twice, and it is quite understandable to want all dogs culled, be it by gas or (much more satisfying) a high-powered rifle.
01/10/13 Heimie
0

You shouldn't have to pay to go to the loo